Posted by Ryan Moore on May 12, 2016
I like my music, whenever I walk anywhere, whenever I run... I want to have good music.  There's such a variety of ways to get that music from my phone into my ears and I just love testing them all out.

The latest one I've received is from Mpow, and is their Jaws version.  It looks very similar to those original LG Tone Infinim kind that have a band that goes around your neck, and at the end are little ear buds that detach and you can bring to your ears while the band stays around your neck. 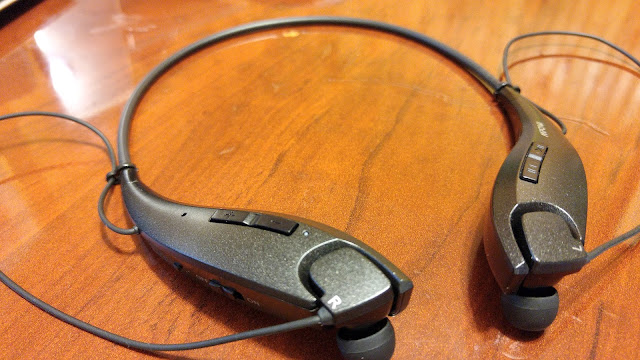 I get it, sometimes having wires is just messy and get in the way and sometimes those around the ear types just don't clip well.  This is a nice mix.

The band is weighty enough to rest on your collarbone and you get just enough slack to bring the earbuds up to your ears.  When you're not listening to music you can just put the earbuds back to the edge of the band and there's a magnet that holds them in place. 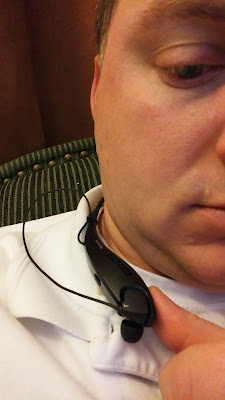 Unlike the Tone Infinim, where the cord is retractable, the cord is now dangling around your neck... but it's not to much, and if you needed to you can use a little ring on the band and it's also around the slack cable and you can pull it so that it's flush.

Pairing the device was simple (really, should anything be tricky these days) and I like that you get separate buttons for both volume +/- and you get buttons for <</>>.  It's always such a pain to try to remember which headset uses SKIP or PREV for the volume, or do I long press volume+ to make it go back, or make it go forward.  Aggravating.

Not so with the Jaws. on the left band is the skip / prev controls and on the side of it is the play/stop button.  On the right is the volume controls, the power switch (due note, it will vibrate... a lot ... when you turn it on and/or off, like more than you think it would) and the microUSB port (be warned, it's a little tiny, and a little tricky to get the flap out of the way of the port ... I'm expecting it to not last so long).

The right also has the microphone for when you use it as a headset for phone calls.  Which is a little awkward to me as the left has the button you'd use for answer/hanging up a call.

But how does it work?

I actually really like them.  The loose cable when it's slack isn't bothersome and when I put it on I hardly notice the band at all.  I put them on and even forgot I had them on later when I tried to go through security at the airport.  That comfortable.

The sound is ... alright, no big boomy bass, no tweaking highs... it's got a good range tho'.  I had a couple 'glitches' here or there with sound (like skipping) but I think that's more my phone as it was multitaking several things and watching a movie - but for the most part it was issue free.

The only real issue I could complain about was that if I used it while jogging it bounces, and it's resting on my clavicle so you always felt the 'thump' 'thump' 'thump' as it bounced on my collarbone.  No biggie, I just won't use it while I'm jogging.  I've got other sets for that. 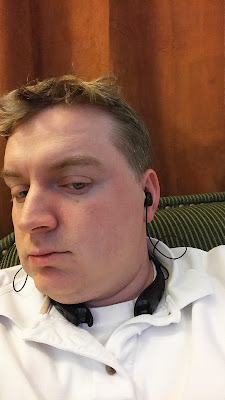 Battery was good. You get a meter on the system tray to give you an idea if it's getting low.  I watched a 2 hour movie, walked about an hour and then listened to music for almost another 2 hours and I haven't seen the meter move.  Even if it's one of those meters that only moves when it's at half battery (i.e. FULL / HALF / EMPTY) that's pretty darned good battery life.  Kudos to Mpow for that!

On the other side, I figured I might look like a bit of a prat wearing these, but nobody has said anything to me about them or how I look wearing them, so... this seems like a win for $40