Mpow AquaPro is a near indestructible IPX7 speaker

Posted by Ryan Moore on May 14, 2016
It's just about summer time right now.   That means it's time to start getting outside more often.  I like heading to the beach at camp (I guess what you folks not in Northwestern Ontario would call 'cabin' or 'cottage').  And you can't be outside having fun without some music.

Your choice is either to get a speaker that can't get wet but it'll have to be pretty loud so that while you're in the water you can still hear it.  Or, you can get a waterproof version and take it with you.

The Mpow AquaPro is rated IPX7.  Is a nice option for under $30


So, maybe not take it INTO the water and swim... or at least no more than 30 minutes at a time.

The 800mAh battery should allow it to play for 8 hours (just so long as it's not all under water).

It has the option for line in as well as bluetooth (but why would you... even though it does come with a short headphone cable).  The controls are simple, O is power, > is play/pause, and the +/- is the volume controls (and the skip/prev if you long press, but I always forget which is which).

Oddest of all odds is that it has an SOS button.  You hold it down for 2 seconds and it makes a huge ANNOYING noise.  Don't test it out at midnight when folks are sleeping.

The speaker itself is a 3W driver and has a pretty decent volume with the sound being a little heftier on the bass than the treble.

Overall, for $30 it has the heft of being a device that you know can survive a fall or 2 (or more) and feel safe taking it to the water's edge.  Definitely worth it! 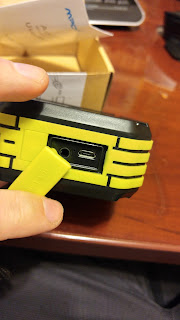 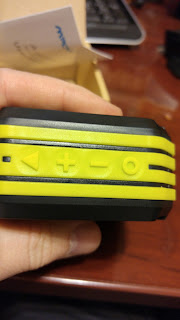 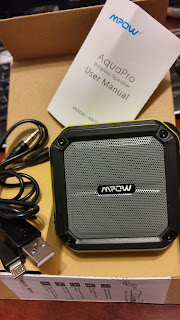 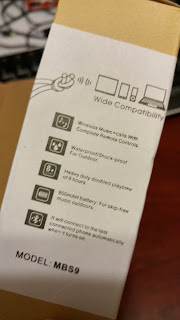