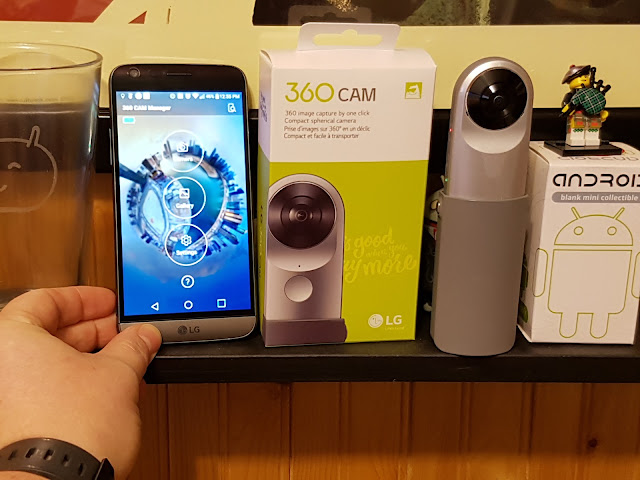 LG really tried to go in a new direction this past year by making a series of 'modules' and accessories for the LG G5, called their "LG Friends".  It's very cool and really throws up the shade of things to come with devices like Project Ara.  Today, I'm going to show off the 360 Cam, which, in my opinion is the coolest of the accessories.

The 360 camera is very cool, it will need its own microSD card tho', so get it ready, otherwise it won't do much else.  But once it is up and running, using the 360 Cam manager app and connected to your phone it's very cool.

Now, keep in mind - connecting isn't an instantaneous situation it does take a few seconds.  Not really long, but just longer than you think.  So when you want to show off to your friend how it works it's going to require some patience.  The other deal is that in connecting it doesn't use Bluetooth (well I think it does in a basic sense), but uses WiFi to connect, so it kills any WiFi connection you had previously been using (and sometimes I have issues reconnecting to the WiFi connection after I disconnect).

When on the device can snap pictures (you don't have to connect to the phone) with the trigger button on the device,   Or you can hold it down for a second or so and it'll start recording video until you press it again.  The issue is that when you do that you end up with your hands always in the photos. 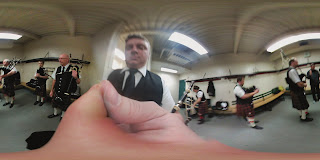 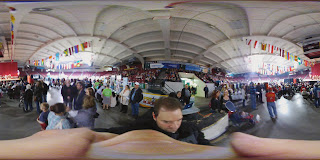 Now, connect it to the phone, run the app and then you can control the device with the phone.  Now it usually means you seeing me in a photo with my head down snapping the picture.  But remote capture is cool.

The little sleeve that the camera module comes in can be flipped around and you can set it on that for a little higher mini tripod (it does have the 1/4" screw for the traditional tripod if you want).

Reviewing photos from the module is not too bad and is nearly instantaneous as it downloads it from the module to the device.  A video... that's going to take a little bit longer, even a short video is a fairly large file, so needs to take a while to transfer over.

Then once you get to review, it's very cool.  Watching it on the phone is ultra neat, where you can swipe around and see all aspects of what it recorded (note, you can record just 180 degrees if you want).  Within the app I can zoom in as well.  So neat.  Plus, if you have the 360 VR it's a very cool to immerse yourself.

You can 'turn it off' with the only other button on the device.  Use the power button to put it in a sleep mode and hold power down for a few more seconds to power it off completely.  (in sleep mode it can be woken up by the app still, which is handy)

Now, it's all been fun and games up to this point.  The trick is to show off to someone else. You could give them your phone, or pop the VR headset on them, but that's not always easily done.  So when you want to share it a little wider you will want to share it out.

The problem is that when you wan to share it anywhere, it can lose it's 360'ness.

Luckily Google Photos now supports the 360 photos as photospheres (as you can see above - if you can't, go visit the folder I made - https://goo.gl/photos/HoCnyQu5LDKVVnU7A). But if you look through the folder it's not sharing the videos as 360 'immersive' style.  You either get 2 globes or an oddly wide video.  Nothing like you got to watch on the device when you shot it.

Even uploading it to youtube from the device you get both options, and I know Youtube does work with 360 videos, I'm just not sure how to make it so.

I'm still waiting to see if Google does it's magic and changes it to a 360 scrollable type video, but I can't see it happening. Youtube has a 'tutorial' for uploading videos, but I can't see the average user following that, it should just be easy.  At least in my opinion.  Facebook is supposed to support it but I couldn't figure it out.

Now, I imagine it's just a matter of time before Youtube or Google Photos will support, but in the mean time it's a bit of a pain in the butt for now.

Does that turn me off of the unit?  Not at all. I still love playing with it, and see a ton of potential for this neat little accessory. Even the $300 price tag does little to scare me off .  Sure, it's pricy, but I see the value.  Were I to have some spare cash I would pick it up (if I had a G5 of my own too, that's teh down side, is that it only will work with the LG G5)
accessories G5 LG Review video YouTube