[sponsored post]Onda V919 is a dual booting tablet for $140USD

Posted by Ryan Moore on April 26, 2016
I've not been a fan of the big tablets.  I used my Asus Transformer at 10" and it was a little unwieldly, the 8" size was about the right size for me.

And then there was the Nexus 9.  Aside from larger tablets, I wasn't a fan of the square size, but it seems to be popular... all those iTablets are that ratio and even a few more Android ones.  But, really, using a tablet has fallen away for me because my phone does all I need it to do.  What it can't do I can easily go and grab my computer for.

But, what if my device could do both?  These dual booting devices are popping up more and more. 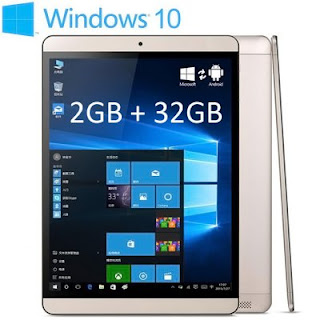 The other day I was shown a very cheap option, and then today Everbuying is showcasing to me the Onda V919.

Now, not as cheap as the other one they suggested, but at $140USD it comes with a fair bit:

You can tell this is aimed squarely at the iPad users as a viable alternative... same size and resolution as your iPad but it can do not only a lot more because it's on Android, but can do Windows as well..

I'm drooling over the battery.  7200mAh ... that's a lot of Pokemon time for my son.  Heck, hook that up with a bit of a stand, give him a controller and it's a new console for him.

I'm curious tho', with a dual booting system, how much of that 32GB is left over?

Have you tried a dual boot tablet?  Worth it?  The price is just about in that 'eh, why not' range... but not quite.