Galaxy S7 really is a phone ready to best the others


Recently with the new flagships released I would see a bunch of reviews heaping praise on the S7 over the G5, which I found hard to believe; the S7 just looked like a 2016 version of the S6, the G5 the real radical departure and innovator.  It boggled my mind.

And then I got it.  Now, I haven't tried the G5 for comparison, but I definitely see their point of view now.

For the longest time Samsung has been a real divisive device.  It's hugely popular with its mega marketing campaign, but then for those Android purists out there, the TouchWiz has been something that has held them back as something they could enjoy the true Android experience.

And for a while, they were right - it used to be a bit of a bloated device.  Samsung makes some great hardware, but they didn't marry it too well with software.

Well, with the S7; yes, TouchWiz is still there, but it is the best marrying of the software to the hardware I have seen.  This device is on par with even the Nexus 6P for performance and usability.  And I LOVED the 6P, to me, this phone was THAT good.

The TL;DR version is that this is a phone that you would not be embarrassed to use around even the Nexus purists.  It's a supreme user experience with a bunch of added features without bogging the thing down.

Let's get into it.

So spec-wise, there's not a lot different really between this and the S6, which is what had me a little dubious about there being a difference.  A little jump in the processor, RAM and less megapixels, but a better sensor.  Not a lot really.

The form factor isn't that much different from the S6 either.  A nice flat front with subtle curved edges on the back glass.  It works for the hands.  This year on the S7 there's a little more of a 'bevel' on the front glass. 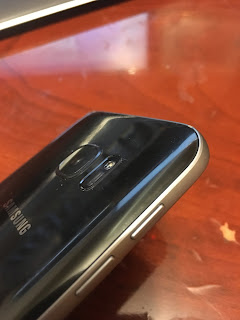 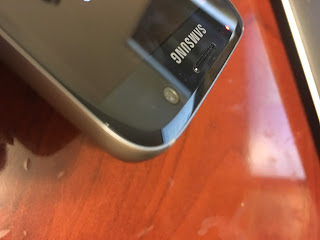 The back has glass too, but unlike other devices it doesn't seem to want to slide around (the Z5P constantly shifted)

I believe the power button has been moved more to the centre of the side, than nearer the top in previous models.  That's about the only thing that I could think of to criticize for the hand feel.

It, like just about every Galaxy device before it, has the home button, which is also a fingerprint scanner.  I've always said I couldn't quite get used to it, but that's a lie, within using it for any short period of time you're easily trained.  Same with the backwards-ness of the back/multi buttons.  Switching back and forth from my G4 to this I only made the mistake once or twice and then it's fine.

Okay, but let's use it... how does it really handle?

It really does.  My Nexus toting friends were suggesting I just haven't loaded it up.  Not true, I've loaded it up with all my exchange accounts, Google Apps, social media, cloud syncing, etc... and it still hums along just fine.

The Samsung 'bloat' of years past is not here.  It's really slimmed down in previous years as you can see with the other reviews (Note 5, S6), but it's really come to an apex here.

Okay, I'm trying not to use really overly gushing wording here.  But I was really caught unawares with how it was.  Maybe my expectations were pretty low.  I've been an LG fan for a while and stayed away from Samsung.  But this was a real treat.

Okay... back to the review.

Let's go back to that bloat.  On the device, sure there's some Samsung apps, but not many - 5 in total (that are Samsung specific).  There's more you can download later, and that doesn't include some of their built in features (not quite apps, but features), which will get into later; as well there's 6 Rogers apps thrown in and then 6 more Microsoft apps thrown in.  Compare that to Sony's (10 Sony apps and 8 3rd party and even more carrier ones).  Samsung is definitely optimized.

So what other features have they crammed in this time?


Some actually pretty neat ones.  My favourite is the new "Game Tools" where it'll automatically make a little folder of games that you install.  No biggie there, but the neat part is that if it recognizes the app as a game, you can have a little 'floating head' icon appear and use that for all sorts of game related tools, like turning off notifications (nothing is worse than having a notification pop up from the top on Alto's Adventure), but then it also has an extra option to watch top videos on those games (they really are preying on kids like my son who'd rather watch people play games than play the games). 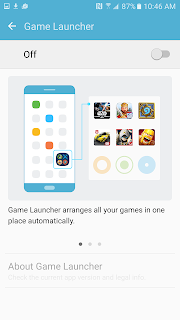 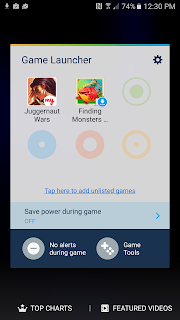 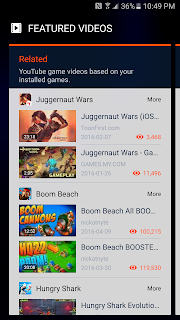 My favourite of those tools is to be able to screen record.  For a few years I've used different screen capture apps, which is fine.  It's just nice that it's built in. 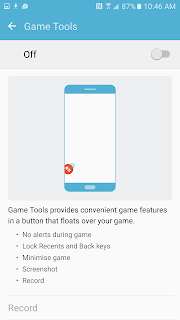 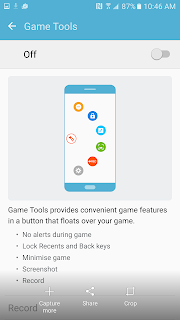 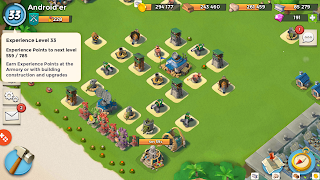 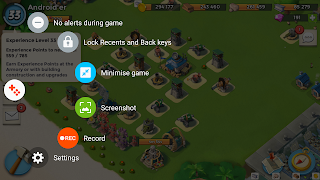 Do note, tho' for some reason when I captured the video and then when I went to the file in the Google Photos backup the quality was terrible (the video play back started to slow down and down and down where the 2 minute video became 18 minutes in the end).  Uploading from the phone direct to youtube is preferred.


I do love how it saves all the videos it creates in its own folders.  Now, it'll only do games, but if you wanted a work around for other apps, you can just say they're a game to get the features.

There's still S-Health (it does have that heart rate sensor still). 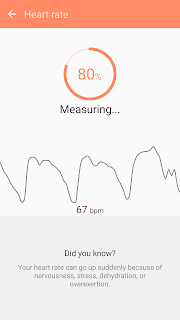 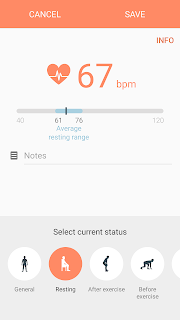 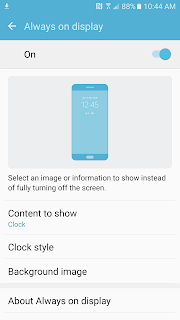 The always on feature is ... new.  I'm not sure how I'll like it.  But I was surprised to find out how little battery it used up.  At the end of the day it was still about the same battery percentage as if I didn't use it.  So, kudos to them on that.  I'm just waiting to see what other options end up coming out for it (right now it's IMAGE, CLOCK, or CALENDAR). 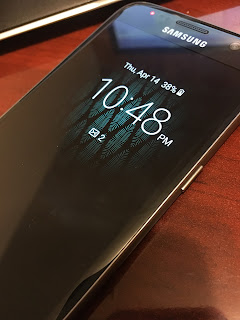 Best of all is the camera.  They really have made their best camera to date.  I've loved how much it's been able to capture in low light and reproduce a great photo with less grain than others.  Lots of features, like tracking focus or taking a short video slightly before the photo is taken (for a mini video of the just before you took the shot). 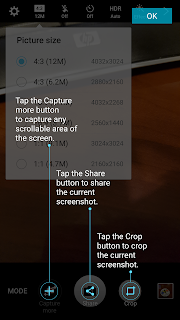 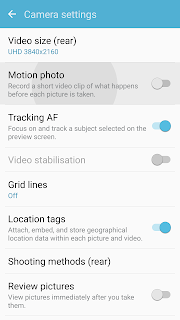 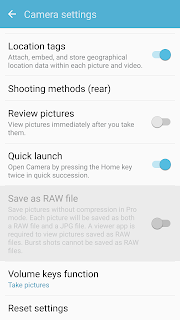 As is the popular trend with flagship phones there's a full manual mode to play with too (and I figured it out - how to get the RAW mode... it has to be in PRO, and then no extra scenes or filters etc...) 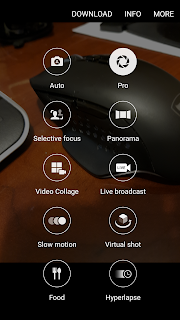 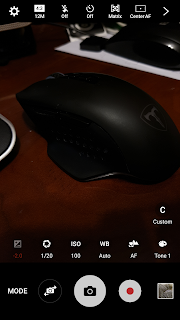 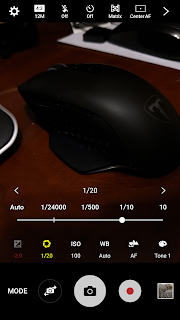 I love that they allow you to change the metering mode 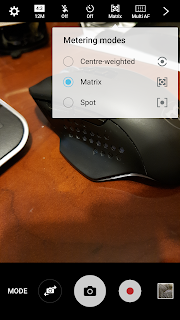 Sure, the app still looks a little cluttered, but it's producing amazing results (go check out our camera shoot out of the G4/S7/Z5P/6S).

Follow up to the camera is the editing of the photos in the gallery, the 'auto adjust' is nice, and ever so subtle (a nod to how well it captured the photo in the first place?) 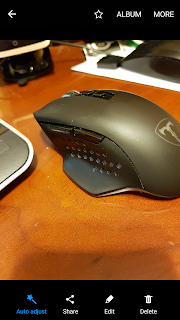 Overall, I was very impressed by the phone.  It's hard to call it a phone even. Speaking of phone, there's a neat feature where it will try to use a database to recognize numbers 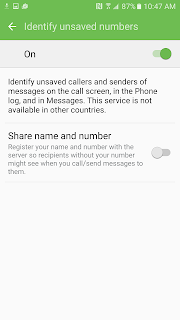 The smaller screen and the larger battery has really made for a great battery life, better than my G4 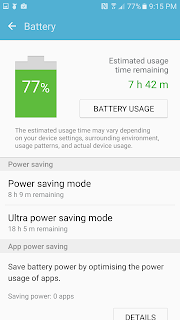 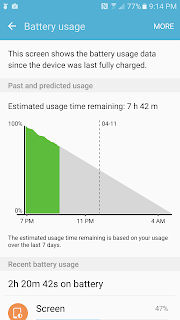 It's no secret that for the past few years I've been in the LG camp as my daily driver, and I can honestly say, this would be the device to break that streak (or the Huawei 6P).  The only downside of the device I can think of is that its a little small for me.  I would prefer something at the 5.5" side, but I didn't mind it too much.  Things didn't feel as small like they do on the iPhone 6S.

It's pretty telling, that the only thing I could find to nitpick about was the overall size of the device.  Sure there are some small things, but nothing that's even at a "dang" level, more of a 'oh, it's over there' thing.

Well, those are my thoughts on the device.  I liked.  Actually, I loved it.  And I think you would too.
Galaxy S7 Review samsung video