Posted by Ryan Moore on March 20, 2016
I just know +Mark Lastiwka will comment on my usage of the word imminent, but for some of the popular Samsung devices the wait for Marshmallow is a matter of days. 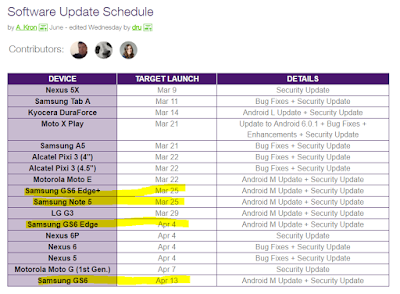 According to Telus's Software Update Schedule page the following devices are getting their update:

Odd that the Edge models can get it so much sooner than the non edge devices.  And the Note 5 was out way before the others (and that usually means they get the update later than the other).

Which device's update are you waiting for?