Is Google trolling us with Android N?

Posted by Ryan Moore on March 14, 2016
So, Android N has been shown off.  I find this entirely interesting.

Historically we've only seen the newest version of Android on the day it was released and released with a new Nexus in tow.

It was only recently that we started to see that they'd announce the version before official launch.

Who knows why there's this change.  Last year we heard about M at I/O ... so without naming it, and prior to the Nexus launches.

This year we're getting the Preview versions well ahead of I/O in order for us to play with it - let us find out all the neat things about it.  Build the hype for them, maybe?

Maybe it's to allow us (and seemingly the OEMs) more lead time to ensure updates for all (even non-Nexus) devices can happen sooner.  Who knows exactly?

Personally I think this moving towards a more iOS style of announce/release/launch is just lending fuel to the fire for the whole fragmentation.  We see that M adoption has been slow.  Some sites are using the fact that it's been 'out' for such a long time.  And with the varying of the dates, it's hard to say when it really had the opportunity to be available.

Well, that's a bit for another day to discuss.

What most people are really curious about is what will N be called?  There's plenty of options.

But one Google employee has had a bit of fun by giving us a tease with a post he used on Medium.  He initially says "Not Named" but then finishes with a joke of "Nut tellin" 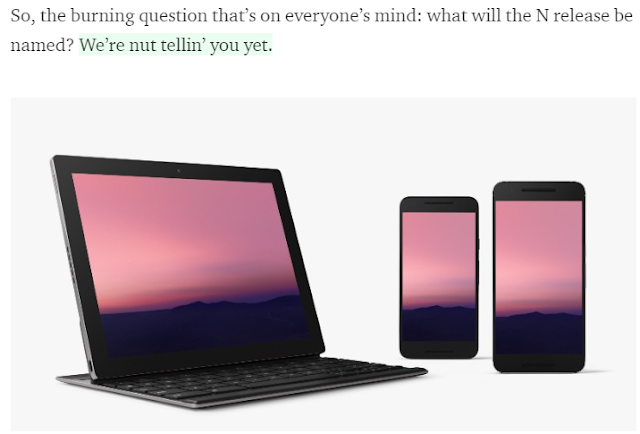 So, does this mean it's going to be Nutella?  Well, that would me partnering with the trademark company, which they've done with KitKat, so there's a precedence.

But I'm also thinking that during that same lead up time for K there were teases of the version showing a Key lime Pie icon ... to throw us off the scent (was always my thought on that).

Anyways, what are your prediction for the name?  Nerds (another trademark)?