LG's made a case that marries the Dot View and QuickCircle 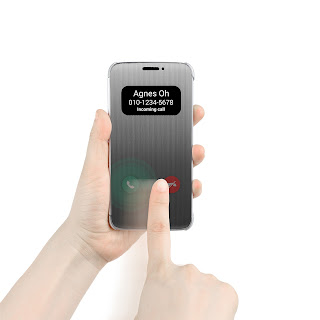 So, the rumour mill is just doing what they do.  Find little bits of leaks and share them as far and as wide as possible.  Who knows if they're right.  Maybe they are.

What is known is that they will announce 'something' at Mobile World Congress, and then just yesterday sent out pressers showcasing a new case for a 'yet to be announced' G5 device.

As you can see from the images they provided it looks like it's going to be some sort of hybrid between the Dot View from HTC and their own Quick Circle cases (which it's no longer a circle... more like the Samsung... what was it called ... S-View case?).

We can't see anything else about the phone but the black and white display (whereas previous circle cases allowed for full colour) definitely lends creedence to this 'always on display' they're rumoured to bring about.

Introducing a Case for a Smartphone That Does Not Officially Exist

TORONTO, Feb. 11, 2016 — LG Electronics (LG) took the wraps off a new version of its Quick Cover case, designed specifically for LG’s next generation flagship smartphone, LG G5, which does not yet exist. Known as a company ahead of the times, LG took this characterization to heart by revealing the existence of the accessory before the actual product.

The latest LG Quick Cover offers the advantages of previous Quick Covers but with even more features. The touch function, recently introduced on the K10’s Quick Cover View, is now available on the G5 Quick Cover’s semi-transparent mesh cover. It enables users to take calls and control alarm settings without opening the case for the ultimate in convenience.

The always-on display rumoured to be a feature in the LG G5 allows users to check the time, date and notifications with the case cover closed. LG also incorporated a unique film with a glossy metallic finish to enhance the smooth and luxurious look and feel of the cover for maximum consistency with the speculative LG G5.