Is Marshmallow the slowest Android version to gain ground?

Posted by Ryan Moore on February 03, 2016
Once a month Android folks give us a glimpse into the makeup of the Android landscape.  Developers want to know what version of the OS they should be targeting, looking for optimization, quashing bugs, etc...

The rest of the world likes to look at it and go "hmm...".  Android Enthusiasts like to tout what a diverse, multi-cultural type we are.  Anti Android types like to use it to show off what a toxic hellstew it is. 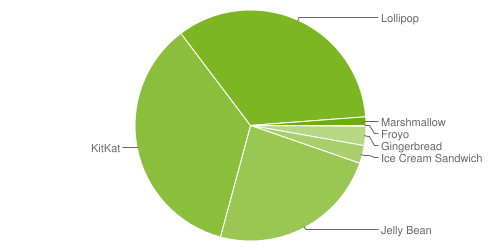 Data collected during a 7-day period ending on February 1, 2016.
Any versions with less than 0.1% distribution are not shown.
This past month's not really shown any change from the previous month's.  You can view it all on our database if you like to look it over.  Pretty much everything ratcheted down a 0.1% or 2, but Marshmallow grew by 71%.  Lollipop's 5.1 was the biggest winner tho'.

Sure, Marshmallow's 71% gain is nothing to sneeze at, but it still means it's at just over 1%.  Some are saying that this means Marshmallow is the slowest.

Only Jelly Bean 4.2 came close to it with 1.6% after 4 tries, and 4.2 was in that weird it's a new iteration, but it's still Jelly Bean era where most OEMs just figured they'd wait.

So... Marshmallow looks to be the slowest.  Why is that?

The Holiday season slow down?  There's still only at this time a small handful of manufacturers that have released it.  Hopefully by next count it'll have gone up significantly (HTC's M9 has it, the Moto G, Moto X Play, LG G4... and by next month Samsung, HTC M8, LG G3, etc... should have it).