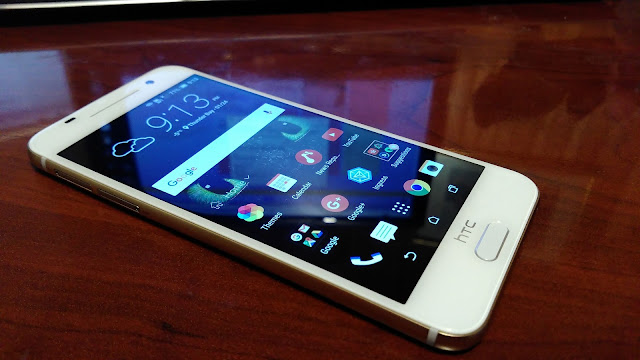 HTC is one of the oldest known names in the Android realm, and always holds a place dear to my heart.  Which is why I continue to enjoy their products as they come out; it is just unfortunate that they haven't really released a product that I could say is 'mine'.

This new A9 comes very close.

The HTC One A9 is a break from their One M* series, but I'm not how it stays within the 'One series' - maybe it's the ultrapixels that differentiates it.  I say that, because there's no dual speakers like the One M, it doesn't have that contoured back... it seems a real departure.

That being said, it's a smooth departure also away from any of the other designs they've had and it is one of the sleekest phones I've put my hands on in a while.

Let's give it a look-see 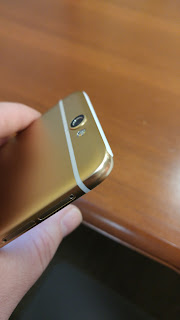 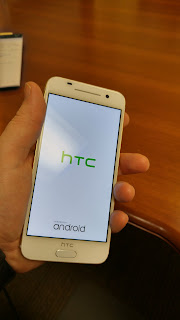 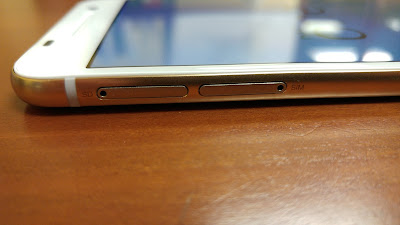 It is thin.  And smooth, and to me that could be a dangerous thing.  So I'd recommend you look into some sort of bumper case.  I don't mind thin phones, but couple it with smooth and it quickly becomes slippery.  I prefer my phones to have some ... 'heft'.

The next strike against it is that the power and volume controls are on the same side.  I get that it's because the SIM and SD are on the opposite, but it's just not the way I like to roll.  The power button does have a nice texture to it, similar to the ZTE Axon's. 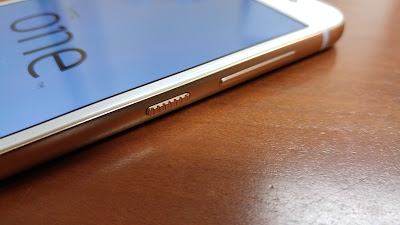 The fingerprint scanner sits there at the front of the unit asking to be pressed... but it's not a button.  The area's aside to it feel a little ... blank as you're expecting there to be a 'back' or a 'multi' button.  Maybe a bit of a missed opportunity to do something.  Because at 5" it's definitely taller than my Moto G.  Tall + thin + smooth makes for a tricky game.

But it's a nice feel overall... I can nitpick all I want, but in the end it does feel very nice to pick up and handle.

Now, we're starting to get real used to these, and as such it has to operate really well.  I was surprised how much it was able to recognize my fingerprint, even at an angle.  On the Samsung devices I have used I have had to add a same finger, but at a different orientation in order for it to work.  So kudos!

That being said, after coming from the Nexus 6P for using a fingerprint scanner, it is nowhere near as fast (watch the video).  It's still good, just not as snappy as I would have expected (the rest of the device is very snappy).

IT's HTC Sense, and there's not really a lot of difference from what I saw of this and the M9 version I reviewed a while back.  Which is kind of sad (obviously there's some updates, but the features are the same).

Blinkfeed is pretty neat and cool that it incorporates G+ into it.

There really wasn't anything 'wow'ing.  This was meant as their middle of the line phone.  And it does a great job at that.

Now, I don't know if it's a Marshmallow thing or not, but I don't get the swipe up feature for Google Now (I swear it was in the Nexus 6P).  You can hold home for the "Now on Tap" feature, and then you're given the option to then click the G for Google Now.  I just got so used to it (but I think that's the same for the Samsung devices right?)

I'm quite taken at how well it actually performs.  Unlike other OEMs who throw on their device it makes it quite sluggish.  I think HTC has really done a great job at making the UI perform ultra smoothly for the user.

Some apps do load a little slower, but hardly noticeable against even some of my other devices.  Anything with the Sense UI really blazes along.

Battery ... now with the 2150mAh battery, I'd be hard pressed to believe that it could last a day.  It just might.  It hasn't in my testing, but then again I test at pretty intense levels (3 Google accounts, a couple exchange, 100+ apps with social media, backing up to Dropbox, Google Photos, Copy, etc...) so it has a lot to do.

I noticed a decent drop in battery power while I used it... now if you're probably looking at the mid range phone, your needs are going to be significantly less than mine.

That being said, Doze, a feature of Android 6.0 (which I believe the A9 is the first non-Nexus to be released with Marshmallow in Canada) which allows it to go into an ultra low power mode when not used in a while.

I had left the phone alone from Friday after work, fully charged, until Sunday night and it had lost only about 30% of power.  And periodically I would hear it chime in with a notification (alongside my other devices).  So, I was quite impressed.

You can buy the A9 unlocked from HTC's site for $649.  It's not that out there for the realm of pricing as for a few upgrades (battery, megapixel, processing) you would be in the $800+ category.  So this is for those folks that want a decent phone but really don't need all the bells and whistles, but you know would be unsatisfied with the economy line up. 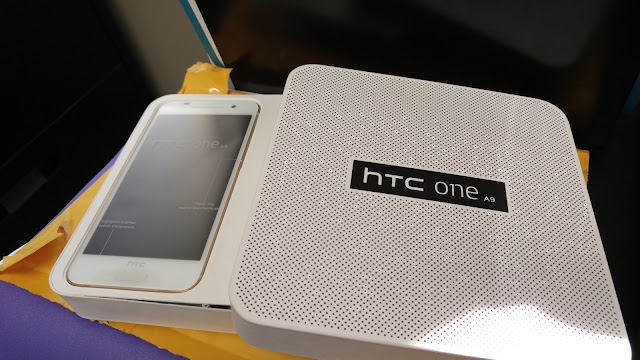 htc One A9 Review unlocked video