iRig Acoustic is a great idea - poorly executed for Android

Posted by Ryan Moore on January 11, 2016
Looking to replace a lot of what you have around your house these days with something that can do multiple things is just the norm of the modern home.

One of the trends we see these days is less usage of your 'computer' and using your phone or tablet for that.  I know we've really scaled back how often we go down to ol' compy and instead just use our phone.

Well, iRig has a bunch of accessories for your audio realm that you can use with your phone.  +Martin Guay has reviewed their Lav mic and is to be getting their studio mic soon as well for a review.

When it came to their acoustic guitar mic, I said I'd give it a try ... dust off the old axe and see what I can do with it. 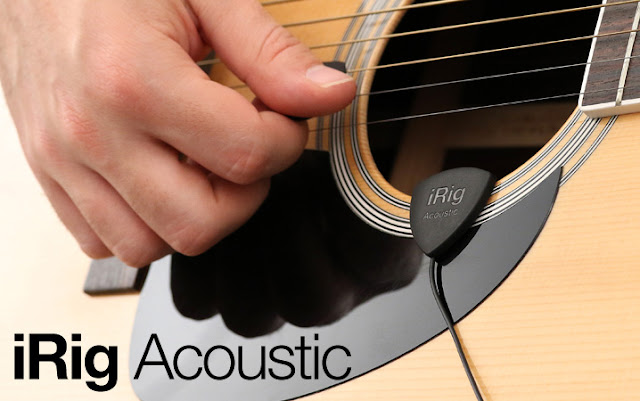 Reading their website can fill you with a bunch of hopes about what it can do. As a mic for your guitar, plugging it into your phone, it does that.  But not much beyond... unfortunately for us Android folks, at least.

So, basically you get the microphone, which then has a splitter on it to allow you to plug in your headphones at the same time as well as going into your phone. 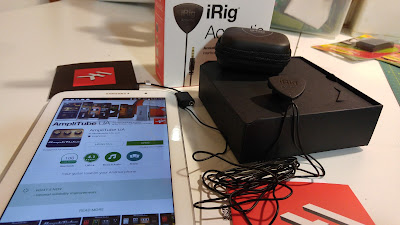 But, you'll have to use the app in order to also hear through the headphones at the same time, it's not a direct feed.  Which is okay... I guess.

The mic itself looks like a standard guitar pick up mic and clips onto your sound hole.  It was a little small and needed some 'stretching' to get on either of my guitars, and I was a little afraid, but it still stuck just fine. 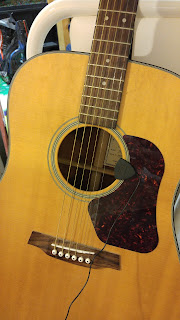 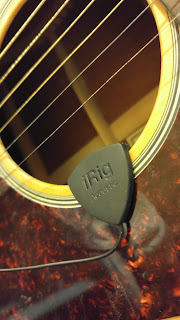 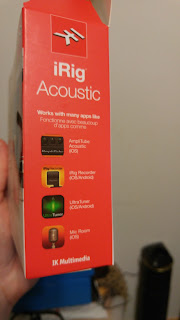 So, I wanted to rip into the box and get strumming.  Then I look on the box. After paying $50 for this microphone you find out that there's only one applicable app for Android.  Well 3 really... 1 is Ultra Tuner, a $13.32 app - for which there are several alternatives online for the same thing.  But maybe there's something special for iRig devices... I couldn't find it (there are some effects and small features... doubt I'd use them tho').

The other 2 are the microphone recording app... essentially what every device has already - an app to record sound.  There's a free version, and then a $10.67 version which has more features.

Let alone that to get any of their apps to work you have to make sure your mic's serial number is registered to your iRig account, and their sign in process is quite laborious.  Seriously.  I went downstairs to give it a review and over 30 minutes later I still hadn't even been able to get my guitar out as I was still registering and whatnot on the apps.

The real pain was that the AmpliTube app is not compatible with Android - which would let you 'fiddle with the dials' and make the guitar sound the way you wanted.  For Android, only the AmpliTube UA app is compatible, meaning tho' you have to get the iRig UA (another $80).

I gave the free microphone recording app a try... and with the app (which really is not as responsive as you'd expect in this day and age) you do get some minor settings, one of which is to 'monitor' what's being recorded; except that it's a few ms behind... so it's practically useless.

And... lo and behold, using the app it works just fine.

Except, at first I wanted to use my tablet ... and for some reason it would not work with my Note 8.  The sound was all choppy and just... horrid.  On the box it has an asterix which you have to look on the bottom of the box to see that it's only compatible with Samsung Professional Audio devices (which Android devices are those?) and low latency Android devices.  On my G4 it sounded fine.

Actually... no it doesn't.  Aside from the apps horrible usability (seriously, it's laggy and there's like 5 pop up screens to advertise their other apps / accessories / filters every time you open it) but after a while even on my G4 it started to sound 'clicky'.

I eventually switched over to just using LG's voice recording app.  Sure, now someone's going to tell me how the quality isn't the same.  And it is only a .3gp file, ..

So... essentially I just have a fancy mic for my guitar.  Let me play you 2 tracks and you tell me which is with the iRig and which uses the G4 mic.

To it's complement the iRig Acoustic mic does sound 'warmer' and more focused on the sound in the box than a mic that's picking up everything else (you really hear the twang on the phone mic).

So really there's not much to it if you're going to be an Android user.  You can't use it to plug it into anything else besides your phone.  The 'picture-only, no-text' manual was quite clear on that.

It's a real shame.  A good mic, just really crippled by the accompanying software and lack of support for Android