Posted by Ryan Moore on January 12, 2016
I don't know about you, but winter is starting to hit hard, and because of it I"m already starting to mentally imagine warmer times.  Like May Long weekend... ahhh.

And what better way to kick off the May Long weekend than heading to La Belle Provence for DroidCon. 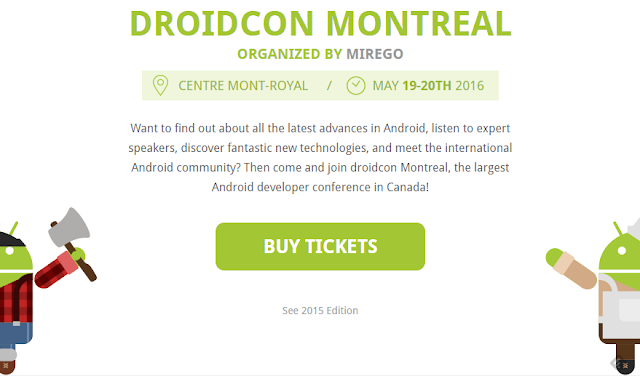 And, DroidCon also released some information today on their line up speakers, including one of their Keynote speakers: Dave Smith (from NewCircle).

I'm asking my boss for the time off today... maybe +Mike Wallace will let me crash on his couch.

Also, you can use code:  ANDROID-COLISEUM and you can save 20% off of the early bird pricing (right now, early bird runs until March 12, meaning it's only $263.33 for the 2 day event WITH your meals for those days, so save an extra $52 with our code!

See the media announcement below as well as some information on Dave Smith and his talk:

The whole droidcon Montréal team is very happy to announce the first speakers for the 2016 edition. This year, we're having 2 keynote talks- one for each day and we're excited to confirm that Dave Smith from NewCircle will be doing one of them! Dave Smith is a Google Developer Expert as well as an Android Lead at NewCircle. He will share about his career path and on how to become an Android Developer Expert. We're also thrilled to have once again Jesse Wilson and Jake Wharton from Square attending who are back with new talks.

Organized by Android developers for Android developers, the conference droidcon Montréal 2016 will attract over 50 programming guest speakers from illustrious tech companies around the world. During the 2-day event, experts will be sharing their skills and forecasting trends for the Android operating system with the event participants.