Posted by Ryan Moore on January 07, 2016
Okay, I have an old car... and since my CD got jammed in there I've only been able to listen to CBC radio.  Which is fine by me.  But, with the Google Play Music All Access, I have so much more stuff to listen to, but can only listen to it on my phone (or desktop, etc...).

So, for a while I've been looking for a good 'something' to get my music onto my car deck.  Unfortunately the car doesn't have a spare line in, so that was out... my only option was an FM transmitter.  I've not had a lot of luck with them, because, as always the limiting factor was FM was a pretty poor way to transmit information and sound was lossed.

A few days ago I got the Mpow Streambot Y, and it looks funky. 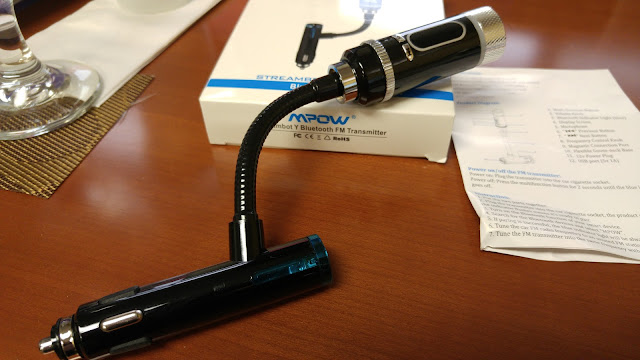 Unfortunately, the sound issue is still there.  You just can't overcome that with FM.  But it's not so bad... just not as good as a direct line or Bluetooth stream.

What I really liked about this was the neat design.  The rigid 'stem' allows the transmitter to stand up and not something that dangles or will sit in my cup holder.

It also comes in 2 parts.  The main power part that you plug in to the CLA (which also has a USB charging port, should you want it) and the stem for the transmitter. 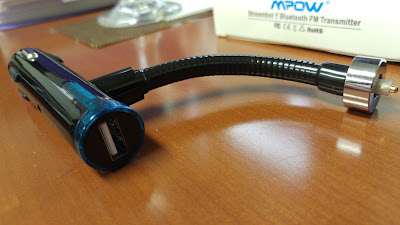 The second portion connects in via magnets to the 'stem'. 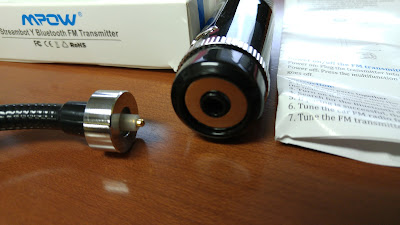 This portion has all the dials and knobs and display. 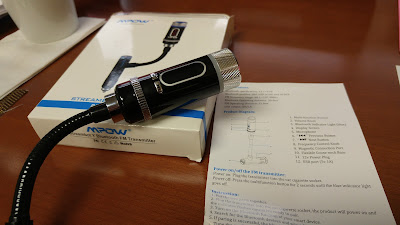 There's a ring closest to the stem that you use to adjust which FM station you want to transmit on.  I tried a bunch and what's nice to see is that it is about the same power at the top end of the dial as the bottom (some cheaper ones usually lose power the higher the frequency for some reason).  So just find a spot where there's no other station to transmit on.

There's some previous/skip buttons next to the display and then the end ring which you use to adjust the volume.  I had to keep it at max.  The end of the unit is a big multifunction button which you use for 'play/pause' / 'answer/end' etc...

Yup, you can also use it for phone calls.  My son definitely loved that.  The mic is located on the unit so it picks up the car pretty well and does a decent job of isolating out the sound over the speakers.

It's also a nice glowing blue - so it's easy to see the button.

So, my concerns were the sound... which I knew going in.  But when it came in 2 parts I had a fear that it would too easily fall apart while driving around.  So wrong.  The magnet holds really well.  Trying to pull it off will pull the whole unit out of the port before it separates.

The down side (for me) is that my power outlet is an 'always on' one, meaning when I turn off the key the power still flows to that outlet meaning that the light would stay on the transmitter (and my phone will still stay connected via bluetooth until I'm out of range).  So it's nice that I can just separate the end piece (use 2 hands), essentially killing the BT connection and not having some glowing light on in your car.

For me, this is as good as it'll get to stream music in my car (until I purchase a new car...).  If you need a solution in your vehicle, I'd definitely recommend this over any others I've seen.  It's definitely cheaper than other options I've seen in stores and looks better.

The feel is a little on the 'cheap' side.  Like the prev/skip buttons feel a little plasticy, but I'm sure it'll hold out longer than I'll need it for.

My dream suggestion for the company would be that if only they could merge this with something like the "Nomad RoadTrip" where the end piece has a portable battery charger in it.  That'd be awesome.