Android's "Who's using What version" has been released

Posted by Ryan Moore on December 09, 2015
So, the common sticking point of any iOS user to an Android user is "yeah, well, I'm on the latest version".  Which could be very well true.  So who is using which version? 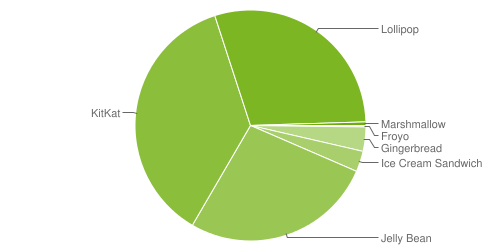 Data collected during a 7-day period ending on December 7, 2015.
Any versions with less than 0.1% distribution are not shown.

Essentially, there's still a lot of people using KitKat (which is a wholly stable build for the most part and with the right Google Play Services has most of the features you'll need).  But KK is now almost 2 years old.  Marshmallow just came out only recently, and there really hasn't been a rush to get a hold of the new Nexus devices and only some of the recent ones are compatible.  So there'll be a slow trickle into that version.

But Lollipop is still growing strong.

You can go and view the historical data on this by visiting our database page.

What version are you on?