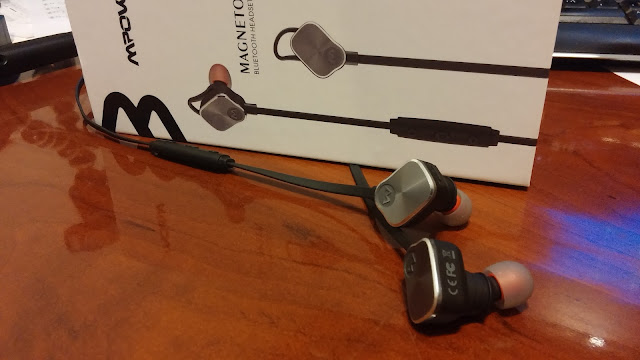 So lately I've taken up running... but I'll let you in on a secret - running is boring.  So you'll need to find something to keep your mind off of how boring it is, and what kinda damage you're doing to your knees and shins etc... (yes, I know, I'm being a little sarcastic)

I use music while I run... and there's some folks out there that will tell you what kind of music to listen to while you run... but I just like having any music going.

Having standard headphones with a cable sucks, so look for wireless options.  I normally have my over the ear type but when I jog it's really hard to keep them stationary.  So this Magneto model for $43 looks really good for the task. 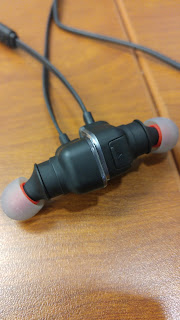 They're called the 'Magneto' headphones because the 2 earbuds have magnets (they normally have magnets, but these are extra) as they then can clip together.  More on that later.

The set charges via microUSB.  It'll take about 2 hours to charge, and it'll give you 8 hours of playing time (they also claim there'll be about 300 hours of standby time).  I haven't run into any issue with the battery life as of yet.

You do get your battery indicator in your phone once you've got it paired.

To pair it up you'll hold the middle button when it's off for about 7 seconds (it'll power up but just keep holding it a little longer puts it into pairing mode).

The middle button then also serves as play or pause (or answer or hang up).  The top button is vol+, and bottom is obviously vol-.  In an odd twist to skip the track you long hold the vol- button (and v.v long press vol+ to prev).  Just seems a little backwards to me.

The fact that it's just earbuds means that they have to put some of the electronics somewhere so it makes the buds a fair bit bulky. 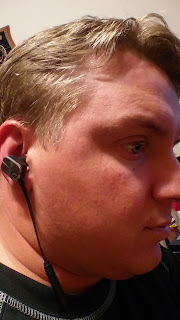 Now ... how does it actually work?

Well... it's not the best sound.  Away from the ear it's barely audible.  Which doesn't help if I'm trying to use them as my phone earpiece and I have them just dangling around my neck.

Then it seems to be a crapshoot sometimes about how it would work ... it would always connect and pair up no problem; but hit the play button and about half the time nothing would happen (of course it works perfectly for the video tho').  Sometimes the app would load and music would play... or at least I could see the time track along, but nothing would come over the earbuds.

Sometimes playing with a skip button might get it to start working.

Talking with MPOW they have said that it was designed with the iPhone in mind so it would work better on that apparently.  I'm wondering if it has something to do with the Bluetooth 4.1.

They said they're going to look into it and hopefully make some improvements going forward.

Just a shame that it didn't work as simply as other bluetooth sets out there (i tried it with all my phones and got the same type of results).  When it did work it was good.  Tho' now and again it would have some stuttering (on my Idol 3 it sounded like a bad radio connection).

Hopefully if you try it out yours works out better than mine.