Posted by Ryan Moore on November 18, 2015
So, we've reviewed a lot of bluetooth headphones lately.  Especially as I look for the right one to take with me jogging and then this headpiece comes to me and my immediate thought is "who still uses earpieces?". 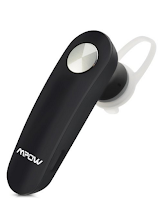 I do have one in the car for the odd time I'll make a phone call, but really that tech hasn't changed all that much in the past ... decade; with the exception of this one.  The Mpow Easytalk

Luckily, they include a hard plastic 'hook' to help ... that's what I'm used to when it comes to using these types of earpieces. 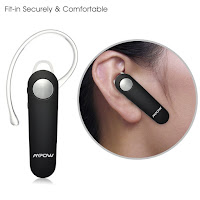 Now, where most earpieces are used, it ends here, and it does a good job of being just that.  Connects simply, makes and receives calls simply and charges via microUSB (they say it's about 4-5 hours of use before recharging is required, but I hardly used it that long).

What makes it go above and beyond most others there is that in the box they've included an extra little headphone... a simple single earpiece that has a microUSB jack on the other end.

This will allow you to plug in the earbud into the port and then sling it around the back of your neck (or under your chin too, I guess).

This allows you now to have stereo music play through the piece and not just phone calls (because, come on - how many of you make phone calls anymore?).  Unfortunately the extra earbud is pretty flimsy and cheap feeling.  As such the sound quality isn't anywhere near what a good headphone would be (for voice it's just fine).