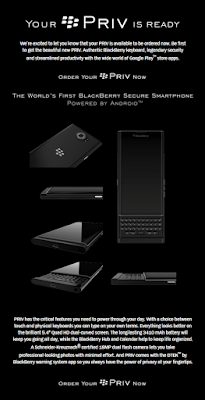 The BlackBerry PRIV is now up for pre-order!

Looking to purchase it, well you can pre-order it on BlackBerry's site for $899CDN.

Ouch, that's a little steep... however, this is something that several folks I know of, and potentially a lot more, have been asking for.  And BlackBerry has a reputation for a top end hardware, and now it's got top end software.

Order it today and it starts shipping November 6.

That's definitely doing it right as it will be there well before Christmas, meaning they should have stock in the stores for that season.

Here's what the phone comes with:


Now, it has NFC... does that mean BlackBerry will potentially use Android Pay or will there be BlackBerry Pay coming soon?