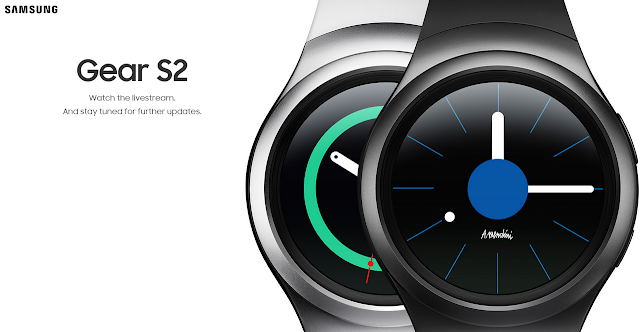 This is a few days old, but better late than never.

For those of us who are enjoying our smartwatches (my son just earned my old Sony SW1 for learning to tie his shoes and he's prouder than anything) there's quite a lot of choice these days in our choice for smarter wrist wear.

Samsung was really one of the early manufacturers in this field with their first Gear 1 (you remember, it had a camera).  Then there was the Gear S, which Cass really loved.  Well, they've recently announced (not released yet) the Gear S2/

So, this is the foray of Samsung into the round.  Interesting.

It'll be a 1.2" circular 360x360 (heh, get it ... round... 360 degrees).  Like previous models it'll have NFC built in for easy pairing (and potentially Samsung Pay?).  Similarly it'll also be Tizen based, so no Wear apps.  But that won't limit its functionality as it will still pack in a bunch of features.

It'll have 512MB RAM with 4GB storage.  It's 250mAh battery is claiming to last about 2-3 days.  It'll also be IP68 to ensure that you won't have to baby it when you walk outside in the rain or accidentally forget to take it off before a swim.

Just have to wait to hear about availability and cost.

Looks very stylish.  What do you think?