I loved when the Chromecast came out... being able to easily throw what my phone had on screen on to the TV opened up a whole realm of possibilities.  Being able to use your TV as more of an internet device was awesome.

Sure, I've had a Google TV for a long time, but I really only ever used it for Netflix and Youtube... I didn't know it then, but I was dipping my toes in and getting ready myself ready for this whole "appification" of the TV world.

Just as slowly but surely I've watched folks use their computers, and then switch to laptops and then switching to tablets and phones.  Making things simple... more focused.

So, I got this chance to review Insignia's Roku TV and I really can't believe I've missed out on this whole device.  There's Roku TV boxes and Roku sticks... I hadn't given them a shot.  Boy, did I miss out.
Okay, before I get really into the article, I'm sure you're asking "but why is this an Android related topic?"  Well, Roku isn't limited to just it's own platform and remote control... you can get a Roku app for your phone and essentially then control your whole TV from your phone.  But more on that later.

Okay, back to the Roku set up.

Turning on the TV you immediately get it to connect it to the Wifi and you can connect it to your Roku account.  If you don't have a Roku account, like I didn't, it doesn't make too much of a difference that way.  The set up also asked what items were connected to what connections and it sets those up as your first 'apps' on the device.

Defaultly on the homescreen there's Netflix, Youtube, etc... this is where if you don't have a Roku account you don't have to worry as you can still sign into Netflix etc...

I asked my wife what she liked about the TV, here's what she said:

"I like the Netflix button, it makes things easier." 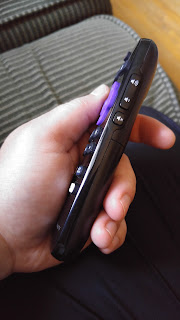 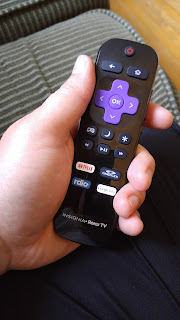 I strongly believe that simplifying the remote is the making of a smart TV.

What's even cooler is that when you turn off the TV you can just use that button to automatically turn the TV on and bring it straight into Netflix (or rdio or...)

I still had to install Cineplex and rdio.

To install these apps you can search from the homescreen for 'streaming channels'.  Roku has about 1400 channels (including some Kung Fu channels or Cat ones...) - and then there's apparently some unofficial ones you can still add (think "sideloading").

What's neat ... and I'll go back to the appification theory is how really the central theme of this is that it's all apps.  It's like a big phone.  Turn the TV on and you start with the homescreen, not into a channel on your cable box.  You have to choose one of those apps to bring it up.

You navigate through your apps and channels with the remote, in a similar fashion as you would on a device (just without a touch interface). 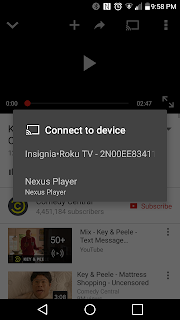 You could also cast to it just like it was a Chromecast.
I don't know how the stick or box work, but for me this is the perfectly ideal scenario; everything goes through the Roku system (what I really liked about the Google TV box - the cable feeds through the box).

The model I got to review was the 55" version and it was a little large for my front room, but I liked it.


I'm trying to stay away from talking about the TV specs... as it would be a little far afield from the Android site, but it would be really hard for me to talk about a TV and applaud it for some really cool features and then you buy and not like the picture.

You shouldn't worry.  It's no UHD set, it's 1080p @ 60Hz (which is pretty much matching what the cables providers are able to give us) and the colours aren't spectacular, but to be honest these days you really are splitting hairs over the difference in the sets these days.  For what we watched, and what cable was putting out, it was more than adequate.

The only thing I can probably nitpick about was the fact that the set only has 3 HDMI connections. 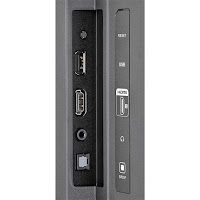 Oh, another thing I can nitpick about on Roku is playing USB media.  There is a spot for you to plug a stick in... however playing things from it isn't as straight forward.  It took some digging on how to add the Roku Player app to the homescreen so you can browse through it.  Once you find it, you're also going to notice that you can't play AVI files.

Now let's talk about the app that you can use on your phone. Download the app and then you're asked to look for Roku sets on the same Wifi and then you can use your phone just as you would the remote for the TV and add any Roku channels etc... to it. You can view your channels on the device, reorder, or remove.

And yes, it's in that horrid Purple on Black... I think it's a branding thing.

Why you'd use it is because you can now control the device with your phone, meaning if you want to search for something you can use an onscreen keyboard instead of having to spell on the TV one letter at a time; but most importantly it works without having to point a remote AT the TV since it uses the network. IR is becoming quickly a pain in the ass.

As I talk to more and more people, the fact that they've also cut cable and have focused more on using Netflix or other streaming services.  There are plenty of items that are out there to help you do it, but often people overlook the simplest piece to use - putting the streaming service right at the head - in the TV.

If you're looking to cut back on cable I'd really suggest looking at this set.  The 55" version runs about $800 but often have seen it on sale for about $600 (there's a couple of other models and some made by Sharp and they're all Best Buy Exclusives).  Maybe it's been a long time since I've bought a TV, but that seems pretty cheap (I won't tell you how much my 43" projection TV cost all those years ago).

So there you have it... a really smart Smart TV.  Most other Smart TVs out there you find usually have the apps as an aside... something thrown in as an afterthought.

Similar to the early days of cellphones that started to try to have other things, like games on them. Primarily it's a phone ... that can play games, or take pictures. Nowadays being a phone is just one feature of the device.

Whereas this partnership of Roku and Insignia it's where they started ... really taking into account really what people are using their TVs for primarily.  And then you can control the whole thing with a simple app on your phone.

Oh what an age we live in.
Insignia Review Roku smart tv tv