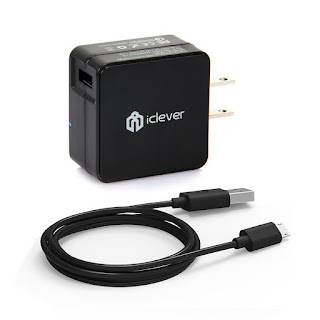 Rapid Charge is all the rage lately, it's almost a given that a flagship will have some sort of quick charging technology - they come by many different names; Rapid Charge, Quick Charge, Turbo Charge, etc... Android Police did a good run down of the different types of technology out there and I'd recommend it as a good read if you wanted an overview.

So if your phone didn't come with one (looking at you Moto X Play) you will need to go out and get one.  But they can be expensive if you get the OEM.  So, here's a very affordable option for just under $20 from iClever 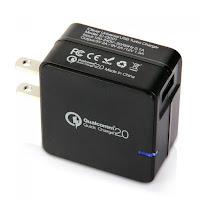 The G4 has never really been officially supported for Quick Charge, but I think it worked for me as I plugged it in and used the cable it came with (I found if I used an older cable I wouldn't get near the speeds).

The test I ran on my phone was to have the charger plugged in and then use the phone at the same time and here's the change:

30 minutes of using it fully while plugged in I gained 10%.  Not fast if you think about it in numbers, but remember... I had the screen on, using Wifi, some Youtube etc...

10 minutes of leaving the screen off I jumped about 15%.  That is definitely more impressive.  That would be a full charge in about an hour.

Now, keep in mind, by nature Rapid Charge works best on a lower batter than on a fuller battery, so the speeds do slow as you get near the top end.

And what was weirder was that it is supposed to light up blue when it's normally charging, and then green when it's on Rapid Charge - but I never got 'rapid charge' (again, the G4 was never really set up, but I felt like I got better speeds than my normal 5V, 2A charger).

I still wish these things came with a longer cable as they tend to be a little short for me (plugging it in the socket near the floor makes it a little hard to reach my hand on the couch).

Finding a decent charger is a very important thing for our phones... and well, this is one I think you'd be happy with in your set up!