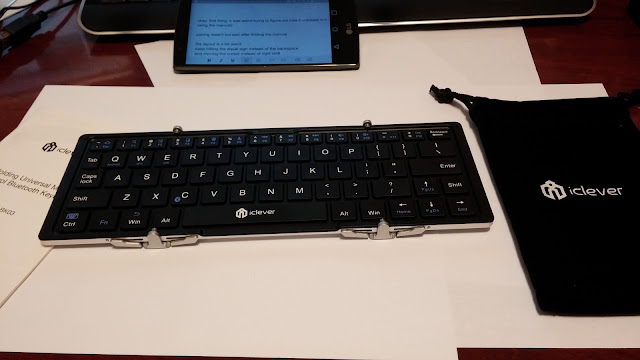 There's something about being truly mobile.  +Martin Guay's recent articles can attest to that (part 1, 2, & 3).

For me my real turning point from hobbyist into full on geek for mobile came with my Palm Pilot and when I got their foldable keyboard I just loved watching people turn around for the 'wha' reaction.  It was priceless.  I did a lot of work on that keyboard.  Lesson plans for school, research papers while at work, etc... it wasn't as good as a computer, but Palm had its limitations.

So, when iClever sent over their version of the same, I actually 'squee'd.

So, it says it's a 'trifold', but I really don't consider it 'trifold' unless all three pieces are the same.  In this case there's 2 end pieces that flip over and meet over a bigger middle piece.  The hinge looks like it's loose when it's folded up, but I spent the better part of one weekend day just flipping it out and back (my phone wasn't liking that because doing that turns on and off the bluetooth).

So, yes, to pair it up it's quite easy.  Unfolding it turns it on automatically (no having to finagle some power switch or forget to turn it off); it's on when you want, and off when you don't.  Fantastic!

With it on, to pair your device (and I had to look this up, geek card revoked) you use Fn+C and hold for a few seconds for the blue light to blink.  Then go on to your device, find it, pair it, you're done.  From now on it'll automatically start connecting to the device when unfolded.

It charges via microUSB, and according to the site it should last about 84 hours.  That's a long time.  I didn't put it through quite so long a test.

What I did find when I did use it was it worked nicely.  Connecting was a breeze (although when you actually type the virtual keyboard still pops up... I think there's a way to disable that, but I forget).

There were a few minor points that I did struggle with, however.

One: the layout is just ever so slightly different than I'm used to, the backspace is tiny, therefore I keep hitting the equal sign instead of the actual backspace (I need to learn to move my pinky finger over more)

Two: the right shift is smaller, thus I keep hitting the cursor up instead (again; I need to learn to move my pinky finger just a little more)

Three: Copy/Paste/Cut work as normal with CTRL+C etc... but there's Fn buttons for them as well and Past just looks weird.  Stick to the shortcuts you know, I guess. 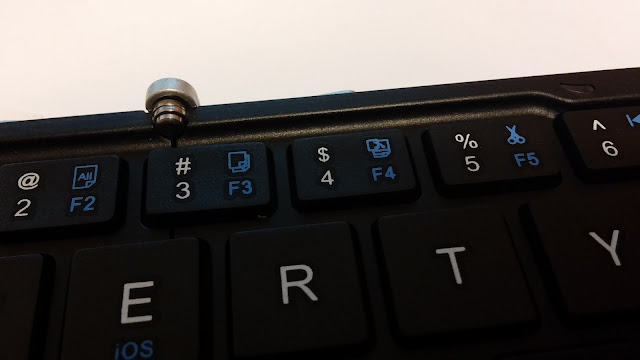 Four: the multitask / overview feature is a little ... wonky.  I guess it's not as intuitive to use.  Use the ALT+Tab to enter into the overview, but hold ALT down while you use the up/down arrows to pick your app, let go of ALT to go to that app.


Like I said, nothing insurmountable, and it's just something that you have to get used to... not every keyboard is the same and eventually you adapt.

Overall... it's awesome.  For $40CDN it does exactly what you want it to, it is only slightly larger than your phone 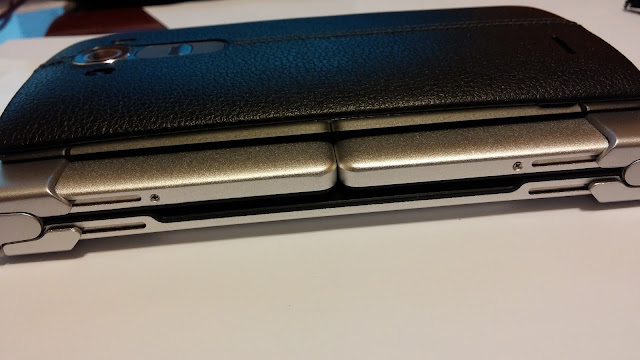 and it comes with a snazzy carrying pouch.

If you want a bluetooth keyboard to take with you on the go... this is it.  Otherwise, get a laptop.