8bitdo has just made the cutest gamepad for your device

If you remember a while back, we had reviewed the NES30 (Ryan and Sylvain) and it was really cool to see their homage to the Nintendo era.

They released a second version (the PRO) and a few others as well, but haven't stopped there as they've now released the Zero.  Which is absolutely adorable. 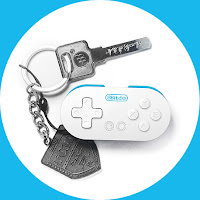 Running at just $15USD (via eBay or Willgoo) it's small enough for your keychain.

This is pretty awesome.  And my son has been bugging me to pick up a new gamepad seeing as Minecraft now supports controllers (tho' it doesn't have the analog sticks... so he'll probably getting my gamepad and this will be mine).

But it's so cute!