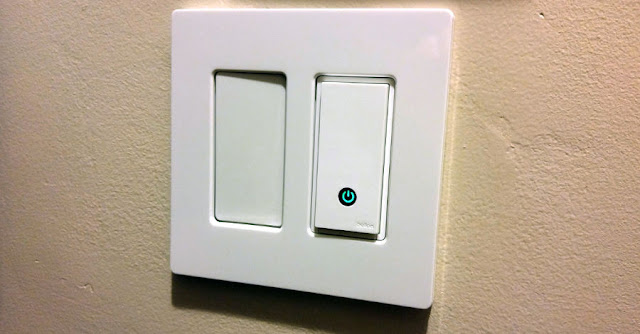 I've always been interested in home automation, and just recently, I finally went for it and picked up a WeMo Light Switch from Walmart. (This same product can be had at Best Buy, and Home Depot too.)

It didn't take long after the install before I realized this was not just a gimmick, but very functional and practical for me. 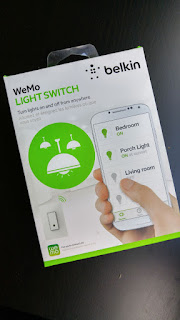 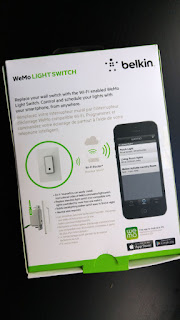 I setup the WeMo Light Switch for my front door. The existing switch would switch on both the light inside the home by the door, and the outside light. When we leave the outside light on for when we arrive home later, we end up with a ton of insects drawn to the light, and therefore they all end up coming into my home with us. Gross and annoying.

Now, we can leave the light off, and from either my phone (Android) or my wife's phone (iPhone) we can remotely turn on the light just as we pull into our driveway, or as we walk up the sidewalk and approach the door.

The switch itself is still a button, so you can press it and it'll work like a regular light switch - no smartphone or tablet required then. WeMo/Belkin also added the ability to press and hold the light switch to trigger another setting of your choosing. In my case, using IFTTT, if I long press my WeMo Light Switch, it will turn on two of the WeMo LED lights in my living room. (More on the LED lights later.)

Installation was easy - for me. I've plenty of experience with home repair over the years and switching out an electrical outlet or a light switch is a walk in the park for me. The only catch with the WeMo Light Switch is you do require the white wire - something not always present in the light switch box. This white wire is used to power the WeMo Light Switch, seeing that it has an internal switch, Wi-Fi, and some LED lights (showing connections, power, etc.)

The tricky part came along when it came down to syncing it up to the WeMo app. You need to do the following;

- Switch your smartphone to the WeMo's own WiFi network for setup
- Open the WeMo app. If the WeMo app was already open, it either will not work, or it crashes. So make sure you WeMo is completely closed (not just minimized)
- Follow the instructions from the app.
- Wait. It may crash. If so, start over

Eventually, it will work, and once you're connected, the app has been working just fine for me.

Next up, I was gifted by lovely wife the WeMo LED Lighting Starter Set, plus a couple of WeMo Smart LED Bulbs. It was my anniversary present - I'm spoiled! 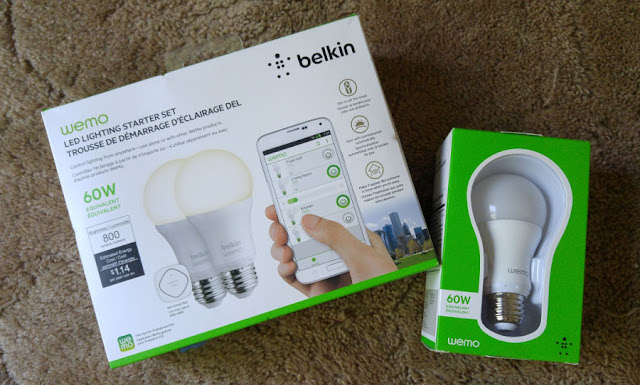 Since the WeMo app was already setup with the WeMo Light Switch, adding the controller and LED bulbs was easier - but not trouble free.

Once again, when I went to add more products in the app, the app crashed on me a couple of times. I was prompt in sending in crash reports.

After a successful attempt at adding the lights, they all showed up as Light 1, Light 2, and so on in the app. The app does allow you to rename each WeMo device to help you know which is which. You can also pair the lights together incase you want to control more than one at once. It's as easy as a drag-and-drop.

The LED bulbs are bright! As shown on the box, these are the equivalent as a 60W bulb. Colour me impressed. I still remember LED lights coming to the market on Christmas trees, but those lights would just glow and not really provide any light to the room. That has certainly changed now!

These LED bulbs also dim, which is very nice, especially the ones I have setup in the living room. It adds to the ambiance when watching TV, and reduces glare off the screen for me.

If you're hoping these are like the Philips Hue lights, sorry, these do not change colours.

Verdict? The WeMo products appear to be very good quality! Everything looks nice, doesn't appear to have cheap parts, and they're doing the job as intended! The app, however, looks dated, and crashes when setting up products. This applies to both the Android app, and the iOS version. Both are identical to each other by the way. I assumed Belkin had just ported over the iOS version.

Keep an eye for a future article where I talk about controlling the WeMo devices with Tasker, AutoVoice, and IFTTT!
home automation iOS wemo