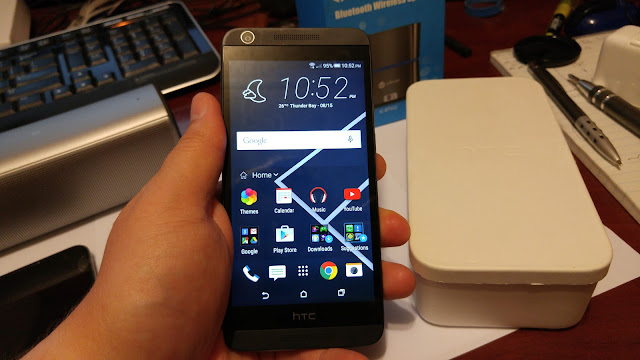 So, we've seen a lot of 'affordable' phones as of late.  We've reviewed several lately, the Moto G, the Alcatel Idol 3, and I'll have my review of the ZTE Grand X2 up shortly.

The affordable range has really heated up, and I think that folks like Moto are really leading the charge.  Many people are realizing they don't have to have a top end phone, but also with the specs you're not sacrificing a whole heck of a lot.

This is great as more and more folks are adopting smartphones; older relatives, or those kids that are starting school but the parents don't want to give them a distraction device.

I think this Desire 626s really can fit in the latter category.  This is a device that can handle all your 'need to get things done' apps and still perform alright for some of the 'distraction' apps.

So, let's move our hands over this device and see what we find.  First off it looks like a plastic version of their One series... but it knows it can't replicate it and it does well differentiating. There's the rubber ring for the midframe, which really helps you hold on to the device, and then you're also struck by how thin it is.  No awkward rounded back (funny, how I didn't like it on the M9, but it's tolerable on my G4).

The back is non-removable (well, it's not meant to be done by the average consumer, but you could pop it off fairly easily... nothing to see tho') and is made of a plastic.  What's nice in my mind is that it's easily looks like plastic, so you know it's not trying to 'look like' a premium build (like the Galaxy S3 or S4 that were plastic but tried to fool you into thinking it might be metal).

Untypical of HTC the power button is on the right side, but oddly it's below the volume keys.  Even odder... I think it's almost placed perfectly.

There's the microSD / SIM port on the left side which pops out, but be warned... that SIM tray is really flimsy plastic and it's pretty hard to get it to go back in properly... I always felt like it would bend and snap easily.  Just takes some coercing.

You also have the stylized HTC speakers, top and bottom, but unfortunately one's just the ear piece, so you're not getting true stereo.

Before we dive into what it looks like turned on; what does it have for specs?

Let's turn it on, and now we'll see Sense 7; nothing we haven't seen before on the M9 review.  Being on Android 5.1 they follow the proper way to swipe down the notification shade (looking at you here LG... take note) where one pull down brings up just the notifications, the second all your power toggles. 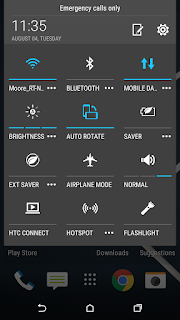 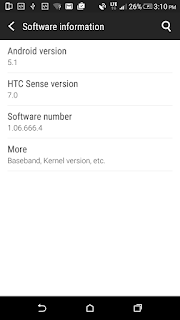 It's nice to have Blinkfeed, and a little customized icon set for whether you're at work or home or out.  I'm not a fan personally, but I can see the appeal.

What's nice is you can really customize what you put in there.

What is pretty nice is I like having the weather implemented in the calendar.  That's pretty cool and handy.

The camera... well it's not exactly superb... as I said, try to think back a few generations for quality.  But that's not why you bought this guy anyways.

The layout for the camera looks pretty much the same across the board for other HTC devices.  Nothing surprising here really

I've put some samples on here, but I doubt they'll come through at full res, so I've made a link to a Google Photos Album:  https://goo.gl/photos/d555SVkTX9WY78UCA 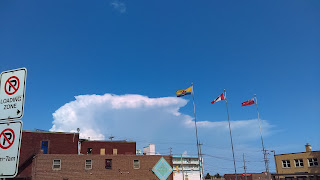 Now, performance wise, the 720p screen does help the tiny battery (well, smaller than I'm used to) to good use and seems to last a good amount of time.

Putting it through some apps and things like email, browsing, G+, facebook etc... all load up and operate normally (if somewhat a little slow to start or switch between apps).  Funnily enough my data plan had run out on me so I started to use the HTC for my Ingress needs for the day and I gotta tell you, it was SLOW.  Like painfully slow.  Almost wanted to throw it out slow.

Run another game off something from Humble Bundle and it works just fine, albeit a little slower to load up than I'm used to, but it still hums along the game normally.  Sure, not blazing fast, but this is a few years older tech I'm working with, so I'm impressed.  Back to Ingress and it's still painfully slow.  Not sure the discrepancy there, I've never noticed that in any other test phone I've done.

Overall - this is a phone I wouldn't think I was subjecting anyone to using it ... like if I gave it to my son for him to take to school, I'd know that it would operate for what he needed it to, but wouldn't be out any major processing power.  Definitely something I would consider if this were my first foray into the phone realm; or were I really price conscious as it's in that $200 range.  Stacking it up to some of the competition, I would probably have priced it a little below that; but that's just me.

Available currently at Bell, Videotron and Wind it can also be free on a plan.
Desire 626s htc Phone Review video