Posted by Ryan Moore on July 29, 2015
So for a while now, many of the Android Enthusiasts have asked manufacturers to stop tinkering with the base of Android, and provide Stock.  They like their Android like the Nexus.  Sure, they could add extra features as separate apps, but the look and feel of the UI should be as nature Google intended.

There was some options if you were in the US, where you could get "Google Play Editions" of some of the flagships, but that's not been renewed in a while.

Yesterday, there was even a lot of people loving the fact how the new Moto is 'near stock'.  OnePlus touted how OxyOS is close to AOSP as wel. 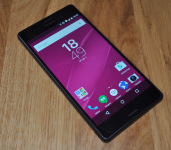 For those of you who have used Sony's Xperia UI... some love it, some not so much.  I know when I've reviewed them I heavily recommended changing launchers (+Martin Guay has some great examples on his Z2 to show you).

Well, it looks like you can ditch their UI with their new 'Concept for Android', which is their theme to make it look like a Nexus; and it's now available for download at XDA

user91 (the guy who provided it) says:

“By the way, the ROM itself is absolutely nothing to excited about. Take any stock Sony Lollipop ROM, take away all the reasons for buying this phone (no double tap to wake, low brightness, no display enhancements, no sound enhancements) – well the camera works, and that’s it.”