Posted by Ryan Moore on July 17, 2015
So, let's do the recap... a few years back a little game from a little Finnish company came along and took the mobile world by storm.

What was a simple game about flinging mad birds at bad pigs launched itself into a huge maelstrom of activity, spawning these games

And that's 11 games of just the birds (I'm sure I'm missing some).  Then there's the spin off of the Bad Piggies game and then Stella (the pink bird) got 2 games of her own (slingshot and Pop).  All the while they integrated Telepods in a "Skylander-esque" manner to help with real world purchases (aside from all the other merchandise they made).

But it's slowed down popularity wise, and they've had some issues; with even the original founder having given up the seat last year stating the had taken it as far as he could (and the company had some falling profits).

Hoping to continue to build on the brand, they're bringing in Angry Birds 2 on July 30th 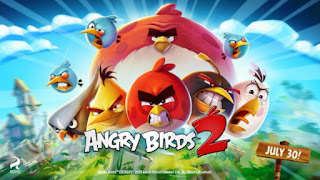