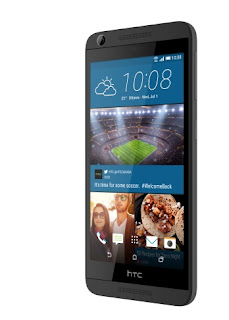 It really has become quite the popular space ... it's not the flagship which the prices are just rising along with the specs, but it's not the economy, bottom of the barrel, just a slight step up from a flip phone .. it's the mid range line up.

There's the S* mini lineup, LG's Beat, Sony's 'compact'; and yesterday HTC announced the Desire 626s, which will be coming to Bell, Virgin, Wind and Videotron soon (pricing has yet to be announced by the carriers)

So, it's been outed in the US going for around $169USD, which is a pretty decent price.  What do you get for that price?


HTC is saying that you shouldn't have to 'sacrifice' or 'settle' when looking for an affordable phone.  This is looking to be a good alternative.

Toronto, ON – July 15, 2015 – HTC, a leader in mobile innovation, announces the release of the new HTC Desire 626s, – designed to make premium smartphone experiences affordable and accessible to all. HTC brings many of the same features found in its flagship HTC One® M9 to a premium and modern design that will withstand the test of time.

“At HTC, we don’t think you should have to sacrifice or settle if you are looking for an affordable smartphone. That is why we are bringing the absolute best affordable smartphone to market with the HTC Desire,” said Jason Mackenzie, president of HTC America. “Our Desire 626s smartphone brings the premium experiences, performance and style of our flagship smartphone at an incredible price.”

Personal style isn’t only on the surface. With HTC Sense® 7, the new HTC Desire 626s smartphone can be customized with HTC Themes, HTC BlinkFeed® and HTC Sense Home applications.

HTC Themes pull colour and textural elements from a favourite photo to modify the look of apps, colour scheme and home screen. HTC Themes also provides an opportunity to create and share a theme with the HTC community, or just browse and download one created by other HTC users.

The HTC Sense Home is an intelligent widget that automatically curates apps based on usage and location. It is contextually aware of location, time of day and preferred apps at home, work or on the go. While exploring a new city, HTC BlinkFeed intelligently recommends restaurants near you and recommended by friends during mealtimes.

With LTE capability and a quad-core processor, the HTC Desire 626s, offers speedy uploads and downloads while keeping up with multitasking between apps. A 2000 mAh battery and expandable memory further enhance the power of the new HTC Desire 626s.

A better way to relive favourite memories
The HTC Desire 626s’ 5-inch, HD 720 pixel screen beautifully displays photos, video and multimedia content with an immersive smartphone experience. HTC One Gallery syncs with Facebook, Flickr, Google Drive and Dropbox accounts and brings photos together in a single location to make finding, searching and viewing easier than ever.

Zoe®, a signature HTC app that comes preloaded, makes it especially easy to share visual stories of experiences with friends and family in a more dynamic way.  Zoe Highlights combine favourite photos and video with music to bring the experience to life. The HTC Desire 626s comes with an 8MP primary camera, a 2-megapixel front-facing camera and video captured by HD 720p video recording capabilities.

Availability
In Canada, the HTC Desire 626s will be available in grey on Bell, Videotron, Virgin Mobile and WIND Mobile. Carriers will announce pricing and availability in the coming weeks.