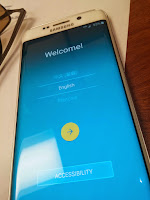 So, Samsung has released their latest flagship device, and in traditional fashion they've released a variant ... but there's a reason.  With the Note 4, and the Note Edge they had to come up with an Edge of the S6.

Typically the Edge variant will cost you about $100 more than the standard S6 ... and it just looks cool.  To anybody that asked in the past while I would have said - "get the Edge, pay the difference".  It looks sexy.  It really does.  However, after using it these past couple of weeks, I have to just say that's about it for the 'feature'.

...But more on that later.  Here's my quick summation


(fuller video down below)
Let's have a quick run down of what the phone brings to the table:


So that's the specs.  The S6 'non-edge' is exactly the same without just without the curved edges and the features that go along with it.

Maybe that's a good place to start our discussion.  Just what is is that the Edge brings? 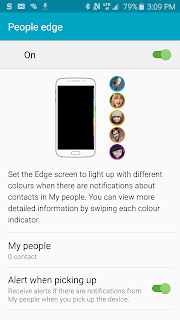 Well, from a purely aesthetics point of view it is HOTT.  Damn cool if you ask me.  Nothing better than sliding things over the curve and watching it bend.

Then there's the 'quick contacts' feature - where on the home screen there's a teeny tiny little bar on the top right where you can slide out from the edge to bring up your favourite contacts (assignable) and then as you get emails/calls/texts from that contact a little spot will light up on the edge to help you know who's calling or texting etc...

The other neat thing about it is that while it's laying face down the light for that contact will shine in such a way that with the edges just barely visible they can light up with the colour you've assigned.

That's really neat - and works when it's silent, so if you're in one of those "no phones" meetings you can find out if it's an important call you need to take or not. 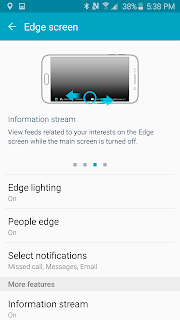 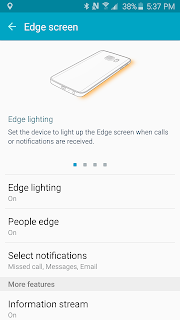 There's also a possibility to set up the 'information stream', but I could not get it to work.  Most likely because it's only pulling the information from the dialer or text messages - but as it wasn't my main phone I wasn't getting texts or phone calls on it; and it doesn't pull info from Hangouts or Gmail etc...

So what separates out the S6 edge from the S6 is just the edge ... it would be neat; however, I've found that in practical use the edging of metal that separates the back from the front is now super skinny, and the edge of the glass that's on the side of the phone is somehow 'touchable'... meaning I'm constantly touching the phone when I hold it.

It was really noticeable as I took it out for some Ingress'ing and I was getting every Glyph hack wrong because of it.  Often I'll tap some icon on the home screen and it looks like it's about to activate and doesn't (noticeable when trying to open folders).

Let alone it's nearly impossible now to do the 'palm swipe' for the screenshot - so you have to do the 'iPhone version' by holding power and the home button.

So - for me, that's annoying and I'd really want to go back to the S6.  I can live without the 'edge notification'.

Okay, that out of the way - let's look at the rest of the S6 and what it has to offer - because it's really quite good.  No more can someone say "well, the Samsung line up is just bloated and slow".

This thing screams along in apps and performs VERY well.  The camera is great; the screen, in QuadHD is just great - not even to mention the ULTRA vibrancy of the image that the Super AMOLED offers (personally I find it overly bright and saturated, but that's just me).

Samsung doesn't quite deliver on the power - being only 2600mAh, but it is really an ultra thin model here, so space was an issue.  That being said, power drain was consistent to what I've seen elsewhere, and you should easily get 8-10 of an average day.

That not enough power?  Well, they've crammed in both PMA & Qi wireless charging to top you up where ever you have a Qi charging station (psst... win one here).

Still need more?  Well, they've tapped into the Rapid Recharge fad and they claim that in just 10 minutes of charging you should get about 4 hours of use. 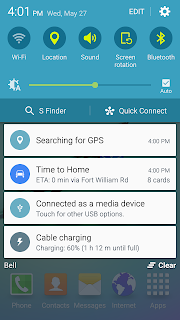 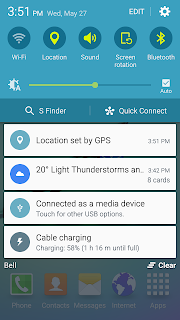 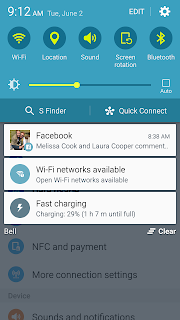 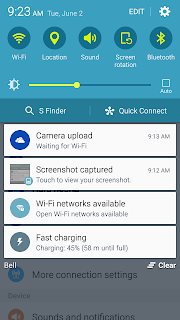 The camera, although no longer the 'widest' with it's f/1.9, it still produces some very nice quality photos - and probably the best reason most people would like this phone.

Getting to the camera is only 2 home clicks away; even from when it's locked.

The camera is fast and has lots of options and features you can play with.

My favourite was the 'surround shot' mode; which is the inverse of the photosphere (i.e. taking a photo from a stationary position all around you) - where you walk around an object taking photos and it makes a sort of '3D model'.  Really it's just a simple video that you can scrub back and forth on, but still very neat.

These surround shots can be exported as an animated gif/movie.

If Samsung can find a way to make these viewable outside of another Samsung phone, that'll really take off - especially for the Kijiji/eBay folks.

Here's some sample shots - as you can see the surround shots appear as just one photo.

(Hopefully this works... Minus stopped working for me - so I've uploaded samples to my Dropbox - click here if the gallery doesn't load - failing that here's OneDrive)

And there are other 'apps' you can download for the camera, like sports mode, or food shot, etc...

Typically folks like to berate Samsung for their bloat.  Sure enough - open the device and besides the standard apps (gallery/email/etc...) there is a total of 25 apps pre-installed.

But only 7 of them are from Samsung.  11 of them are 3rd party partners - which you could still blame Samsung - but most of them you'd install anyways (Facebook, Box, Dropbox, ...) and Peel is just a great app anyways.

The biggest offender I see here is Bell - with 7 of their own apps.

Need more convincing on this beast?

Samsung will offer you some freebies - with the Galaxy Gifts. 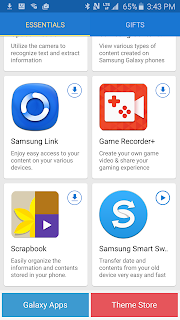 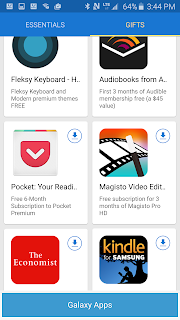 Sure they still have their own app store, but there's plenty of freebies you can get.  But be warned, some are a bit odd.  Like the Hobbit game, you're supposed to get some free Gold out of it.  I installed it from their store, opened the game and it's saying it's "outdated" and then it'll take me to the Play Store which says it's up to date.

It is also a little 'odd' that the camera lens is jutting out.  Basically what we made fun of in the iPhone 6 for it also has it.  I wish it didn't do that... but it is just so slim and light, I can see the reasoning (yeah, that's me eating a little crow.. I still don't like it).

Everything else about the phone will just be pretty much the same as you've seen in other devices.

Multitasking/dual window is a pretty neat feature now that you can have one frame above/below and another in the other.  Normal for more Samsung, but it was neat to see that the frame can act normally like a regular homescreen (you can see me using it to multi-task).  I don't think you could do that in previous. 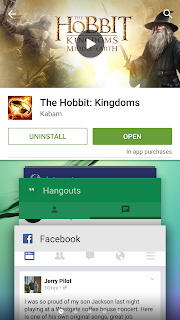 My biggest issue with the device is the homescreen - it sort of sorts it on its own.  You can manually rearrange, but there's no possible way to sort them alphabetically; which is a real let down.  So, immediately I'd be installing my own launcher.

Overall, I definitely would highly recommend the S6 to enthusiastic users.  But I'd shy away from the Edge unless you really tend to grip you phone with just the light tips of your fingers.  Those with sausage fingers like those on my grubby mitts will find it a little bit of a nuisance.

This is definitely a new era for Samsung - building lightweight systems with just the right innovative features in quality hardware (inside and out).

But don't take my word for it - go check it out for yourself.