[Review]Make the most of your phone's camera with Photojojo Lenses, Gradient Filters and Gorillapod

Posted by Ryan Moore on June 29, 2015
[Update - I was reminded that if for the lenses you needed spare rings, just email shop@photojojo.com and they will send you replacements]

So, I've been given the LG G4 for the past while to review and part of what makes this phone so great is that it's not just a 'spec bump' from last year ... while some specs did increase, others just 'got better'.  Especially the camera.  Sure there was an increase from 13 to 16 megapixels, but the OIS got better (3 axis instead of 2), the colour spectrum sensor, DNG support, etc...

With a better camera now in my phone I really want to make the most of it.  As such, I've looked for some cool accessories, and what better place to look than +Photojojo - an absolute joy to deal with.

I've reviewed some of their toys last year and this year they've sent over some great accessories for me to play with:  Photjojo's Phone Lenses, Mobile Gorillapod, Dream Scope Filter Kit 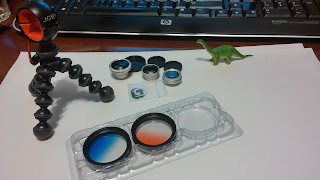 Photojojo has all sorts of fun for you to take some cool pictures with your phone... they even have a 'phoneography' course via their "Photojojo University" for just $10 - pay that and then you even get a $10 off gift card on your next purchase.  So it's like it's free!

But let's see what they sent over. 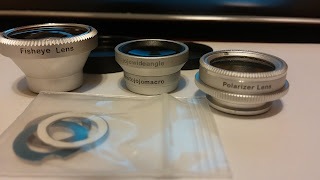 Normally, when you think about 'photo accessories' for you phone, these are the typical first things you hear about.

The idea is you get a special little sticker that allows the magnets on the lenses stick to your phone.

I had some trouble getting mine to stick properly, eventually having to resort to using a clamp to hold down the sticker on the camera lens of the phone.

Nothing got harmed, but ensured a strong 'stick'.  Note:  it didn't work well with my G3 as the camera lens was a little small and the ring a little big, so that when I go to take off the battery backplate it knocks off the ring too. 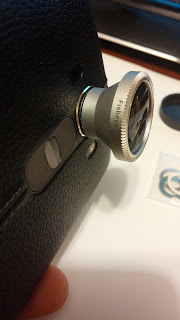 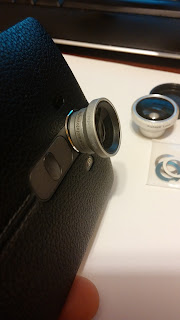 Each lens came with about 4 rings for you to try out, just in case you're like me and had issues getting them to stick, or you just want to share with friends.

So how does it work?  Well, once the sticker is on good the lenses actually stay on quite well.  Focusing had a bit of an issue with some (especially the fisheye) as the lens could block the laser autofocus, but still worked okay, just not as fast for the G4 as I'm used to.

For the G4 I'm using the actual lens on the camera is recessed enough in the body that I did get some vignetting on my photos.  So either use some digital zoom to remove it, or just be ready to photoshop after. 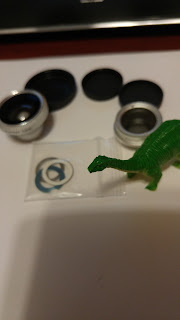 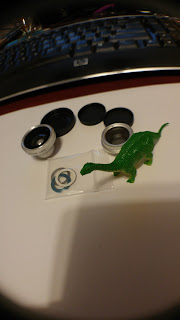 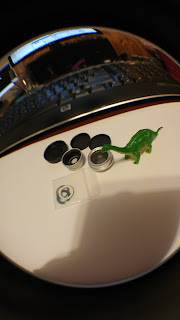 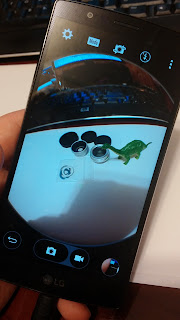 I've never been one for Fisheye, but I guess it has its place.

Trying out the lenses on friends iPhones some models had vignettes, and others didn't (the 6 seemed to have a little, the 5 didn't and 4 didn't).  My wife's S4 seemed to be just fine.

I didn't take any samples with the C-Pol filter as we haven't had much chance lately with the weather, but the idea with a c-pol is that it'll reduce any 'aberrant' light waves (as the name suggests only allowing one polarized type of rays) from getting into the camera lens.  Thus, where you'd normally see overblown sky shots, or harsh sun reflections on glass, you'll get a much clearer picture.  My only issue is that the magnet is a little too easy to pull off for being able to twist the circular portion of the filter (to get the optimum effect); and often would just twist the whole assembly on the magnet.  Unless I was using a tripod, this often meant moving the camera and then having to re-frame, and then re-polarize.  Tricky, but worth it. 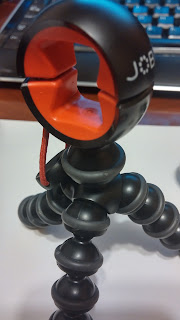 I do love me some tripod action.  I have a fuller sized Gorillapod, but I wanted to try one out specifically for mobile.

This is quite a deal smaller than the other, so much easier to bring with you just about anywhere.  The way that you secure in your phone is a little trickier as it has to do with an elastic band.  Honestly, looking at it, I didn't think it would hold it in place, but it did.  Even for my 5.5" G4.

However, it does hold it at a bit of an angle, so adjust your top portion accordingly.  Surprisingly it didn't fall over - again, your mileage might vary - adjust your legs accordingly. 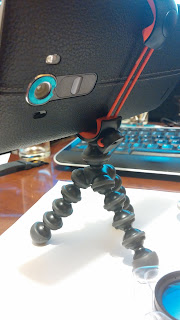 Again, you'll note the blue ring from the magnetic mount (the blue part is a plastic cover, I could peel it off, but meh)

This one is a bit neat in the fact that it has a special holder that attaches to your phone.  I'm reminded of my Cokin filters that I had for my SLR, with a special lens mount and you slip in the filters.

The holder holds onto the sides of your phone and then you position the lens holder over your camera lens.  The main problem with the recent LG phones is that all the buttons are right where you'd line it up - essentially covering the power (thank goodness for knock-on and double tapping the system bar to sleep).
The gradient filter threads into the holder via a 37mm holder.  So if you have other filters of that size (dang, most of mine were 58mm for my SLR or 18mm for my camcorder) you can use them as well (you could even stack them).

The holder also has a spot for a threaded tripod mount, allowing you to take advantage of better framing.

I've never been one for gradient filters.  And my experience with them has been dodgy.  One of the issues I tend to have is finding out exactly where the filter is - I wish there was a marking of the 'top' on the ring, as once it's on, I have a hard time seeing the filter (I believe they're set to about 1/3 stop gel density - meaning it's a slight change; but the blue is fairly dark, so maybe 2/3 for that).  You can check out my samples below (again there hasn't been much of a good sunny day to showcase the effect) 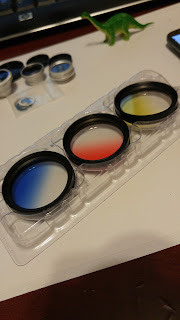 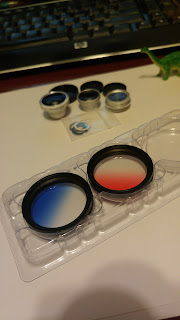 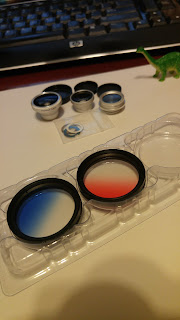 In the right hands, gradients can really make for some impactful shots.  Especially in spots where the sun/sky are there as they tend to be overexposed, so this can help 'tone them down'.

I was sent the blue gel, pink gel, yellow gel.  Blue to really help your skies pop, pink for some warm sunsets and yellow for where it's got too much blue. Even play around with them 'upside down' to get the effect you want. Don't forget to experiment with these in B/W as you can really notice a difference there some times.

Remember tho', the important feature of a grad filter is that it's almost not noticeable.

So those are some really fun accessories to play with and make your phone's camera really pop this summer.