Posted by Ryan Moore on June 18, 2015
I don't know about you, but I'm not much of a gamer, but I want something to replace my Google TV when it finally no longer works.

To that end, I purchased a Nexus Player a while back and it's been fun.  It's got its hiccups, and one of them the limited 8GB storage.

I've contemplated the Shield TV, but at $200US it's a little on the expensive side for something I wouldn't use that often.

Well, remember the Razer Forge TV?  It used to be not so available in Canada, and now it's suddently appeared on the Google Play Store.  And they're offering a 'bundle deal' which'll save you a few bucks. 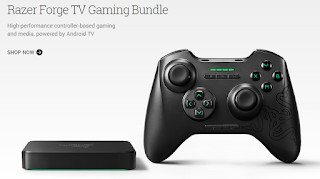 So, from Razer's site, the device'll run you $125, but without a simple remote or a controller you'd have to use your phone... kinda lame, so you'll have to get a controller at $90.