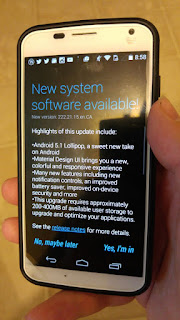 I know, I know. It is hard to believe. It feels like crying wolf after waiting nearly 7 months to get Android Lollipop on the Moto X 1st gen (2013) models. Yet, here it is!

For those of you who are not in the know - Motorola was very good at sending out updates to the Moto X in 2013 and 2014. The phone had even beat some Nexus devices to Android KitKat. Not bad, right?

Well, unfortunately, Android Lollipop (5.0) was found to give the Moto X 1st gen a lot of grief due to one of the processors that allows this device to always listen for the "Okay Google Now" command. Unbeknownst to us with this device, we had a long wait ahead.

At one point, Motorola was close to releasing Android's latest version to this smartphone. However, they felt it was not up to par, and decided to hold off for 5.1. The wait continued.

Over the past couple weeks, Android 5.1 began to roll out to the Moto X 1st gen in various parts of the world. Either as a soak test, or the full blown thing. As of right now, Rogers Wireless has sent out the OTA, and as I write this, my Moto X is downloading the update now, which is around 600MB.

If interest is shown, I'll be sure to follow up with another article with my thoughts on 5.1 to see how it has effected this older, yet still fantastic phone.