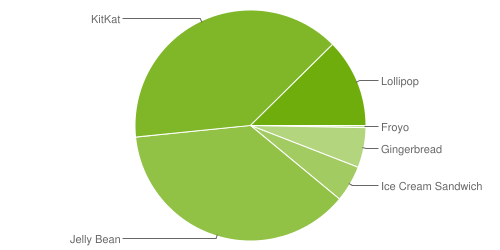 Try as you might - folks out there are want to say that certain things are dead, or aren't catching.  I just got out of a whole of reading about how apparently g+ is a dead social network.

Now, today, Google's released the latest platform distribution in the developer's dashboard to showcase what devices are using what version of the system.

Some will say that Lollipop just isn't getting the traction it should (c'mon, look at iOS 8 adoption rates).

Me, I have the data to say it's doing just fine.

Yup, when you look at the system over time, Lollipop is trucking along just fine.  But that's my own personal view.

Here's what Google produced for today:


Now, when you look at the growth over time, like I have done in the database page you'll see that, yes, Lollipop slowed its growth this past month (from +2% to +4% to just +2.6%) it still is growing faster than others.

KitKat took 7 months to crack 10% - Jelly Bean averaged 7 as well (although you could argue with the incremental bumps it 'messed with the numbers').

I'm not including 5.1 numbers yet, as they're still slightly too small.  I should probably set the graphs up to combine some of the codenames - yet 4.1/.2/.3 were still such different then 4.4 and then really is 5.0 that much different than 5.1?