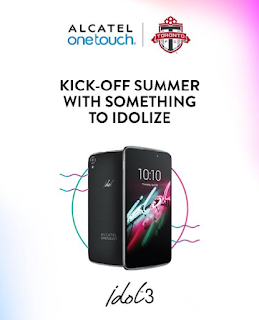 I really love my little city of Thunder Bay.  It's really 'god's country' and is just gorgeous.

But sometimes the seclusion can seep in when you realize you're going to miss out on some events - one of which just came in my inbox this morning - and invite to the Alcatel OneTouch Idol 3 launch.
So, it looks like on June 20th they will be doing their Canadian launch, and it will coincide with a couple of football matches.

The special invited attendees will get the chance to play with the phone as well as meet some of the players... and then a secret special announcement that apparently we wouldn't want to miss.


There's no listing on the price as of yet, or which carriers will be carrying it.  In other regions it's going for about $200... so our price should be about the $250 range.  Which still is a pretty good deal for what you're getting.

Really wish the prices on flights were cheaper and I could rush on down for the day to Toronto.