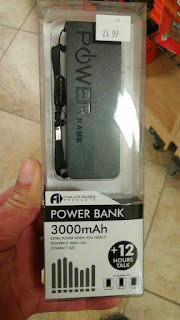 I've been keeping an eye out for a relatively cheap and small power bank to keep with me at work. Due to the nature of my job I'm often NOT near a plug-in for the majority of my day.

Some days I'm running in the red even before I leave work. I also tend to have battery anxiety – previous devices have often dropped rather quickly after 50%, so I get uncomfortable when my battery drops below half. So – my quest began. It had to be fairly cheap and small. Those were my criteria. Ideally,

I'd found a few that were close, but nothing that really got me that interested. Then my GM at work decided to bring in some power banks to sell beside our other chargers, cables, and headphones. Mind you, this is a gas station/convenience store, so we're not talking high-end products, but functional none the less

Anyway, I took a look and found this. Size looked good, package claimed 3000mAh, and the price was certainly within my established budget. Let's have a look! 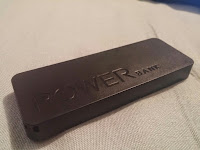 It's fairly compact – measuring 107mm x 39mm x 11mm thick according to my measuring tape. Stamped into the plastic on top reads “Power Bank”, while on the back are the specs: Input 5v/ Output 5v/1A, along with the usual regulatory icons you’d expect to find.

Going around the sides of the power bank, you'll find 3 of them completely featureless. The 4th side is where the action is. You'll find 1x USB port, 1x micro USB, and 1x lanyard attachment with a lanyard included (I removed mine as I tend to find lanyards cause me more grief and frustration then they're worth).

The final feature is a 2 color LED, red flashing for charging the pack – when it's fully charged the LED goes out. If you're using the pack to charge your device it changes to a steady blue. I haven't fully drained it so I don't know if there's another LED option to tell you your pack is just about dead. 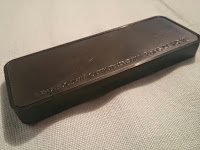 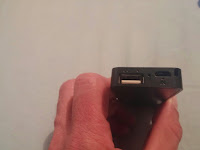 (Obviously I shouldn’t quit my day job to become a hand model!)

I got mine in black, but it's also available in red as well. The baby brother to this pack is rated at 2200mAh in more of a “lipstick tube” in hot pink or lime green. The package also includes a short USB cable in white, which I assume is the standard color no matter which color you choose). The larger 3000mAh power bank I purchased was priced at 21.99 - and the smaller version is $19.99.

I don't have the actual charging and discharging rates. However, a couple days after I bought it, I went out playing Ingress, so I decided to plug it into my phone and see how fast my phone drained compared to no battery packWe just did a short run (about an hour), with about 2-4 bars LTE, sometimes switching to HSPA+ and back. Over that time I manage to gain 2% my phone's battery, despite the drain that Ingress usually imparts on my phone (data, screen on full almost the whole time, GPS running constantly). As another test, I plugged it into my phone at 78% and opened up the app Ampere. I realize this probably isn't the most accurate measurement, but I've checked it several times. According to the app, charging rate is just above 2000mA, which makes me think this pack will charge or discharge as fast as it can, depending on what you've got it plugged into. My 2mAh charger seems to top it off fairly quickly, slightly faster than it charges my G3 from my observation.

I haven’t dropped it or had it very long - so durability and ability to withstand abuse is an unknown. A hard drop would likely crack the plastic housing or jar some of the internal solder joints loose. Other than a basic manufacturer’s warranty against defects, you’re on your own - as would be expected. A recognized brand name may buy you the reputation of an established company, and likely some form of customer support should things go bad. With this, you’re simply buying a battery, a couple of USB ports, and a plastic box to hold it all together.

Would I recommend it? Sure, if: 1) you need it now and can’t wait for eBay or Amazon to ship it out to you, and/or 2) you’re ok with buying something that “works well enough” without having to spend money on brand name gear that does the same thing almost as well. Of course I have no idea if this pack is actually a full 3000mAh, or if that’s an exaggerated claim - which is another benefit of brand-name gear. As it stands though, it works.

(UPDATE: I’m on my 2nd unit now. I dropped the first one on concrete, corner first. The problem was that it also damaged the nearby USB port (along with smashing that corner into jagged pieces. The device would accept a charge, but no longer charged a device when connected. So durability I would say is definitely not great. My G3 has taken a couple similar tumbles, protected by a cheap TPU style case and it’s come away just fine. A couple things to note after using it for a while


Its a great short-term solution, enough to bump you through the day if you’re running low. Overall, it is what it is, and I got what I paid for (full retail). I think paying that same price on eBay or Amazon would have yielded a better product, but if you’re in a pinch it will get you by.