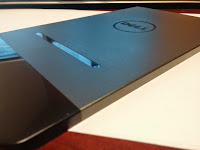 So, during CES we heard about this 'world's thinnest tablet' being launched by Dell.  Not Samsung, or LG, or whoever... Dell.  Not the company you think of when it comes to tablets; I still keep hearing "dude, you're getting a Dell".

But folks not only were drawn to seeing this 'thinnest' tablet, but they liked it.  It had some really nice design and feel, and had a funky 'real sense' camera. 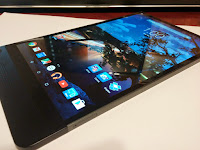 After my review of the 3000 series tablet, I knew I had to try this one as well.  I was eager.  I had read what I could, and was ready.  I was even more excited to hear that Lollipop had rolled out it a day or so after I had unboxed it.

Let's dive in
First, let's go over the specs:

Here's my video take on it:

Picking up the feels like the world's thinnest.  It does, and it has a real sleek finish with the brushed aluminium .  The buttons feel right, and it just feels 'clean' all around.

Until you get to the bottom where that camera is.  ... out of place.  More on that later.

There are very little to the bezels on this device, so I was always cautious how I held the tablet, and with that camera chin, I was always gripping it about there, which meant covering it up and with my greasy hands meaning that when I went to use the camera it would be a little smudgy.  And not just the front camera, but the rear ones as well.

Notice I pluralized the rear cameras.  There's 3.  One , and 2 stereoscopic cameras to help with depth (more on that later).

So, no matter how I held it, I felt I was always holding it wrong... too gingerly, or carelessly mucking up the camera lenses.  Poor decision in my opinion.

Outside of holding it, using the device was a dream.

Not only does it really hold its own in terms of performance, it LOOKS AMAZING.  This is where that 2500+ resolution really shines.  It looks good on a phone, it looks GREAT on a tablet.  Just the right density.  Everything looks sharp and vibrant.

Plus, it's not running awkward 3rd party OEM variant of Android.  It's running damn near stock.  If there's any skinning going on it's hard to tell.

Lollipop makes things look a little "small" compared to how it looked Kit Kat, but it's still nice to be stock again.

Not only is it stock, Dell has only added a couple apps - 4 of its own, and 5 3rd party ones.  So, nothing onerous or gets in the way. 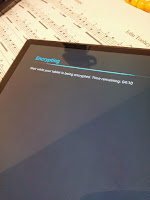 So, before I get into the specific software, I just want to reiterate how well it performs.  When I first got it, it was really good.  Running heavy 3D games without issue.  When it got the update to 5.0.2 it turned on encryption for the device (funny it never asked for a password or got me to set one up) and it still ran those games as smoothly after the update.
Oh, and I wanted to mention the space.  It only gives 16GB.  Which, after the system partition is only 9GB you can play with (so much for not having much bloat).  Add in some games and if you connect your online galleries to the app (more on that later) you can run out of space pretty quickly.  Ouch.

Now, on to the specific Dell software.

There's not much to really mention here.  Like on the 3000 series, there's the Maxx Intel Video available to play with.

As someone who tends to 'fix' other people's devices, the "My Dell" screen is nice to run some standard tests with to make sure everything's working properly.

The only time you'll notice any real "Dell" customization on the device is using the camera and the gallery app.

First, let's go into the camera app.  It looks like a pretty standard camera app... fancy.  But, remember those 2 extra cameras on the back?  They're there to help you with determining depth, which you can select as a 'depth snapshot'.

is to get the right scenario for it to work

We'll talk about how to use it after you've taken the shot later.

And that's about it for the camera, nothing fancy, nothing complicated or crazy.  Just... not that good a camera.  Add in the fact that I'm always adjusting how I hold the device and my fingers are all over the lens so it's usually a little hazy and then needing to be wiped clean.

You can jump straight to the preview (as expected), but if you did a depth shot, you can't do any of that funky editing ... for some reason you have to hit the 'go to gallery' button (I guess this is just a quick preview mode)

Now, let's look at the gallery.  You can, like other OEMs, add in your online galleries.  The only problem there is that when you becomes a HUGE mess... so easy to sort through, so you can then try to turn on/off sections to find what you want.  Also, these online galleries can take up space on your device, in my case almost 1GB!  So be careful.


Looking through the features of the gallery, it's nice and clean.  It's got some social features as well as mapping features.  What I like is that when I hit info on a picture it's a clean looking screen with little icons to help you (looks almost Metro'ish). 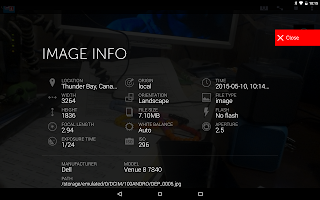 Then you can get into editing the photos.  What's really nice is they have a few walkthroughs to show you how to use what it is that it has.  Definitely really thinking about the end user here.

With the depth snapshot you can now play with the measuring tool (provided you weren't too close to items, etc...).  You can measure distance between objects, or even area.  Not really a 'requested feature' I imagine, but there's definitely a niche market for that usage somewhere.

With the depth you can also adjust blurring .. think tilt shift, but with all the right data properly!  Even some of the editing will allow you to selectively edit based on depth (like the BW adjustments) 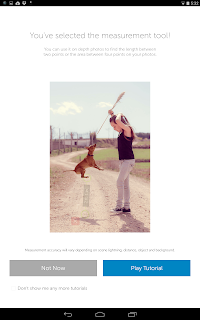 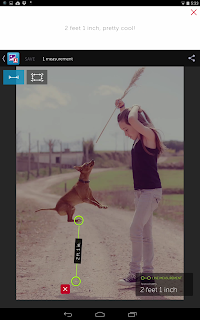 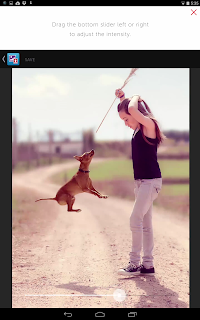 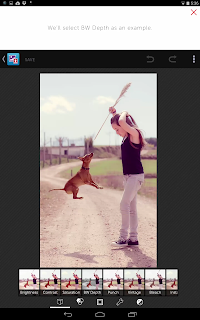 Overall - it's a really cool tablet with a lot of potential, I just can't get over the placement of that camera end.  For me it makes using it an awkward experience.  Move it to a traditional spot and blam... it's probably the best tablet out there.