Returning your Canadian LG G2 back to stock [ready for the Lollipop update?]

Posted by Ryan Moore on April 05, 2015
So, since getting the G3, I've been using my G2 as my guinea pig.  I used to have a couple Galaxy Nexus devices kicking around where I'd root/flash ROM them all the time.  So it was a little different with my G2...

Regardless, I am finished playing with ROMs, especially if it were my daily driver.  I had tried several ROMs, CloudyG3, AICP, etc... each were nice and had their quirks, but I'm really anxious to see what LG has in store for when they throw Lollipop OTA.

In order for that I had to figure out how to flash back a stock ROM for the phone.  Give me TWRP and a .zip and I'm great.  But sometimes OEMs have their own flashing tool, like Odin for Samsung.  LG has "LG Flash Tool".  And these things usually give me the heebie-jeebies as you often don't have many options, so I'm always afraid of bricking.

So I followed the thread over at XDA and it was fairly straight forward:


All the downloads done?  Great, extract the LG Flash Tool somewhere on your drive, and to make it even easier move the KDZ file into that folder too. 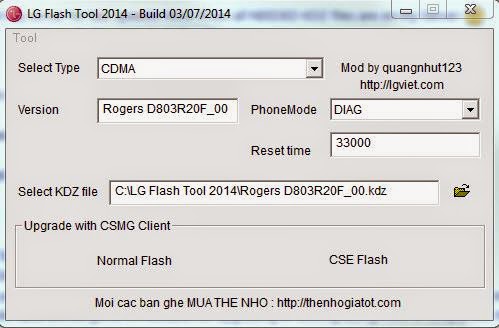 And that's it, let it's do it's thing and eventually the phone will reboot back into the normal original screen.  Again, check out the XDA thread for any questions you might have.

One word of caution - for some reason, when I flashed the Bell KDZ file on my device whenever it would reboot it would forget the WiFi passwords.  Doing a Google search it sounded like it's a common thing for the Bell device.  Now... this was originally a Rogers phone, but I've unlocked it for Bell, so that might have something to do with it (but others were having the issue out of the box for a Bell phone).  So, I just flashed the Rogers KDZ and if I needed to; put in the APN for Bell.  Everything's working swimmingly now for me.

Now just to wait for the LG G2 Lollipop OTA!