NFC Ring brings a different feel on a 'wearable'

Posted by Ryan Moore on March 12, 2015
I'll be the first to admit.  When I got married, wearing my ring felt like a huge inconvenience.  I'd never worn a ring before, and even though mine was a pretty simple band, it felt like I had put a guitar metal slide.

Then I got used to it (too used to it, as I even lost my first one when I went swimming - my replacement now has an engraved warning about wearing it while swimming).  I barely even think about it while I wear it.

The same thing has happened with a watch now.  And with wearables all being the rage lately I've been wondering what else is out there.  I'd seen the NFC ring a while back and was very intrigued.  I even contemplated getting one of those NFC chips implanted (warning the link contains some photos for the not so squeamish). 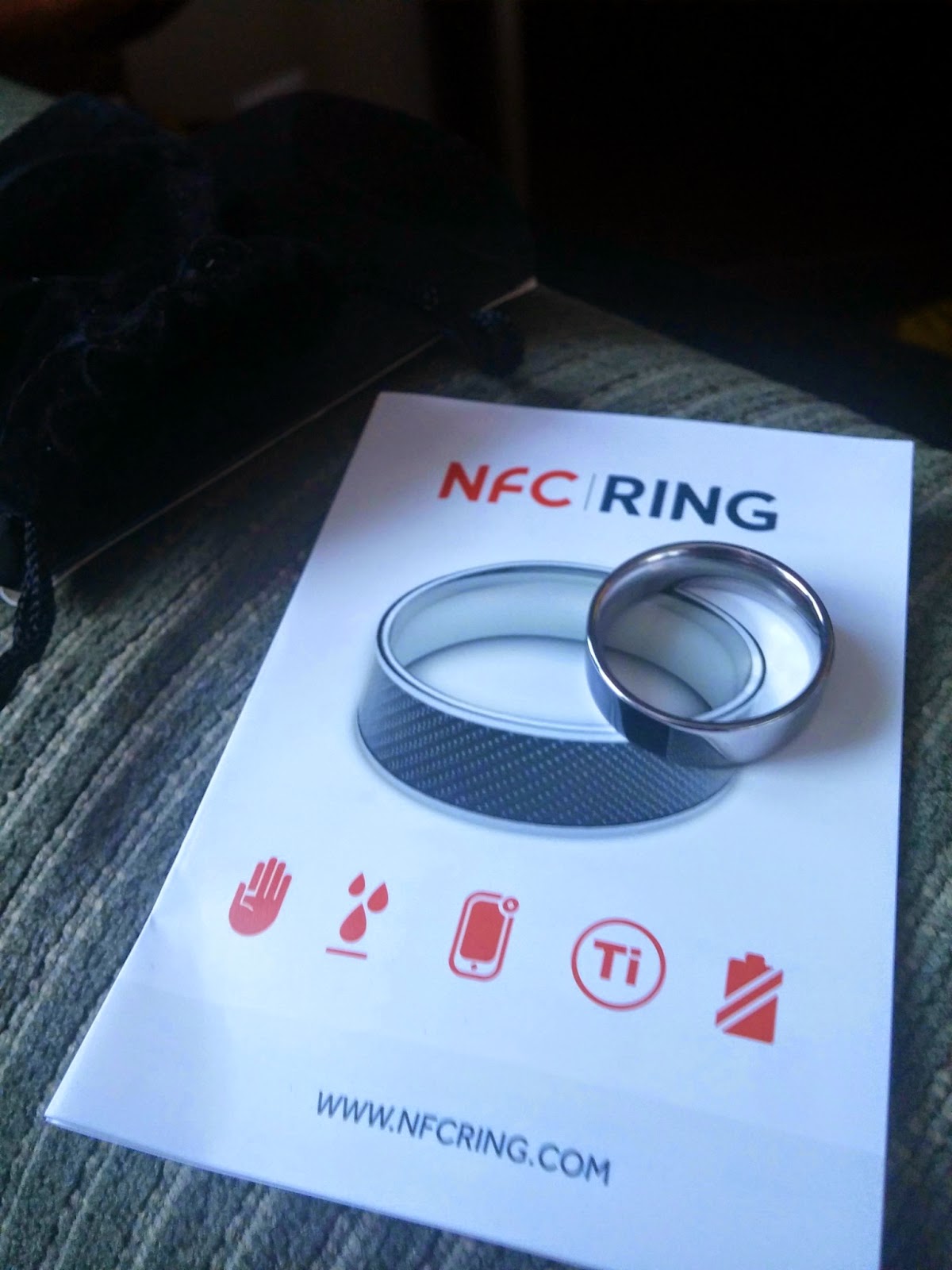 With a 20% sale on at nfcring.com going on I thought it was a nice safe way to test out an NFC wearable.  (sale is on until March 22nd)

As a quick primer, remember, I wrote an article all about how NFC can be used a while back.  It's a good read if you're at all unsure what NFC can do.


I was able to get the Signature model (which was only $50 after the sale), and unfortunately I didn't measure it quite right.  I had assumed to wear the ring on my ring finger on my right hand.  But I didn't do a good job with the measurement and it's quite a bit larger, so it rests now on my middle finger of the right hand.  Which is a fortunate accident as it actually sits a little better and closer to my 'sweet spot' on the back of my phone.  But just in case, double check your sizing, and they have a page dedicated to that.

The Signature model comes with 2 sides, one's a bit of an 'onyx' look, and the other a bit of a geeky look with an exposed look at the NFC chip.  According to their website:

Spin it one way to show off the technological power your finger now holds or spin it the other way to fit in with your reindeer brethren. The signature ring fits in equally well with every outfit, even those skinny jeans you bought a while back and you forgot you're only supposed to wear them ironically.


The site has a lot of little funny bits here and there, even in their manual.  Speaking of the manual, it reminds you that it is water resistant up to 50m (they don't recommend going down the Mariana trench), but be careful if you're scratching it up, it may compromise that resistance.

So... it's taken a couple days and I'm kind of used to where it is.  It's weird wearing jewellery, but I know several folks who wear a lot more, so it's nothing gaudy.

Now how does it operate as an NFC tag?  Quite well.  It's a little more 'localized' than some NFC tags I've seen, which is good, so it allows me to be a little more precise with how I tap the 'sweet spot'; I wouldn't want the phone reader going off all the time. 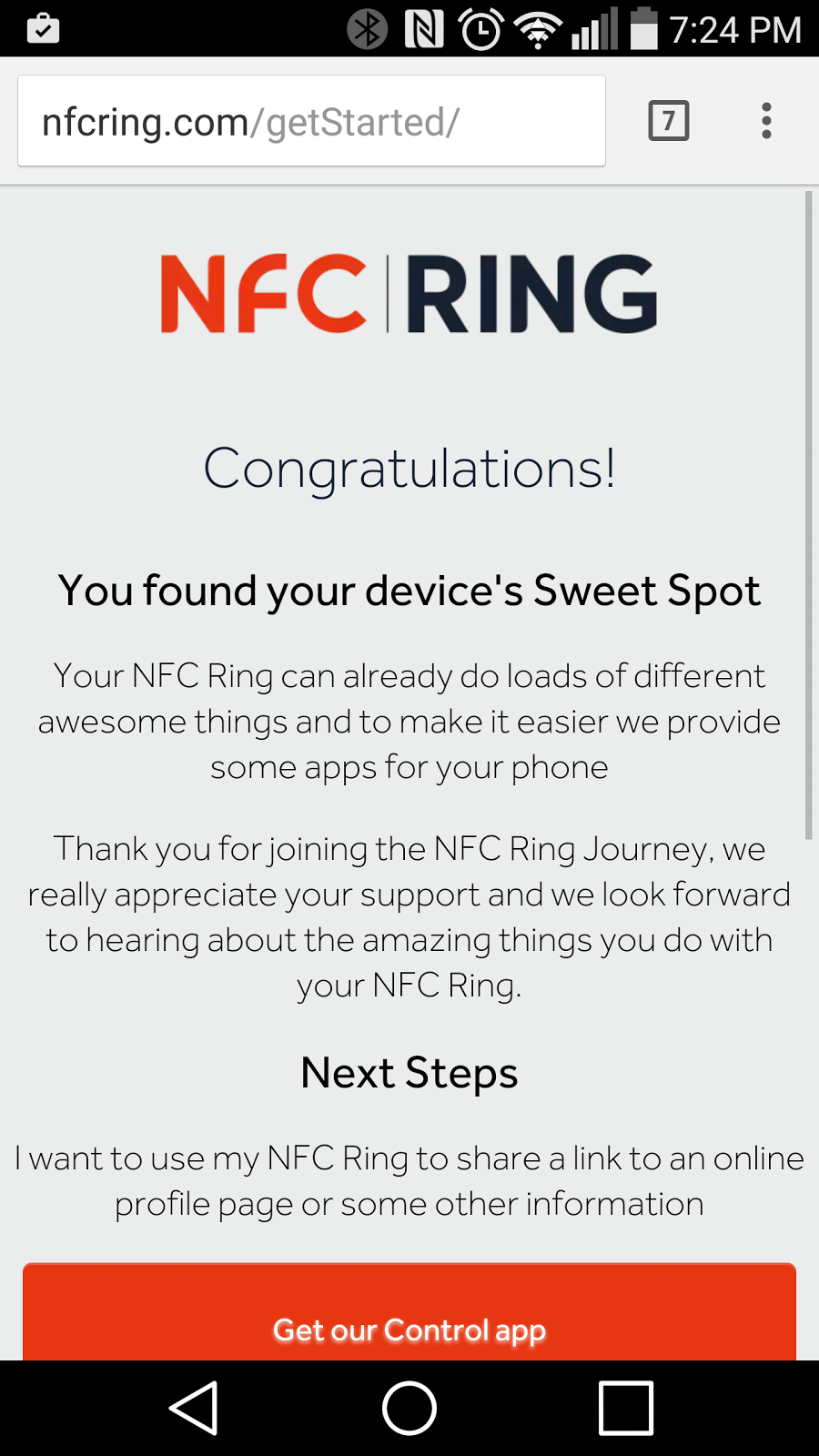 They recommend 2 of their apps to be used with it to change what it does; as you start out it only brings you to the 'getting started' page, where they bring you to links to play with.

The NFC Ring Control app is similar to Tagstand's Trigger, but with much less functionality (essentially just putting URLs into the tag info).

I suggest looking at Trigger as you'll have more opportunity to really set up an 'action' when the tag is read.  I've been playing with my phone a fair bit to find out what it is that I'd like to automate, and haven't come up with a set behaviour yet.  But it's fun to play.

There's also the NFC Ring Unlock app to allow you to use your ring to unlock your phone, but similar to the 'trusted NFC device' option in Lollipop, remember, you'll still need to turn your phone physically on first.  So I haven't played with it.  But it would be nice to be able to use it as a trusted way to unlock your phone if my watch had died and I didn't want to keep entering my knock code.

NFCRing.com also sells the Samsung SHS-1321 NFC door lock (on sale for $180), which you could use with your ring to actually unlock doors.  That's pretty cool!  They have a contest on now where you could win one.

Overall, it's a neat little device, and it definitely has a few of my friends looking at my finger, as they don't expect me to have rings, and it leads to a 'look what this can do'.   They tilt their head and give me a little "oh, Ryan... you geek", but I think they're actually a little jealous and are probably wondering what they could do with something like it.

And I think that's the main thing.  You should have an idea of what you would want to do with the ring.  $50 is in that 'lingering' price range where it's not an 'insta-buy' where you say "why not", but it's not overly expensive either and makes it really accessible to a lot of people.

Once you have that idea of what you'd do, having it on a ring, means it's something that's nearly always with you.  An NFC tag on a key chain you may forget your keys, or you may leave your watch at home, or whatnot... usually jewellery is always on!

What would you do with a wearable NFC?