Posted by Ryan Moore on February 21, 2015
I know there were more than a few of us who have loved the 'mid sized tablets'.  Often tablets came in at 10" in the early days and as much as I loved my TF101, it quickly became too big.  Then the Nexus 7 came out, and it felt right.  It wasn't until the Note 8 that I really found it a little on the small side (especially as our phones were pushing >5") ... so 8" became the 'hot zone' for tablets.

But you know who hadn't made a tablet that size?  Sony... well in mid 2014 they joined the pack and launched the Z3 Tablet Compact.  It was part of their Z3 family launch, and what a successful launch.  (More on the Z3 itself later)

Sony sent me their Z3 Tablet Compact at the same time as the Z3 and you can really tell that they are one in the same family, but with one big exception on the tablet. 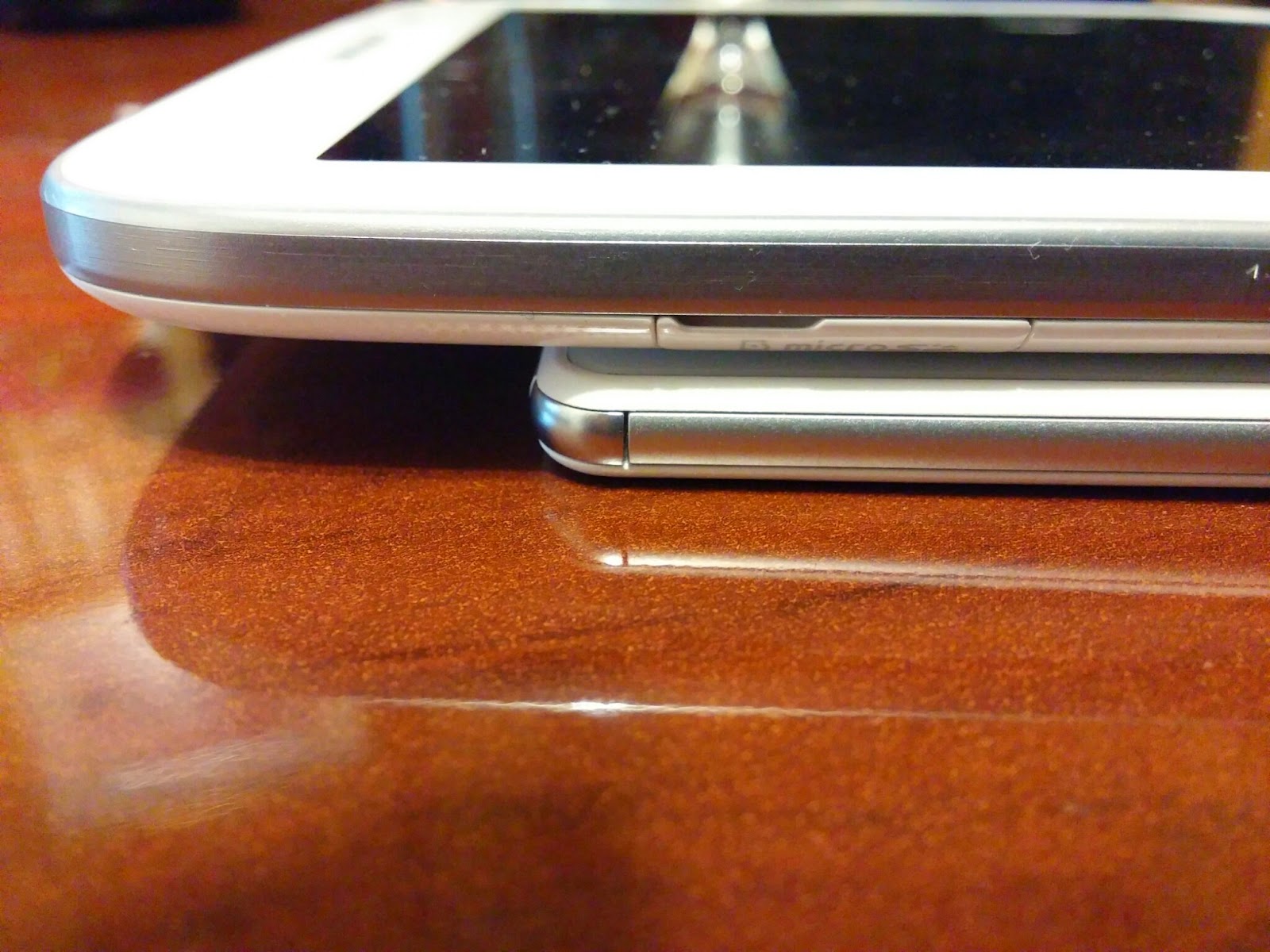 IT'S SO FREAKING THIN!


Really, this tablet feels paper thin.  My son brings home his cahiers from school and they're thicker.  It almost feels delicate (and more on that later).

And you would think for the shape/size they've probably sacrificed on something else, right?


To start off you're greeted with the classic Sony launcher and theme UI.  It looks gorgeous... but I'm definitely not a fan.  I dunno... it's not wrong, it's just not me.  Personally I'd replace the launcher.

The screen is very sharp.  Colours are a little... lacking, and there's probably some tweaking needed in the background settings, but I find especially that they can be overly bright, to a point sometimes greys come out more white than black.  Again, I'm just pickier than the normal person.

Before I get in to anything else, I do have to get some of my 'negativity' out of the way first.  People tend to give Samsung a bad rap when it comes to 'bloat' or, in more appropriate terms, 'added features'.  Well, in the past year, Samsung's gotten better, yet Sony has 'added more' themselves.

Let's just see here.  Opening up the app tray it's pretty full already.  I've separated out the apps that Sony has added in themselves as added features (not going to include things like the camera or gallery app tho').

What really kinda bugs me too is that 2 of them are just shortcuts to features in the camera app.

And then on the 3rd party app side there's only 3:  AVG (which I have a real disdain for anything antivirus), a File Explorer app (which IS needed) and Office Suite.

So that's 19 extra apps on your device.

One thing I did like was that for some reason on the Z3 when you do the Google Now gesture you get that huge "What's New", but you don't on the tablet.  Whew... so hopefully that means the phone will also have the option to remove it down the road like the Z2 can.

Okay, I lied, there are definitely more than one thing I liked about this device.


First off is the fact that it's really IP68.... which means that you could completely immerse this device beyond 1m (I think they say up to 3m) continuously.

Next is using the keyboard.  On a tablet at 8" it never feels quite right, so their default keyboard has options to be other one side, or split, or can be tiny and hover. 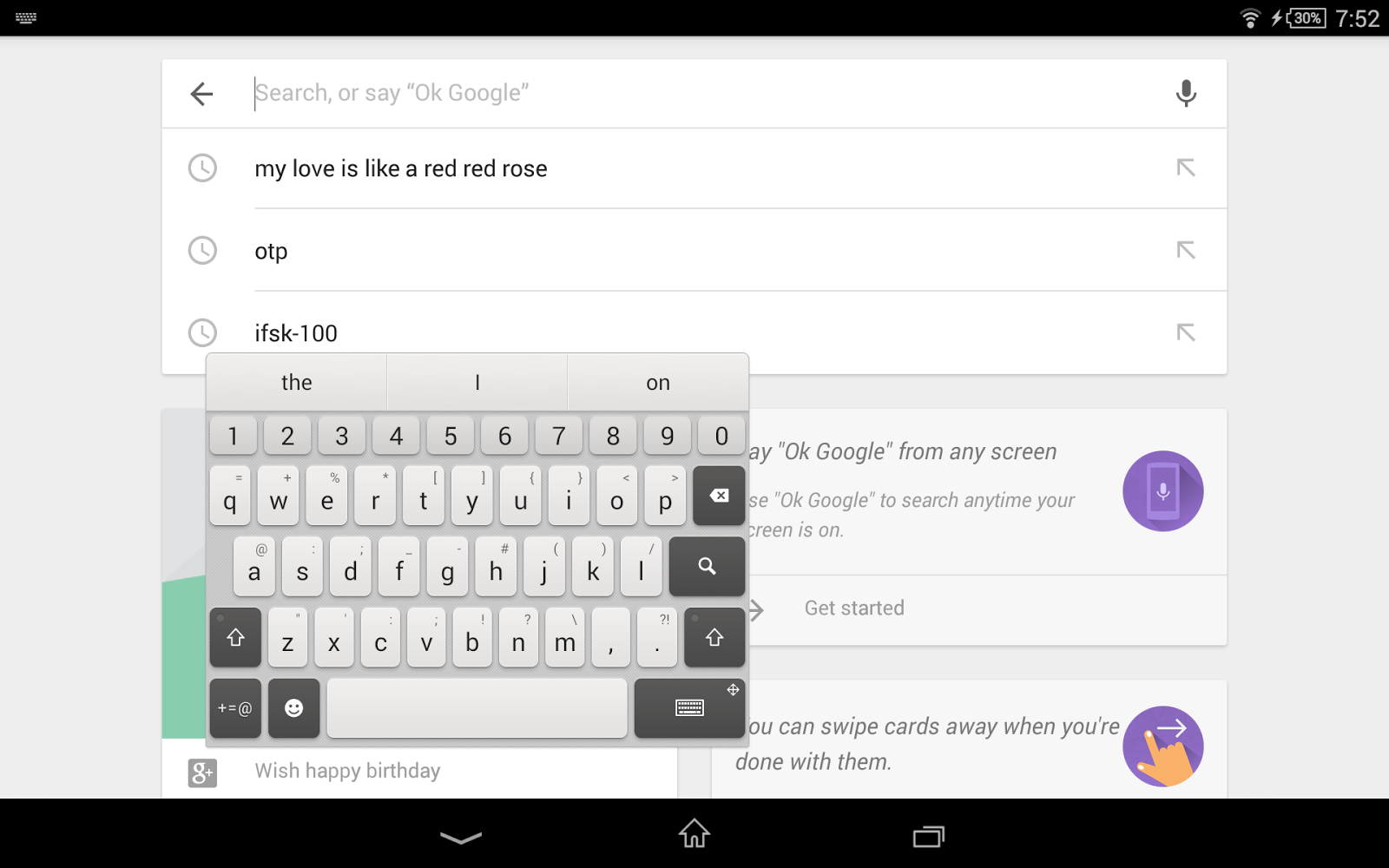 The other thing is that for such a tiny body, this tablet packs a HUGE battery.  4500mAh

That will last you a very VERY long time.

Then there's the processor - the Snapdragon family has been an excellent brain - and the 801 has proven itself in many of the flagship phones out there.  It's no slouch and matched with 3GB of RAM I hadn't noticed ANY stutter in any of the apps I used.  Whether it was quickly switching between 3D games or swiping quickly through menus or webpages, it handled everything with precise smoothness.

The display is very easy on the eyes.  Even after being on QuadHD with my G3 for a while now, I was hard pressed to 'see pixels'.  The crispness in the images and UI is amazing.  You expect some imperfections here and there, but with a TV maker behind this device, it really does a great job being a clean display.  Personally I think some of the colours were 'over done', and there is some contrast tweaking needed, but for the average person you wouldn't notice.

Sony has a slew of other Sony features, like being able to mirror your device with Sony devices, or the PlayStation streaming to your display, etc...

Personally I've not used them, but chances are if you're a Sony fan, you'll love that (that is VERY cool that you can just tap the tablet to your Sony TV's remote and control it).

All in all this is a fantastic device.  It performed amazingly well in just about every test I could throw at it.  I just wish I could minimize some of the UI.

Some might balk at the $530 price tag on the unit... but when you consider it's got a beast of a processor, lots of RAM, excellent battery, crystal sharp picture quality, and you could throw the thing in your tub... if you're into reading while bathing.  It's not out of the realm of considerability.  We pay much much more for our flagship phones without batting an eye.

Now, all that being said there is one thing that I tried not to talk about, but eventually I have to.  It's why I'm not doing a video for this device.

It has a bit of a problem.  Now, I don't know if I did it (I'm 99.99% sure it wasn't from my care - I baby the hell out of the devices that aren't mine) but when I took it to the basement here to do some write ups I noticed that it wasn't laying perfectly flat on the table.  It had a bit of a bend to it. 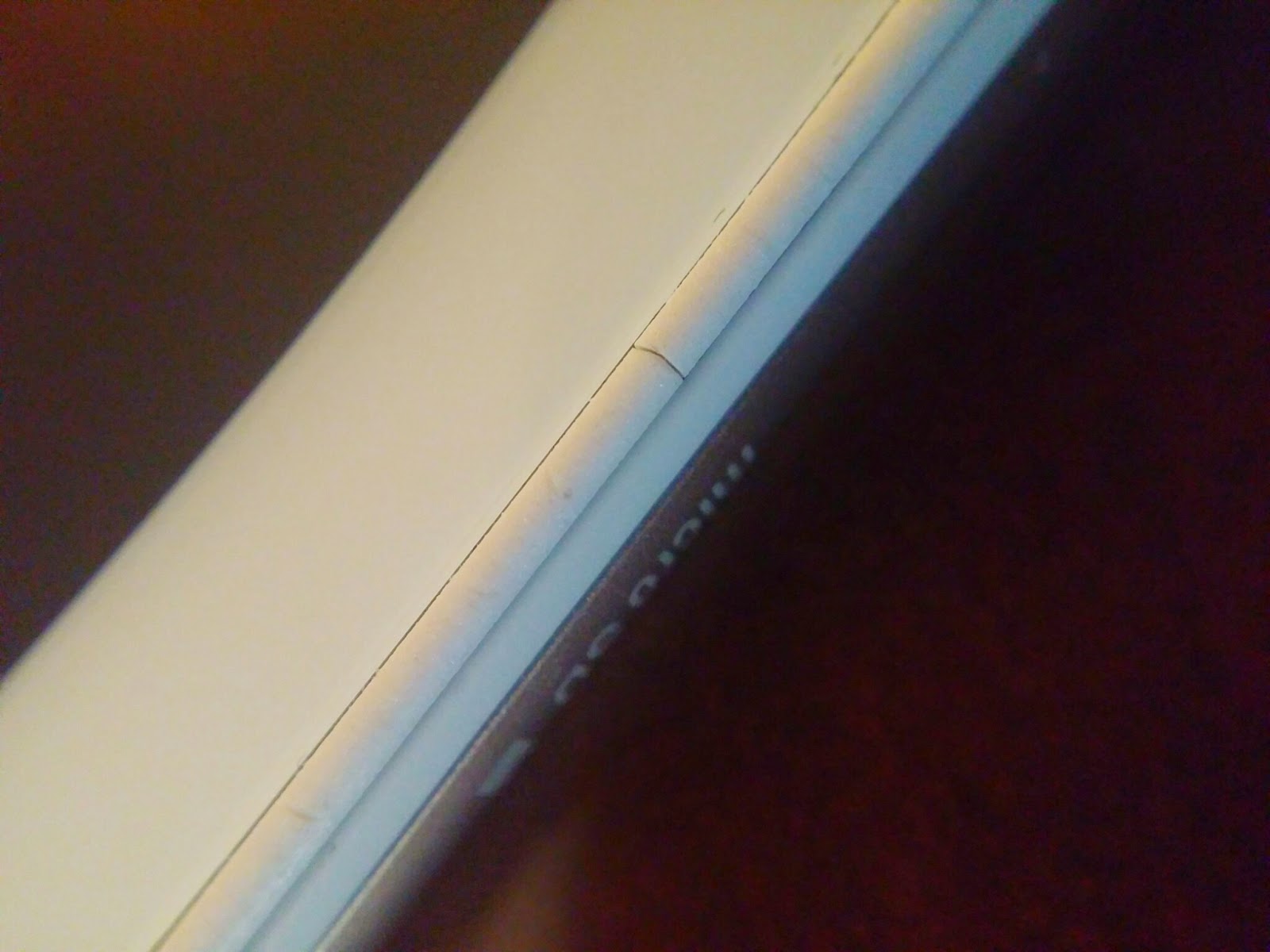 On further inspection I can see that the area where the microSD slot is has a tiny crack on it.

How that happened I couldn't even begin to tell you.

Look at the box it came in, these devices are released to the Sony PR team before consumer production to make the rounds to the bloggers, so it's had its share of use.  Which is why I hesitate to mention it at all.

That being said when you do pick it up if you were to try to do it only from the corner of the tablet (and if you do, you're a monster - you're ALWAYS supposed to pick up tablets and the link by trying to grip 'around' the device) the thinness allows it to have a bit of give.  Not a lot, but if you think about it, enough here and there could cause a stress fracture at the weakest point (i.e. where the microSD card slot is and the frame is the thinnest). 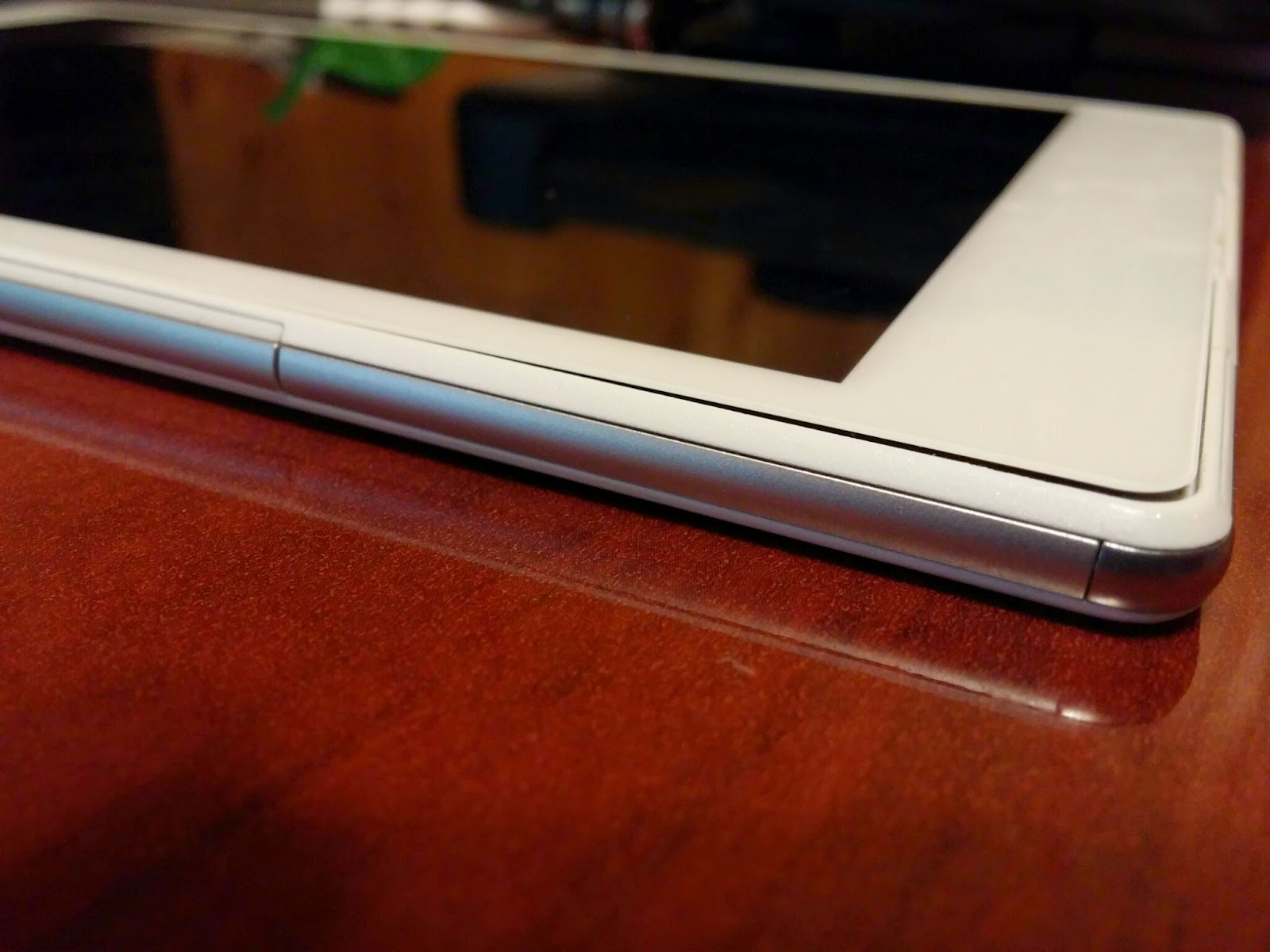 That's my guess - and this has led to a bit of a bend in the unit and now even the glass can separate ever so slightly.

There's no issue in using the device, whatsoever... except now you can't be sure of the IP rating.  As such I never subjected it to a submersion test.