Posted by Unknown on February 25, 2015
I have an Oppo N1 and a Find 7, so why did I want the N3? The main reason was that I missed the N1’s rotating camera. The quality of the front facing camera cannot be compared, especially in low light conditions. People love their selfies! 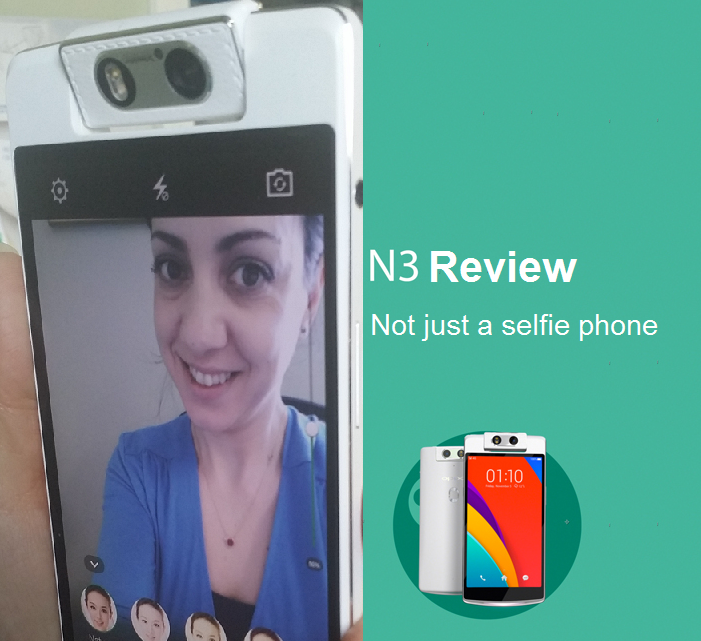 Most reviewers call the N3 the ultimate “selfie phone” and it is, but it is much more than just that. It is a beautiful and fun phone that includes many exciting features and cool extras: A rotating camera, an O-click remote, touch access, fingerprint unlock, maxxaudio, dual sim, the VOOC fast charger and more! That’s a pretty long list.

The N3 has a sleek polished look with a white matte polycarbonate back. The phone has a premium feel to it and feels good in my hand. The frame is made out of an industrial grade aluminum alloy which makes the phone very durable. The phone is shipped with a screen protector already applied. If you like screen protectors, it will save you some time and few dollars. The rotating camera has a white faux leather cover on it. I don’t mind it but some do and it does look a bit odd. The skyline notification light on the bottom is a nice touch.


Although people are used to this size by now, the N1 was ahead of its time with its 5.9” screen and people complained that it was too big. Oppo listened and made the N3 smaller and lighter with a 1080p 5.5” screen. The rotating camera adds bulk to the phone so it still seems like a phablet although it’s not officially in that category. I find the size perfect. It’s easy to hold and very ergonomic. The volume buttons are right where my thumb goes, and the touch access in the back in perfect reach of my index finger.

The earphone jack and charging port had to be moved the side of the phone because the rotating camera dominates the top of the phone and Oppo added a cool hollow frame design on the bottom. The earphone jack is on the top right and earphones which come with the phone have a curved plug to match that design choice. The charging port is placed on the bottom left. It is not very convenient especially when I place it in a car/bike mount. As a righty, plugging it in in that angle is a quite awkward. Yes, finally a design better for lefties.

The mono speaker is placed on the bottom of the device but thanks to the hollow frame design, it is not blocked when holding the phone. The sound is clear and loud thanks to the Maxxaudio technology.

The most remarkable feature of the N3 is the rotating camera featuring a Schneider Kreuznach lens. The rotating camera was first introduced with the release of the Oppo N1. The camera of the N3 is very similar except the fact that the N3’s is motorized and can rotate automatically. It can rotate 206 degrees and has been tested with over 100,000 rotations to ensure it will last. The camera can be rotated either manually or automatically using screen gestures, the O-click remote or the touch access. It works really well and always impresses my friends. Besides the high quality selfies, the rotating camera offers another exciting advantage: the Auto panorama. The controlled camera rotation in increments of 0.012 degree produces perfect panoramas. The only down side to the new automatic rotation is that the camera module does not lock in place like it did on the N1. 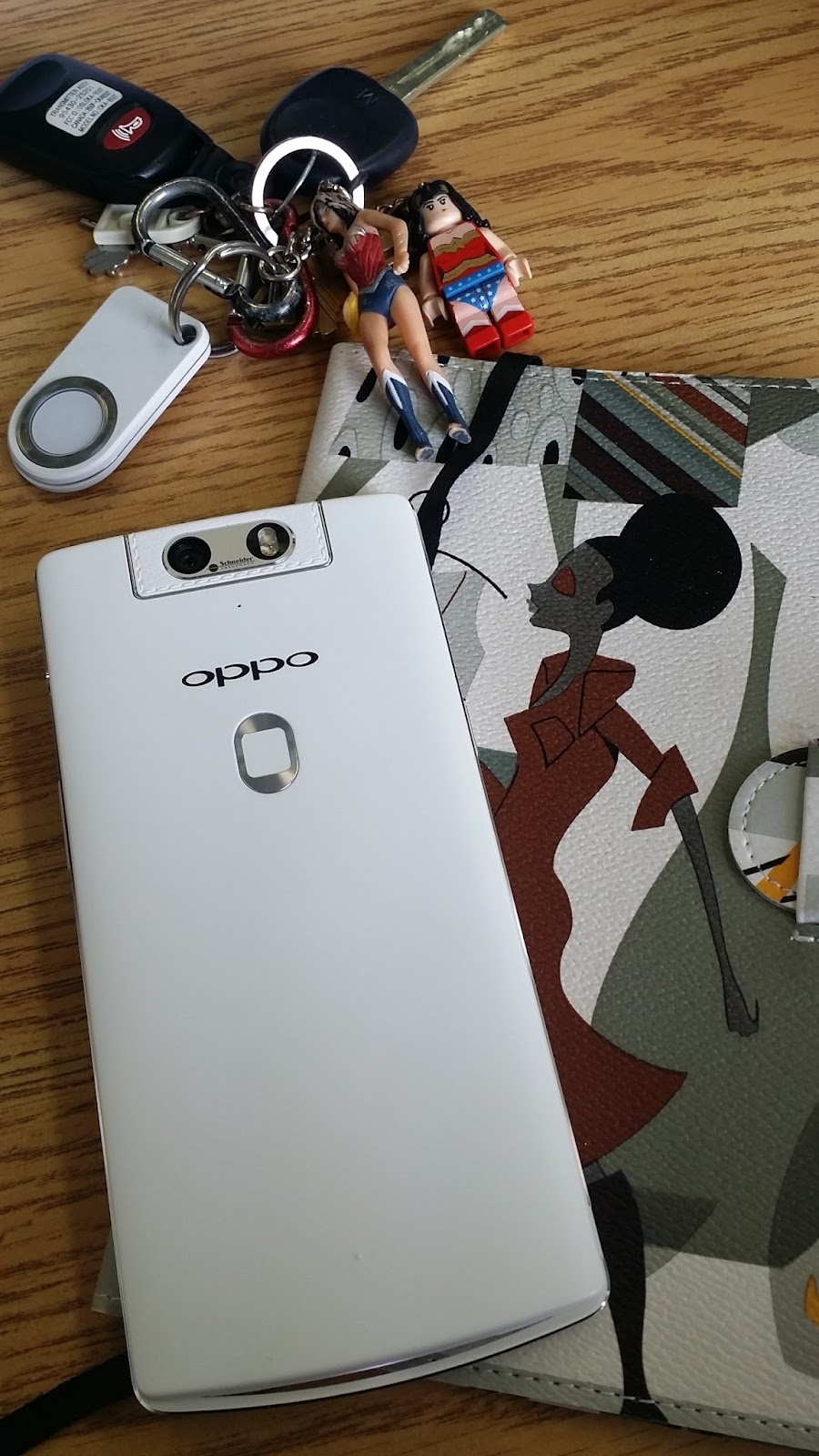 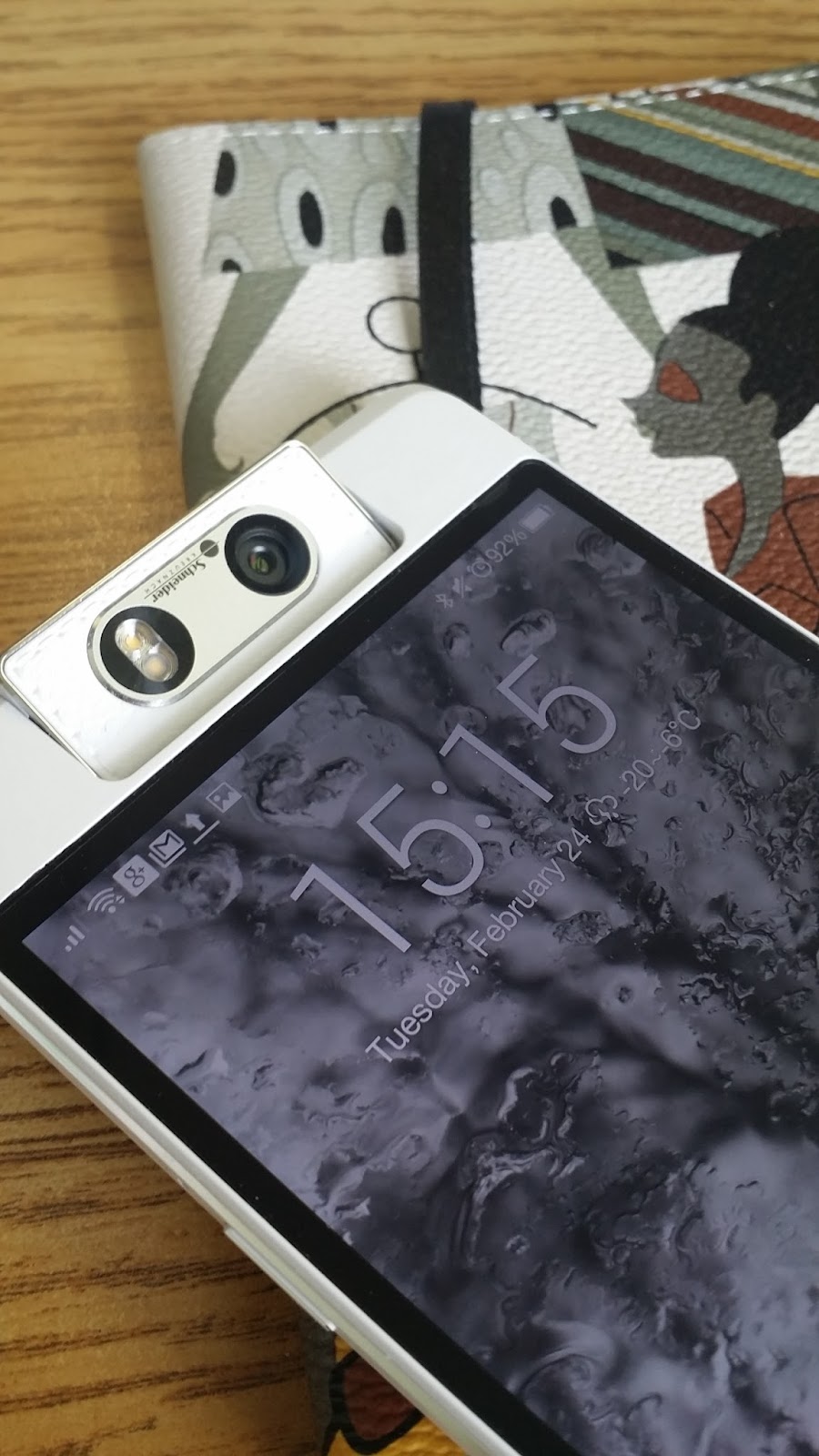 The camera app itself is excellent. It includes great features for any kind of photographer. Beautify filters for selfie takers and RAW, Expert Mode and auto Panorama for photography enthusiasts. The camera uses the Pure Image processing technology, the PI 2.0+ engine for Smart Scene Recognition, adjusting the white balance and for face recognition. The different modes come as downloadable add-on widgets which means that more can be added easily in the future. One missing feature is the slow shutter which was one of my favorites on the N1 and Find 7. I really hope that it will be added later on. 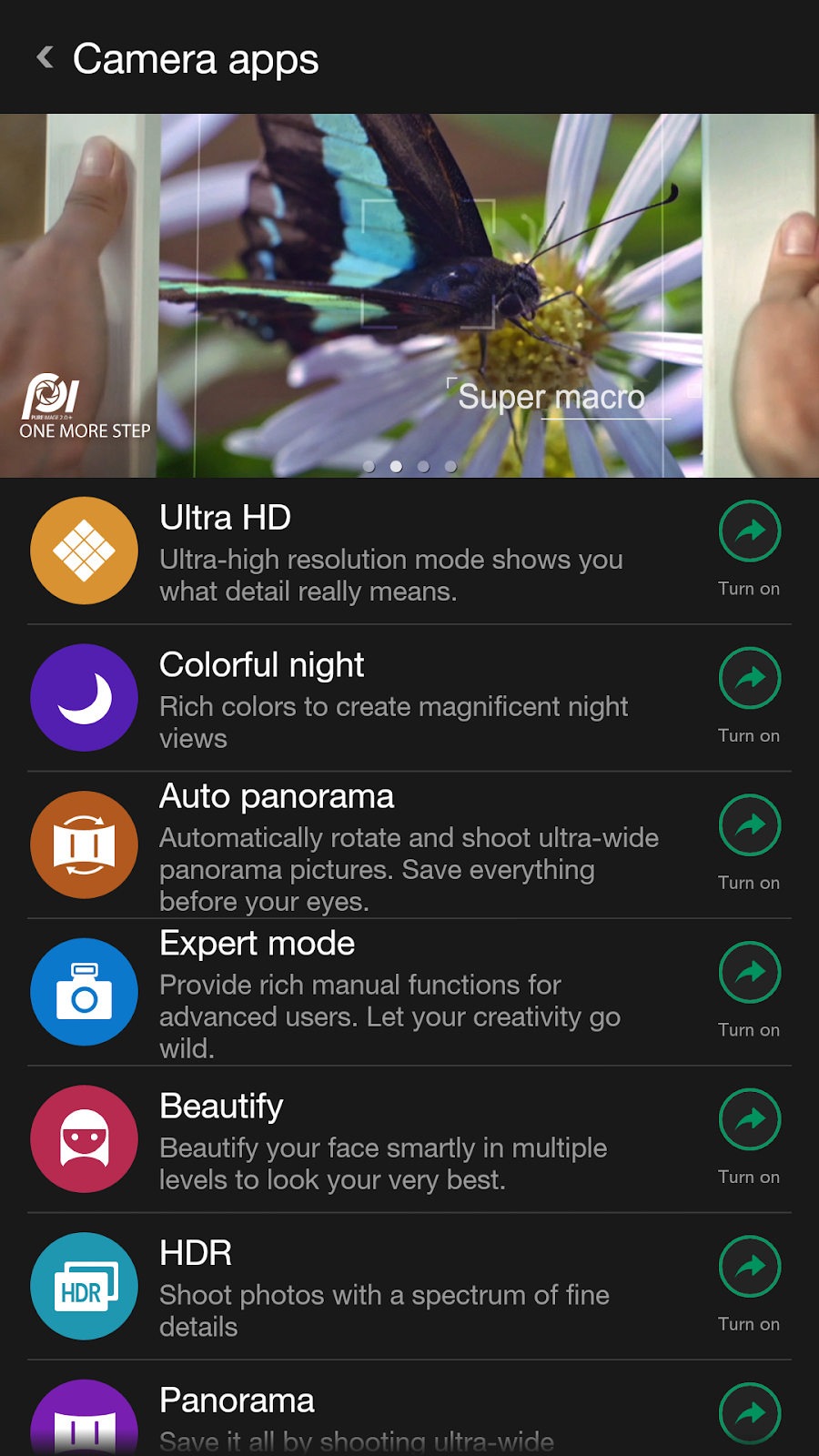 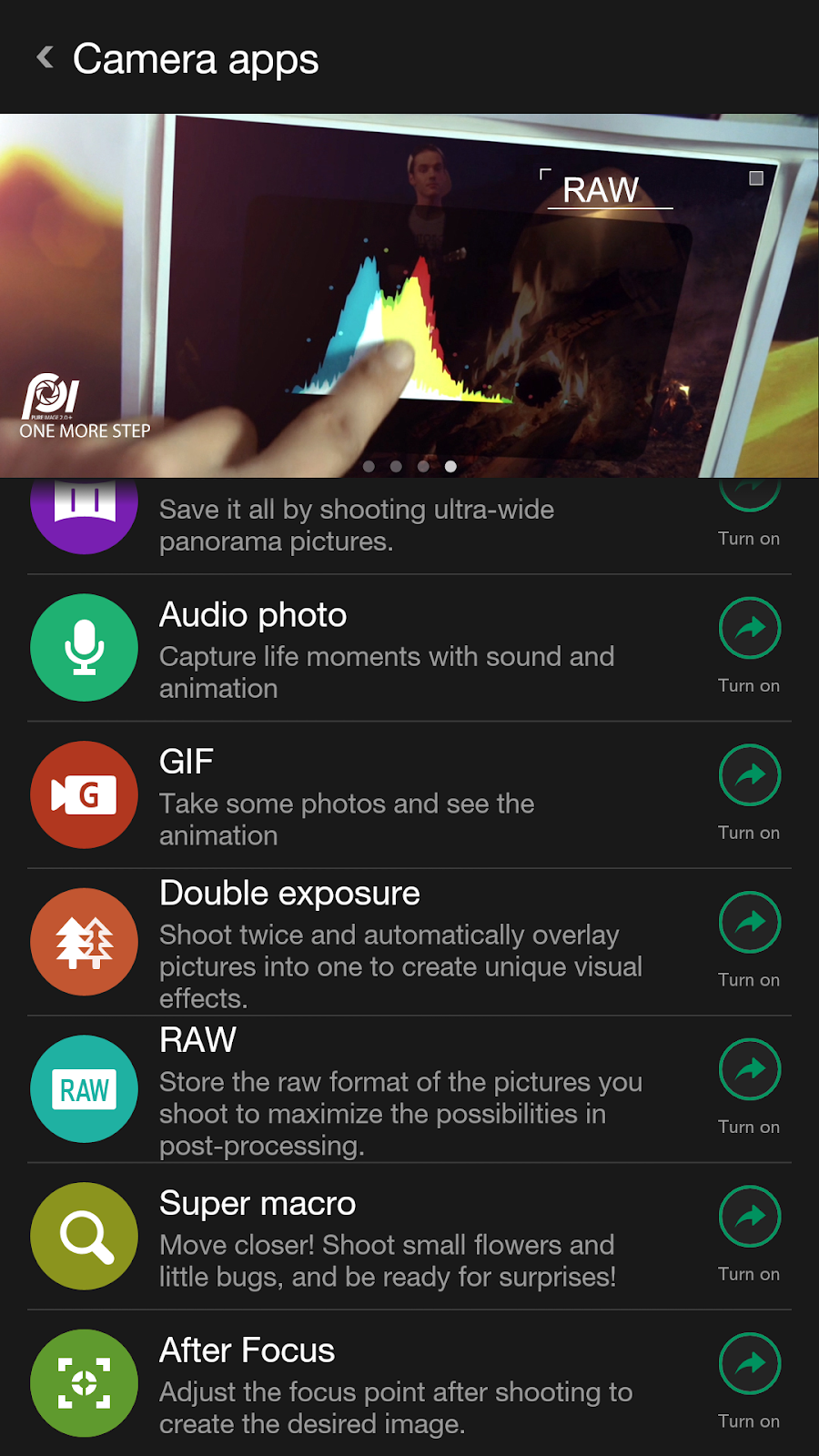 Some of the feature I love the most are:

Super Macro- The PI engine has a Super Zoom feature which allows getting really close to an object without losing fine details. Check out my photo of a snowflake. I’ll be running after insects as soon as the spring comes.

Ultra HD- Ultra HD was introduced when the Find7 came out. The N3 is able to take photos up to 64 Megapixels. It creates sharp photos with fine details but I recommend using a tripod for best results.

Beautify Mode 3.0: I am a huge fan of the Beautify feature on the Oppo phones, so are my girlfriends. It works extremely well and creates photoshopped-like selfies. Beautify Mode 3.0 adds seven different filter choices and the effect can be adjusted from 0-100%. 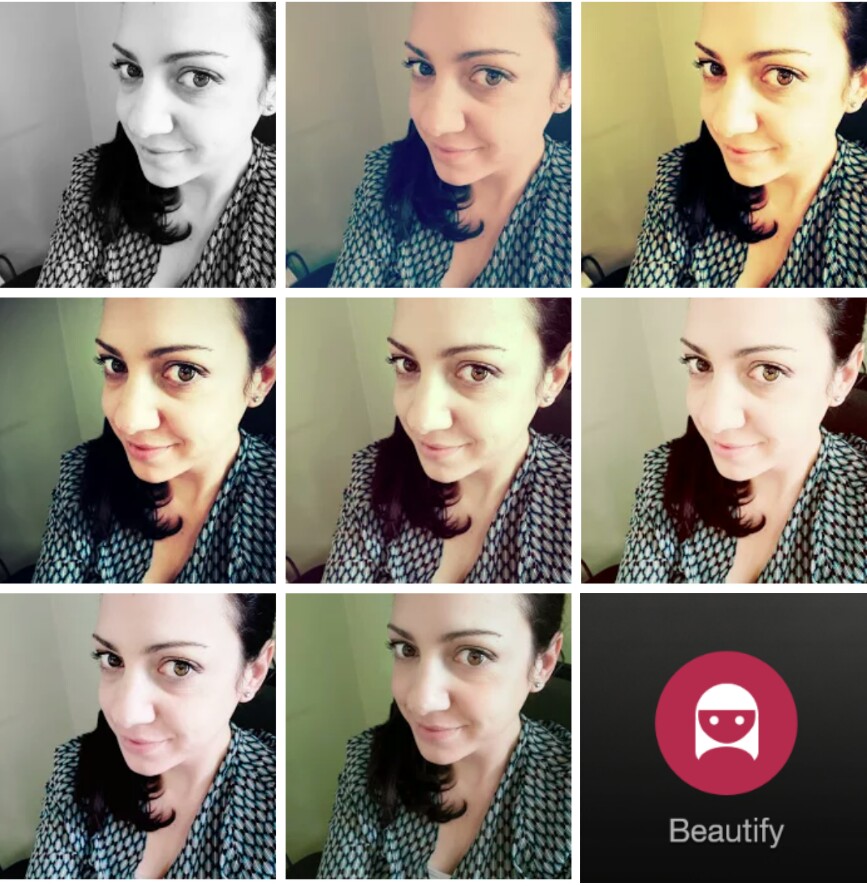 After focus -You can take a photo and set up the focus afterwords. It’s really neat.

More Features: Night mode, Auto and regular Panorama, HDR, Audio photo, and Gif. Then there is the Double Exposure mode for taking weird photos. I am still not sure what to do with that one. 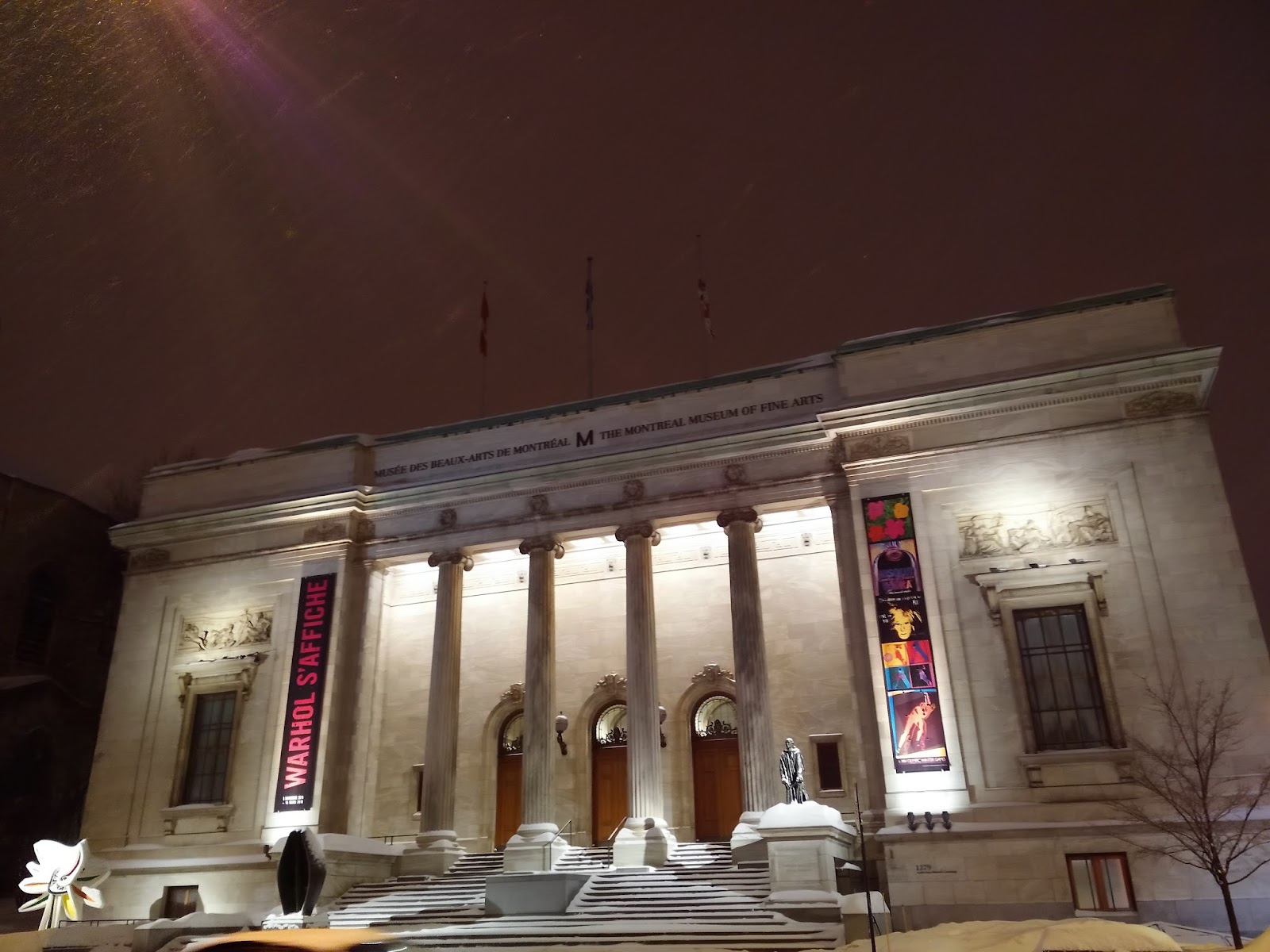 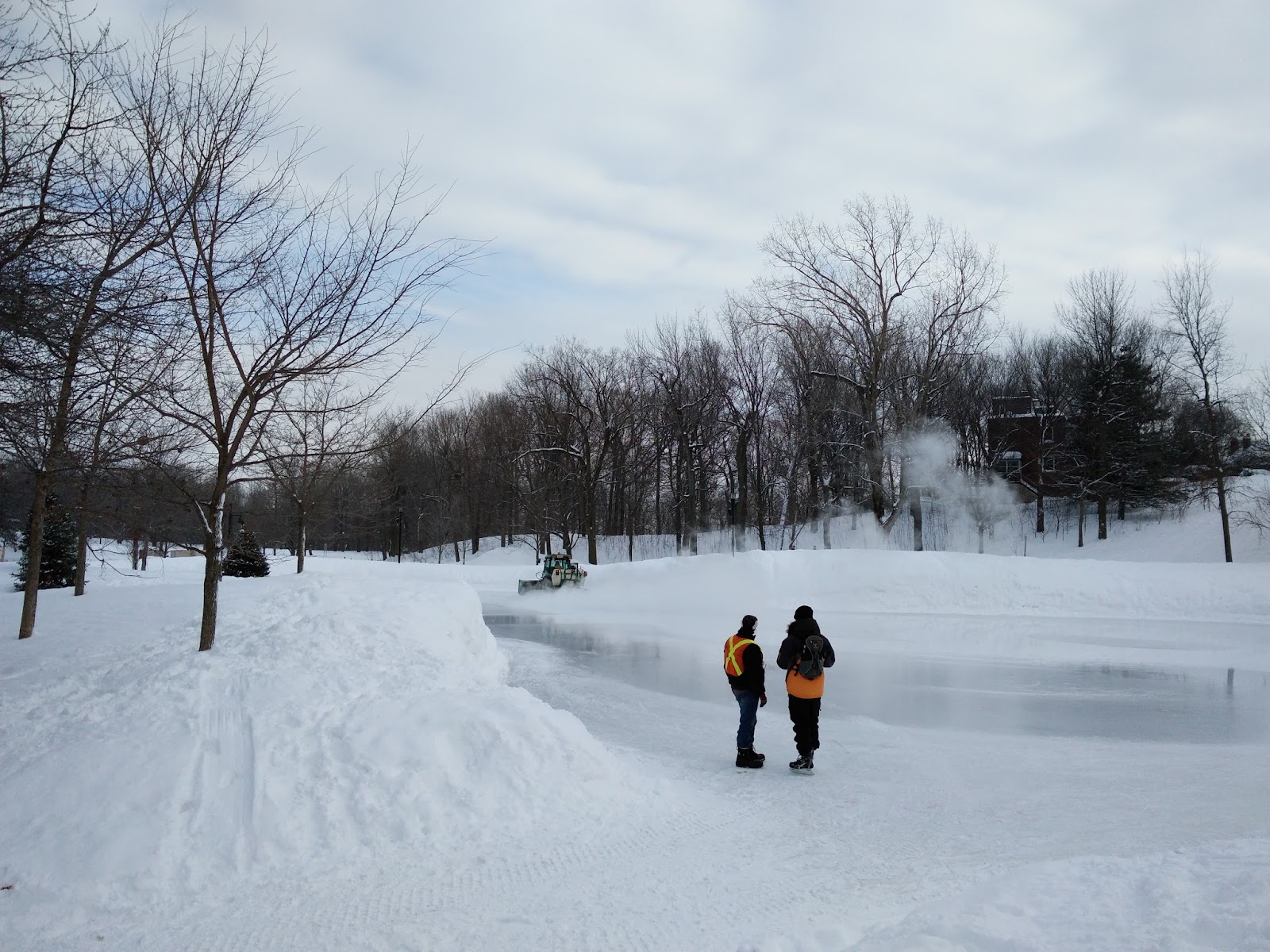 The N3 has 2GB of ram and a 2.3GHz Quad-core Snapdragon 801 processor. After using the Find 7 which has 3GB of ram, I noticed the difference. The phone doesn’t lag by any means, it’s just not as fast as the Find7. Overall it performs very well. I’m not a big gamer but when I do play with my children it’s a smooth experience. The 1080p screen is sharp and clear with good visibility in bright conditions outdoors.

The 3000 mAh Li-Po battery can not be replaced on the N3. The battery life is average, but it will definitely last a full day with normal use and 3-4 hours of screen time.
The VOOC charger can restore 75% of the battery in about 30 min which makes the battery life a non issue for me. A quick charge can extend the battery life by few hours.

Another fun feature of the N3 is the O-click remote. The remote was redesigned and it is now bigger than the old O-click which came with the N1, it’s also sturdier. The O-click can be used to control the camera or music on the phone, to locate the phone and can blink when there is a missed call or message. I use the O-click mainly to snap pictures but if I didn’t have an AndroidWear watch, I would probably use it to control the music at the gym as well.

The N3 is a dual-sim phone. In addition to the main Micro sim slot, there is another slot for a nano sim. This second slot can be also used for a Micro SD, expanding on the 32GB internal storage.

It is not something that is very common in North America so it is nice to have. It is going to be highly useful for me when traveling. I have a T-mobile sim for when I go to the states in order to save on roaming charges. With a dual Sim, I can still see my missed calls and get text messages from my main phone number while using the US sim for data and making calls.

The operating system on the N3 is ColorOS based on Android 4.4.4. ColorOS was criticized in the past for not having Unified storage and only allowing a small partition for app installation. That was addressed by Oppo and the N3 was released with unified storage. It is not clear if Oppo is working on a lollipop update, something which bothers some users. At the same time, updates to ColorOS are timely with fast bug fixes.

ColorOS is not everyone’s cup of tea but I really love it. It offers great features like a theme app with free themes, guest mode, double tap to wake, gestures, a backup app and one hand operation mode. The launcher features a single layer design which means that there is no app drawer. I was not sure if I would like that, but it makes a lot of sense and works for me. The launcher can be replaced if you miss the app drawer.

I particularly like the screen-off gestures like the double tap to wake the screen. I also love the screen-on gestures, especially the 3 finger swipe gesture for screenshots. For some reason the air gesture feature was removed in the last update. I hope that it will be added back.

I would recommend the N3 mainly to anyone who wants a great phone with a good camera, especially social media users who enjoy taking high quality selfies and other photos. The N3 is an impressive phone that will wow your friends with its rotating camera, o-click remote and the touch access on the back.

It can be purchased from Oppostyle.com for USD $649 with Free International Express Shipping. It’s not cheap but considering it has a dual sim, a fast charger, the rotating camera and an SD card slot, I think it’s worth it.