Posted by Ryan Moore on February 21, 2015
Hey everybody this is a submitted app review by +Rob Blaich (you know, the guy who designed our new logo).  It's a very full review, and the TL;DR is all the way at the bottom, but it's totally worth the read!

There are too many texting/messaging apps. Let's just use this one.

The amount of apps which allow you to text via SMS or data has become overwhelming. Nearly everyone has a smartphone, yet outside of SMS, email, and phone calls, no one can reach each other because we're all on different chat networks. Some are on WhatsApp. Others use Hangouts. BBM, Viber, TextSecure, Facebook Messenger, IM+, Line, Skype, Tango, KakaoTalk, WeChat, Razor Comms, Voxer, Kik, iMessage, Snapchat, ICQ... Get the picture?


I cannot say I have tried out all of these apps, but a good chunk of them. BBM was my messenger of choice, not only because of nostalgia, but because it has a lot of features, and now works on all platforms (except Windows Phone). Alas, my contacts on BBM was dying out as time passed, and BBM wasn't improving much. It would choke out on my wife's iPhone 5s, and continued to look ugly on Android. Plus, it always drove me nuts that I couldn't use my tablet or desktop to chat to others through BBM. At least I could do that much with SMS thanks to PushBullet, AirDroid, and/or MightyText.

Then Telegram gained my attention after PushBullet received its recent update, allowing more compatibility with this app (along with Hangouts and others).

I decided it was time to explore again. I rallied up some friends through Hangouts who I'd hoped would at least try this out with me. One can understand it is pretty difficult to demo a chat app, when there's no one to chat with.

Sure enough, after about half a day, I had at least 4 people with me in Telegram. Now, a week later, I have 11. The party is growing.


When users sign up, they're asked for a phone number. This is the only info you provide to Telegram to create an account. Telegram will SMS a code to you and using that code, your account is created. For every device from there on, the code is sent via Telegram to the device (or devices) that have it already. Easy as pie!

You're asked if you'd like to setup a username. If you don't want anyone to be able to find and contact you, leave this blank. I, however, would love for people outside my contact list to reach me, and vice versa. Now I can share my username with anyone and they can chat with me. There is even a method of sharing your username via a link, such as http://telegram.me/YourUsernameHere.

Security for the paranoid


Telegram was created right after WhatsApp was bought by Facebook. Many paranoid users out there ran for the hills, leaving their friends behind. People thought the app would go downhill, and wouldn't be as secure anymore.

Along came some developers and created Telegram. To paraphrase; They believe their app is so secure, they've said they'd give $300,000 to anyone who hack the system! That's confidence.

I've also read that, Telegram is "pissing off the NSA and the GHQ." For you and I, this is probably a good thing, because nobody likes a nosey nelly.

Telegram allows you to not only chat among each other, but you can do "Secret Chats" as well. This means that any chat you have in secret, does not remain in the cloud, and is only seen the devices the chat exists on. So if you're like me and put Telegram on your phone, tablet, and desktop, but start a secret chat on your phone, it won't show on the other devices. Also, it prevents one from forwarding messages, and deleting a chat is permanent.

As I hinted earlier, Telegram is one of the few messaging apps out there that is both cross-platform, and works on multiple devices. Trust me, this combination is a little harder to come by than you may think.

Telegram works on Android, iOS, Windows Phone, and BlackBerry. BlackBerry users have the stipulation of being on at least BB10, and they're encouraged to install the Android app. I hear it works very well.

I have a habit of coming home from work, and putting my phone aside due to the battery being down, and using my tablet for the night. A pet peeve is getting a BBM message, and having to go get my phone to respond. Telegram works in perfect sync with my Android tablet, as it does for my wife's iPad/iPhone combo.

You can also use Telegram on the desktop, either via their web app - which I use at work and have no qualms with - or, by installing their desktop apps for Windows, Mac, and Linux. I have an iMac at home and installed the Telegram app from the App Store. It works extremely well. I was pleased to see I could just drag-and-drop files into a conversation to send them. Nice touch!


I don't normally have to send files to family and friends, but to have the option there is important. Just about all the messaging apps I've mentioned earlier will let you send a photo or video to a contact. Telegram will let you send anything you want, such as a Word Doc, PDF, PNG, EPS, AI, MP3, etc. Not only that, you can send a file up to 1.5GB in size! Would any of us do this? Not likely, but again, the option is there. 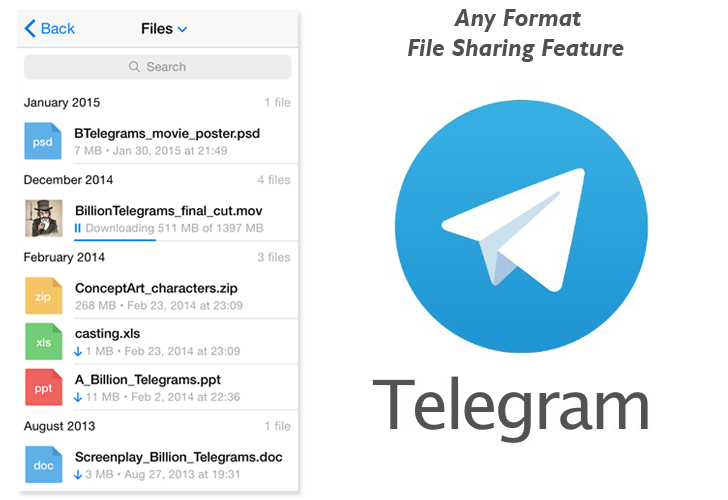 When you do send files back and forth, the app will keep your files collected together per contact, keeping things neat and tidy.

The only fault I found was for iOS users. One friend of mine sent an .MP3 to one of her friends who has an iPhone 6. She could not save or move the file such that she could use it as a ringtone. I can only speculate, but I believe this is more-so to do with iOS and how it doesn't really have a file structure like Android. She was able to play the MP3 from within the app.

A fun feature I noted was being able to send GIF or JPG, right from the web. When sending a photo, an option to Search for GIF is there. I looked up a meme, found one, and sent it right to one of my contacts. I didn't have to go to my browser, search, save the pic, go back to Telegram, and go through the steps again. Awesome!


It sounded silly to me when I read it, but I saw on Telegram's site, as well as other sites speaking of the app, that the experience is fast.

Well it most certainly is.

Not only does this app open and navigate between its screens with blazing speed, but the sending of a text is near-instant. I don't mean most of the time either. For the week I've been using this, texts having been flying out from my devices fast and consistently among all 11 contacts. These contacts range from all over Canada to one long distance in India.

GIFs and JPGs also reach their destination is nearly half the time I've seen through BBM, and most certainly faster than MMS. Hangouts can be quick too, but not quite up to this speed.

There is so much more...


Alongside the above features mentioned, Telegram has quite a few other features, even if they're a little more common.

You can see who's Online at any point. When you send a text, you'll get one checkmark showing it's been sent. When your contact reads it, another checkmark will show. "Name is typing" will show up when they're writing back to you.

If you're on Android, each contact can have their own notification sound and LED light (if you device comes with a notification LED). I noted the iOS version doesn't have this, which I again chalked up to iOS's restrictions. I can't comment on the Windows Phone version. 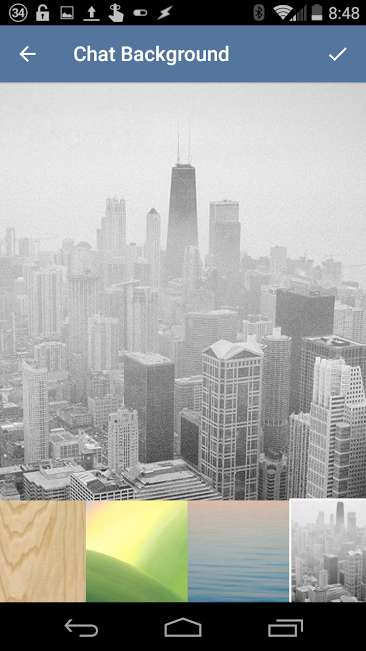 If you like to personalize a bit more, you can change the background of your chat windows to a variety of images. Mine has a nice landscape. My wife has hers set to something pink and girly.

Forwarding something someone has said from one conversation to another is easy. Just select the text, link, or image to highlight it. Then, select forward. You will be prompted to select another contact or group to share with. So for that great link someone sent you, you can easily forward it on to your other contacts. There is one stipulation - this won't work if you're in a secret chat.

If you happen to have a contact in your list that someone else does not, you can share people's contact info right in the chat to make it as easy as a tap on the screen to add them. This works for anyone who has setup a username in their profile, which makes their profile public.

Annoy your friends, family, and coworkers to join you. It's a better experience for all!