The Nexus 9 - in all it's square-y goodness 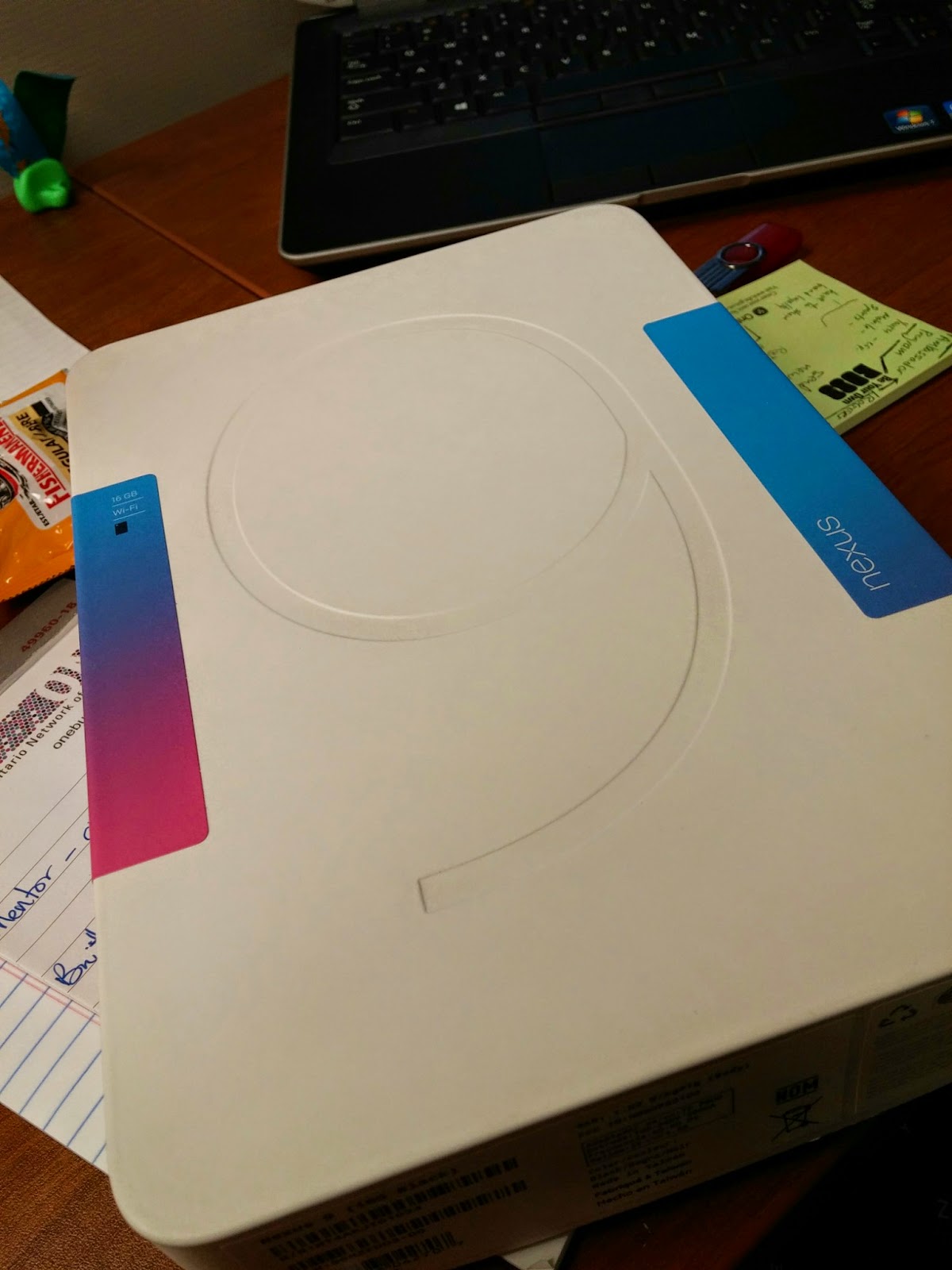 For over a year now my daily driver has been a non-Nexus device.  There's definitely something you miss when you're not on a Nexus, aside form usually 'on the day' updates' there's the fact that new Lollipop is such a new look for Android.  Usually on non-Nexus an update doesn't really change much visually for you, just some of the back end stuff (and there's a lot of debate about whether it's needed or not).  For me I love being able to be on the latest and have the new look; even if I might mod and theme it out of view after. 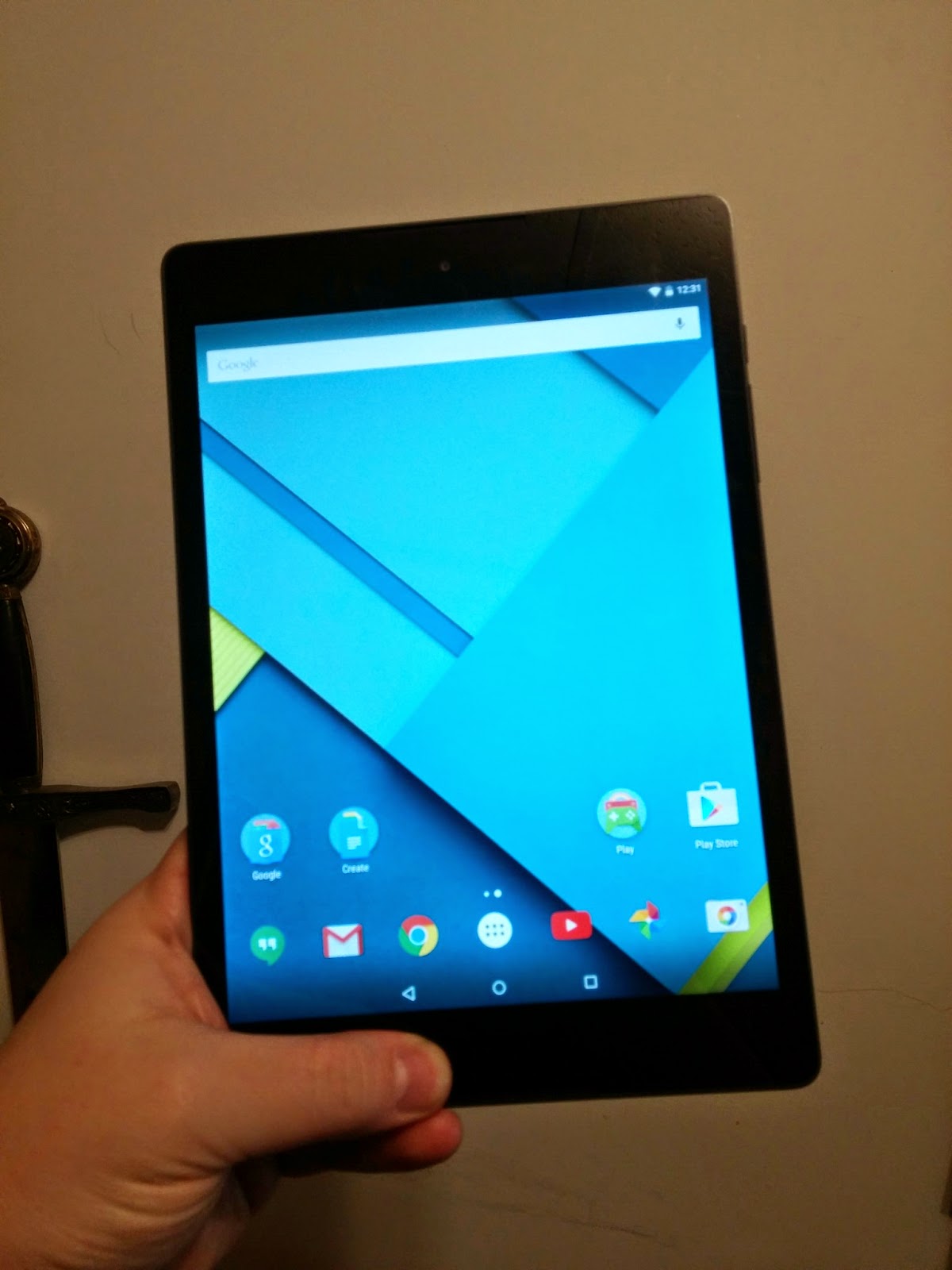 So getting a chance to play with a Nexus was something I looked forward to, plus... there's been a decline in my (and apparently others') use of tablets.  My own Note 8 sits by my computer with little usage and my TF101 has been relegated to my son, who barely touches it as he prefers his phone.  So, getting a chance to play with a new tablet, in a new form factor, intrigue me.  There was a lot of 'the Nexus 9 is just an iPad clone', so I wanted to see for myself.

Let's start this off with my video coverage... it might save you reading the rest (but I really hope you do read the rest and comment).

The Nexus 9 is the not the first HTC tablet, but it's the first in a long time, it's been about the same length of time since HTC was a part of the Nexus family so it comes with a lot of anticipation. 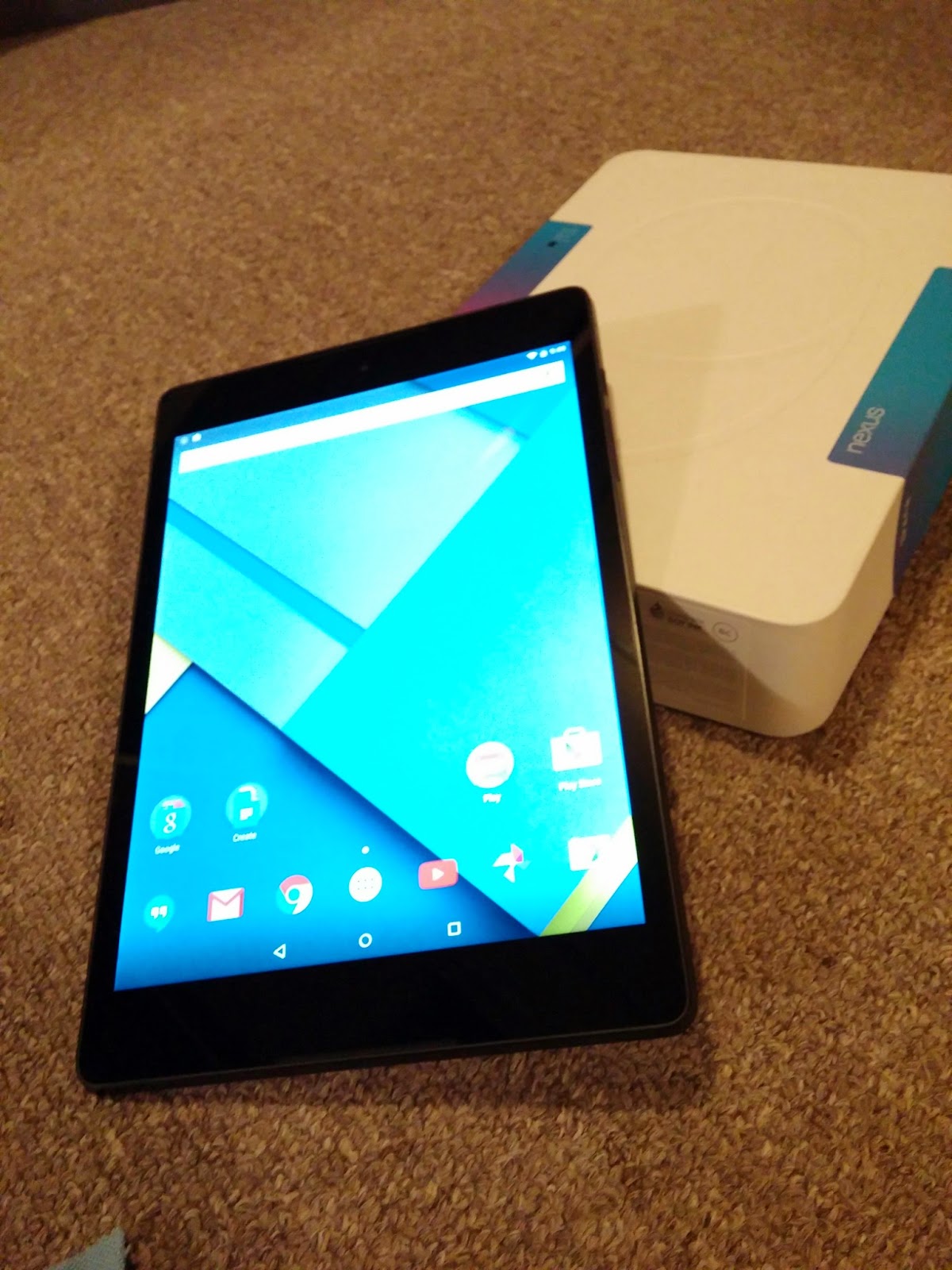 And here it is in all of its glory

Physical Aspects
When we get the device out of the case it looks square-ish.  Why that is, I don't know.  to me I think that Google was just looking to be able to say "hey look at us we have all sorts of new things" with their Nexus lineup.

The 4:3 factor does make it seem easier to pick up and use at any side and not have much difference.  But I'll get into that more later.

The device has some heft, but definitely not much more than say my Note 8, so for its size it's fairly light.  The backing is pretty rubbery, which can mean that it'll get a fair amount of grease on it.

In typical HTC fashion the power and volume buttons are on the same side.  This makes hitting the screenshot a little difficult; but then if you use the keyboard case it allows you to rest it on the one side without the buttons interfering. 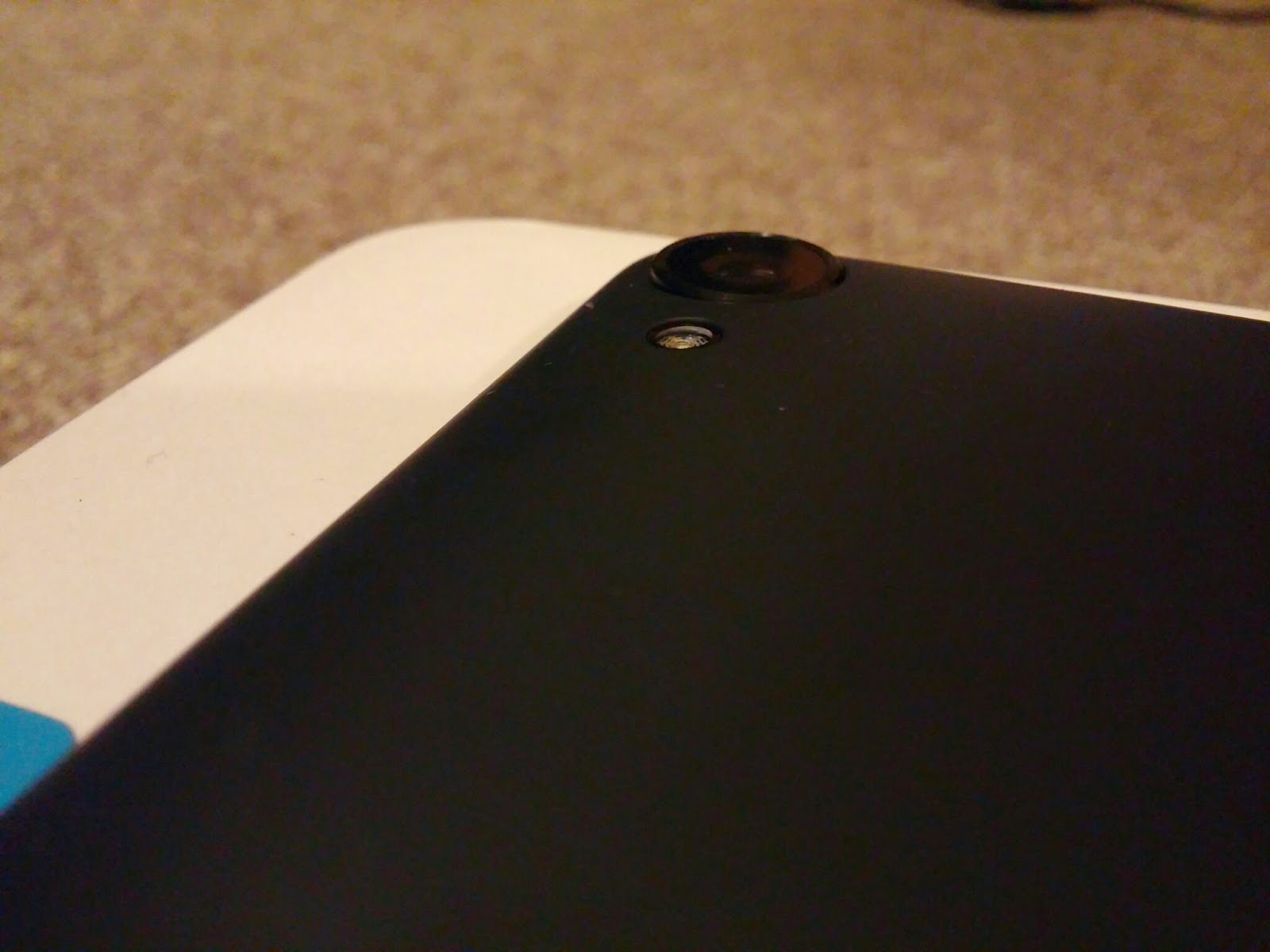 The forward facing camera is dead centred and the camera on the back is on the upmost left corner.  With slight curve at the lip of the back this means the camera lens is slightly protruding in the corner.  It doesn't stand out, just the edge of it.

There is a fair amount of bezel on the device, which allows you to hold it more like a book and not have to worry about palming or holding with with light fingers.

Also, on the front of the device you'll notice 2 speakers, top and bottom.  Unlike the Moto X, but like the Nexus 6, these are stereo speakers.  More on that later.

Sound - BOOM... in your face.  It is a real nice sound.  At low volumes it's not much difference than others out there, but as you increase it can really tell that there's quality there - and loud. 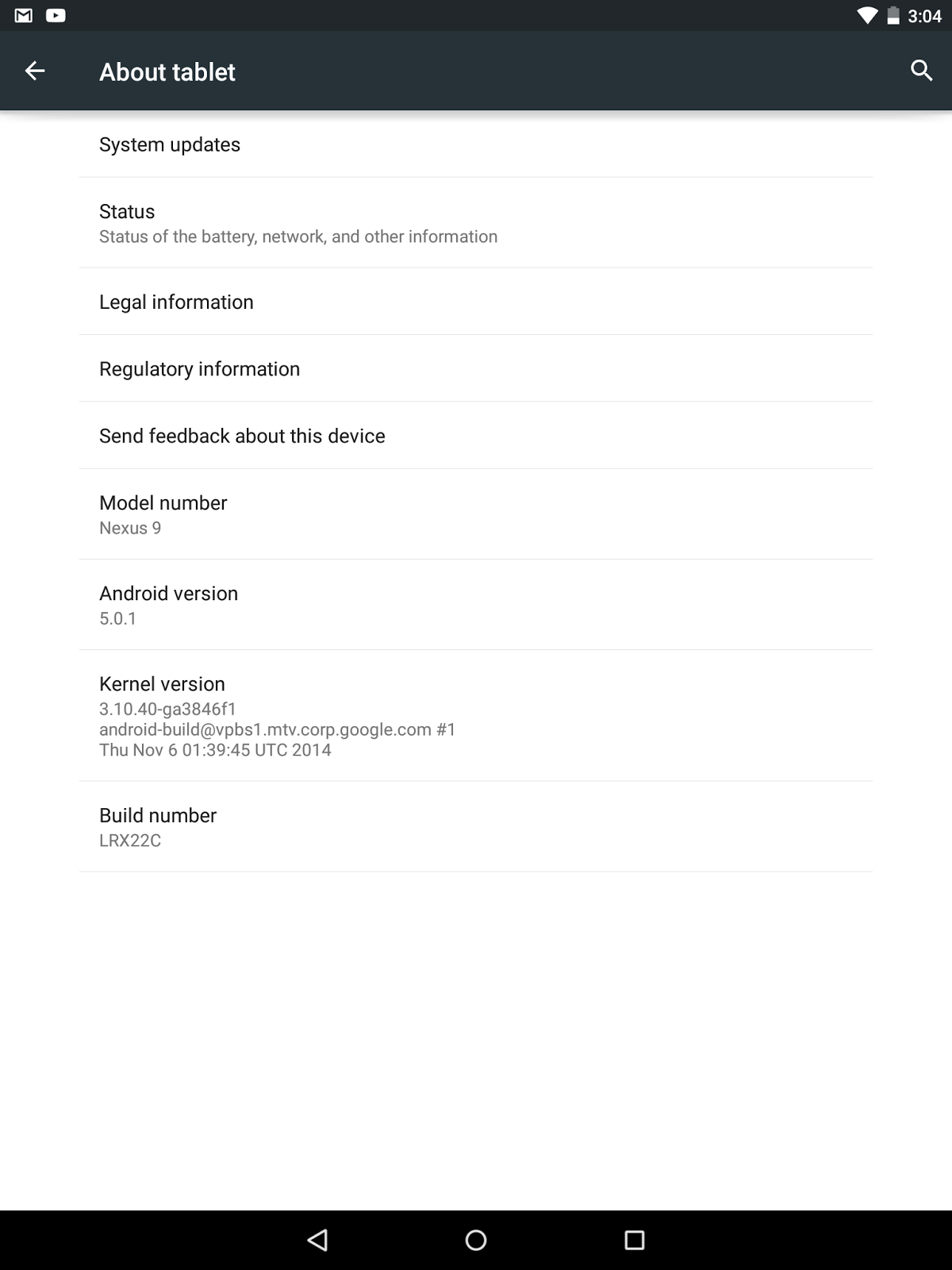 Software
Lollipop in its native environment!

There've been countless articles about what is Lollipop and how Material Design works, so I won't go on and bore you with that, but do know that this is operating on a device made for it.  Whether that, or it's the 64bit architecture this device just flies through everything.  The animations are amazing and fluid.

Outside of that, there's not a lot to it software wise ... I mean, hey, it's a Nexus.  No extra bloat, just everything Google has shown us operating at it's optimum peak capacity.

Camera
Do I need to talk about the camera for a tablet.  It's not bad, it's not great. 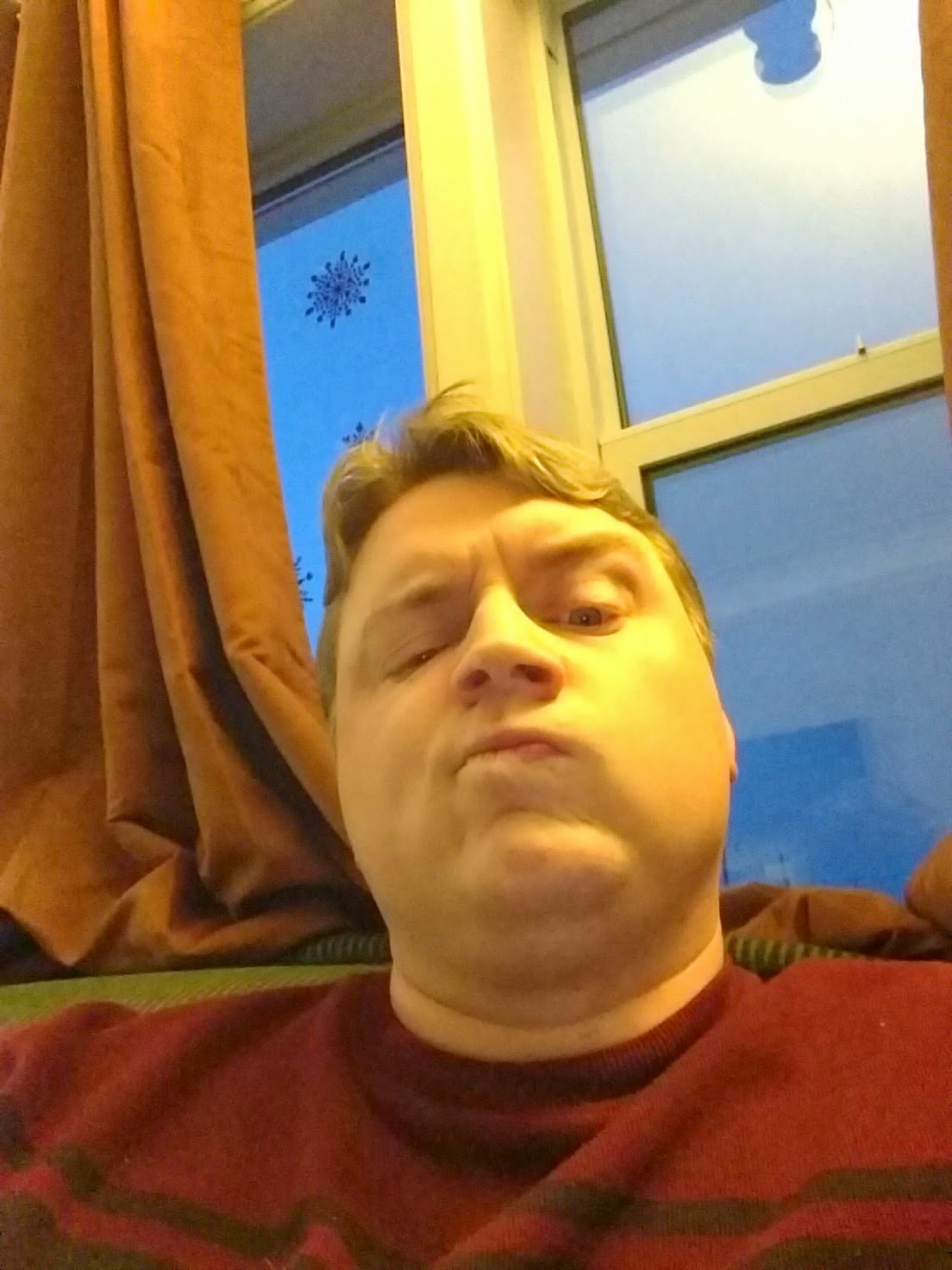 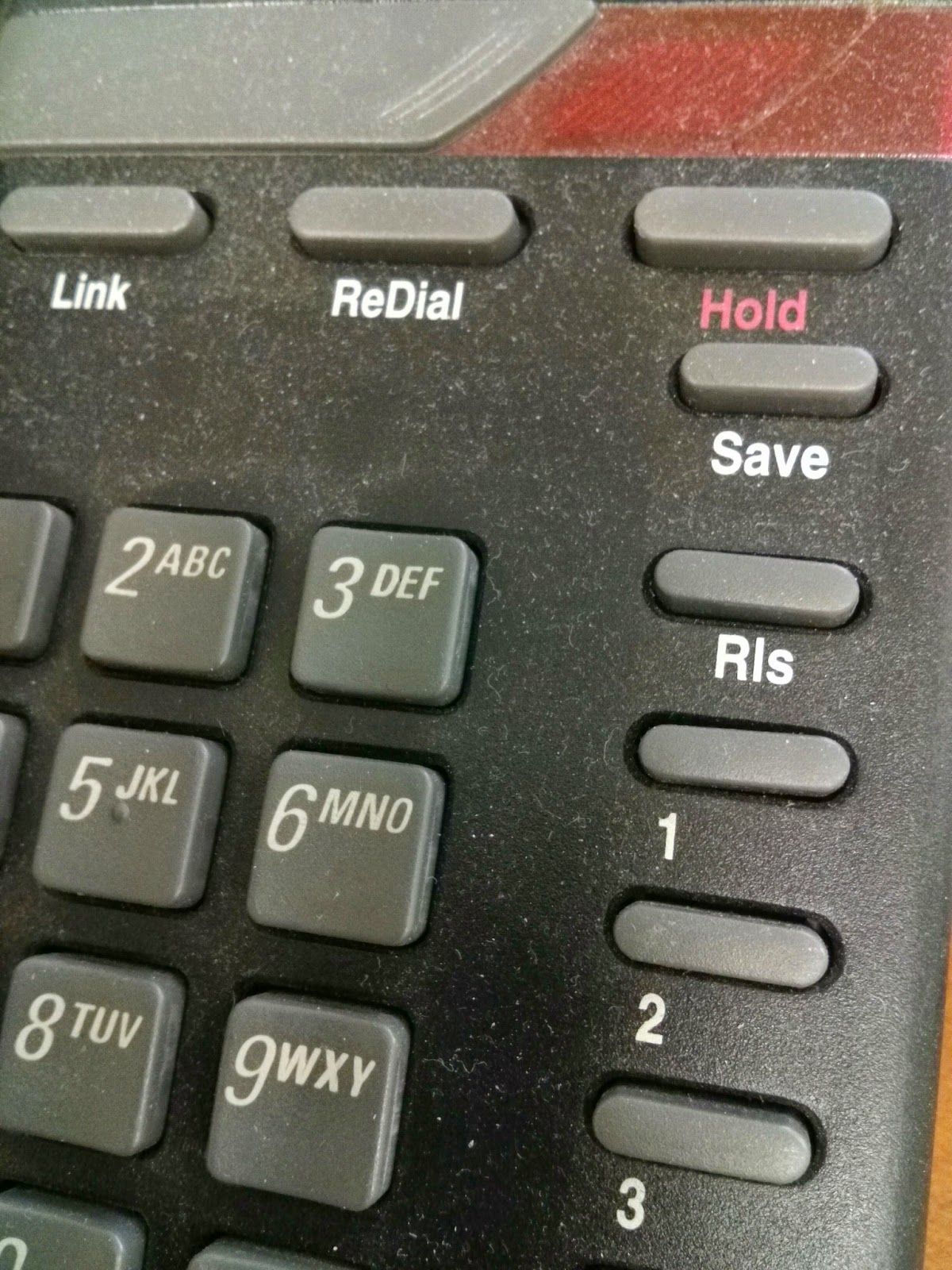 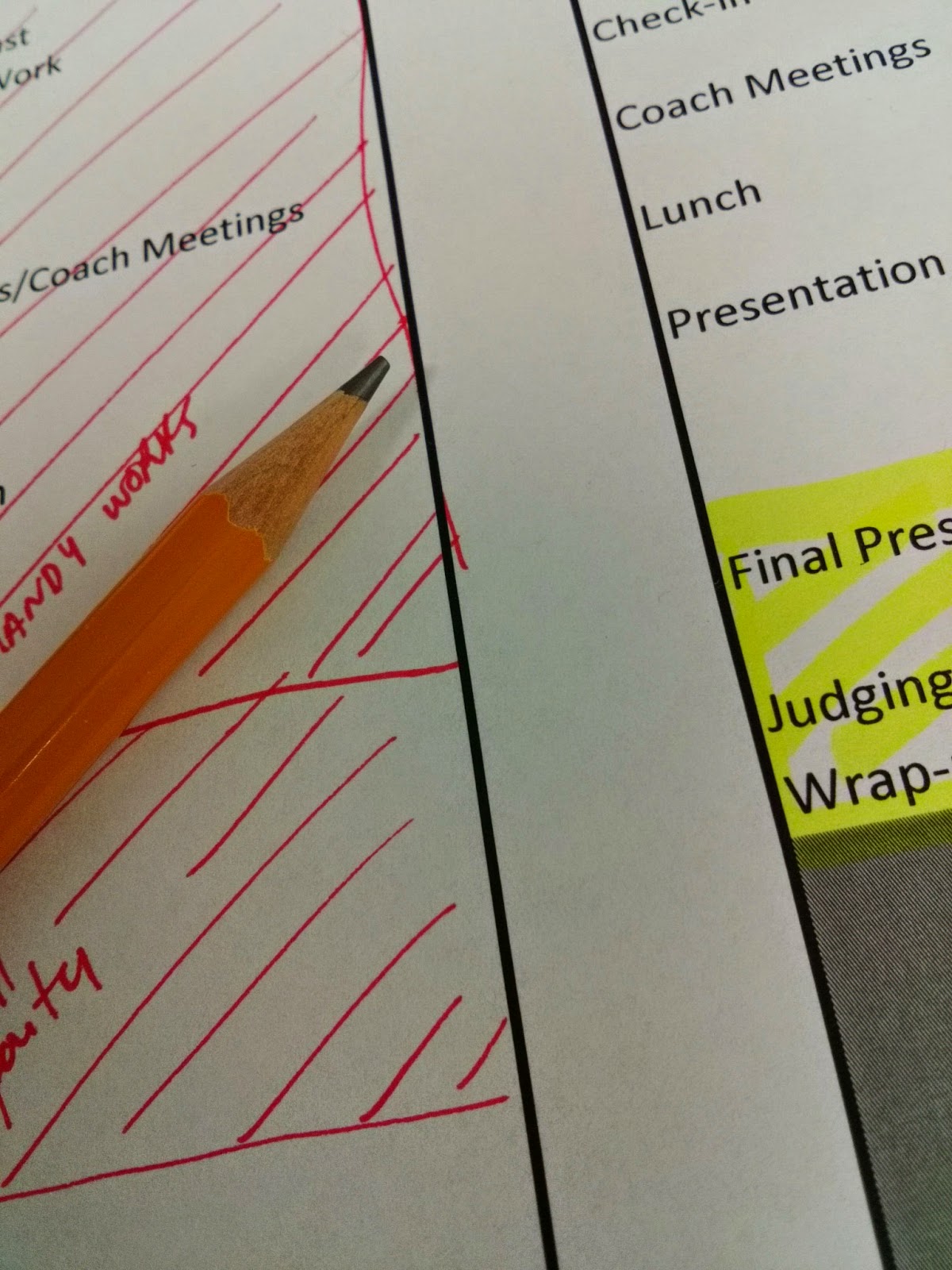 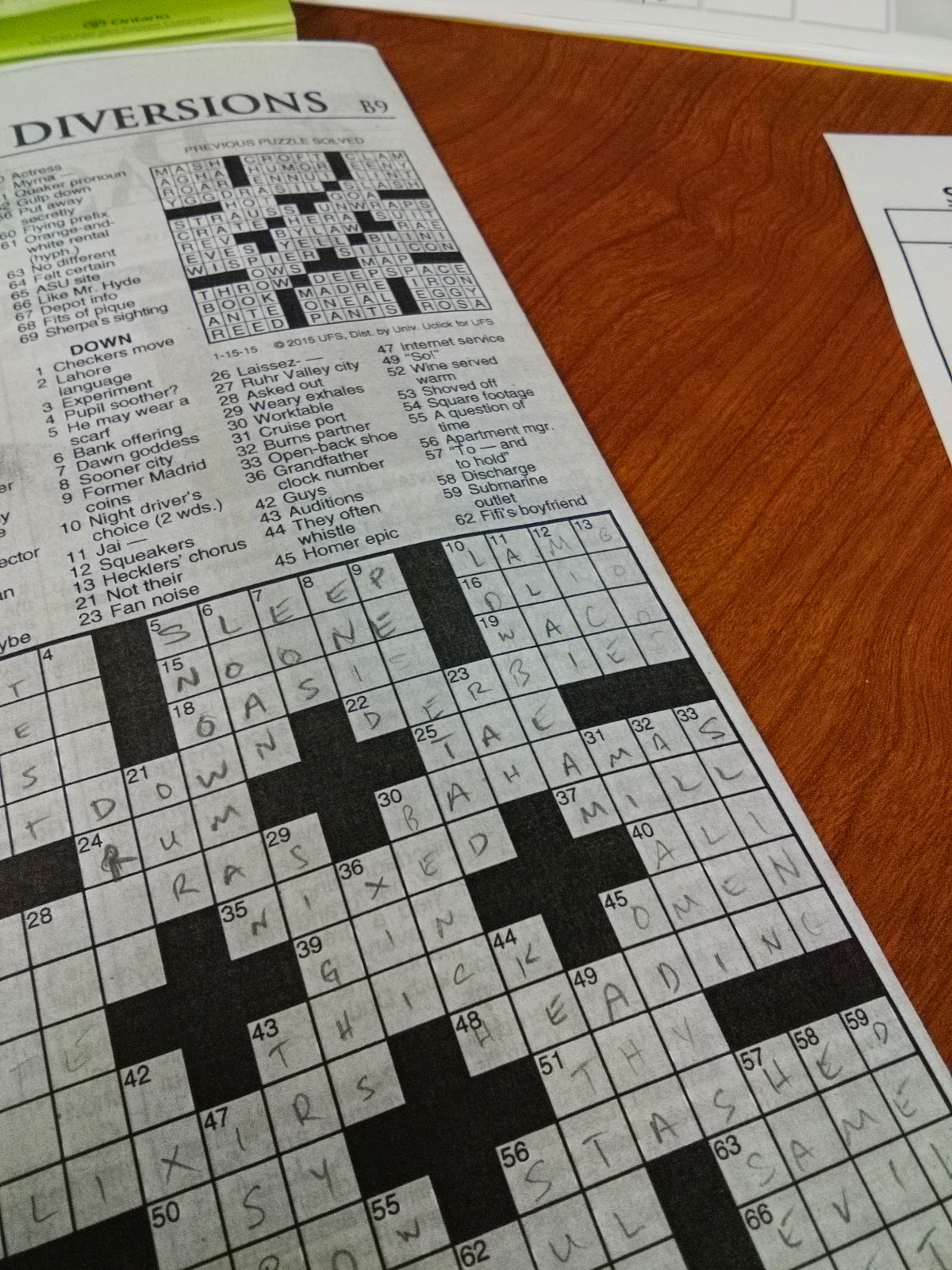 Usage / Performance
This device hums along just fine.  I haven't had any issue thus far.  No random reboots... nothing.

There have been some games that I've installed from Humble Bundle that wouldn't load or work, but I don't know if that's an issue with Humble Bundle, the 64bit processor (though I don't know why that might be an issue, just grasping at straws here) or the 4:3 screen. 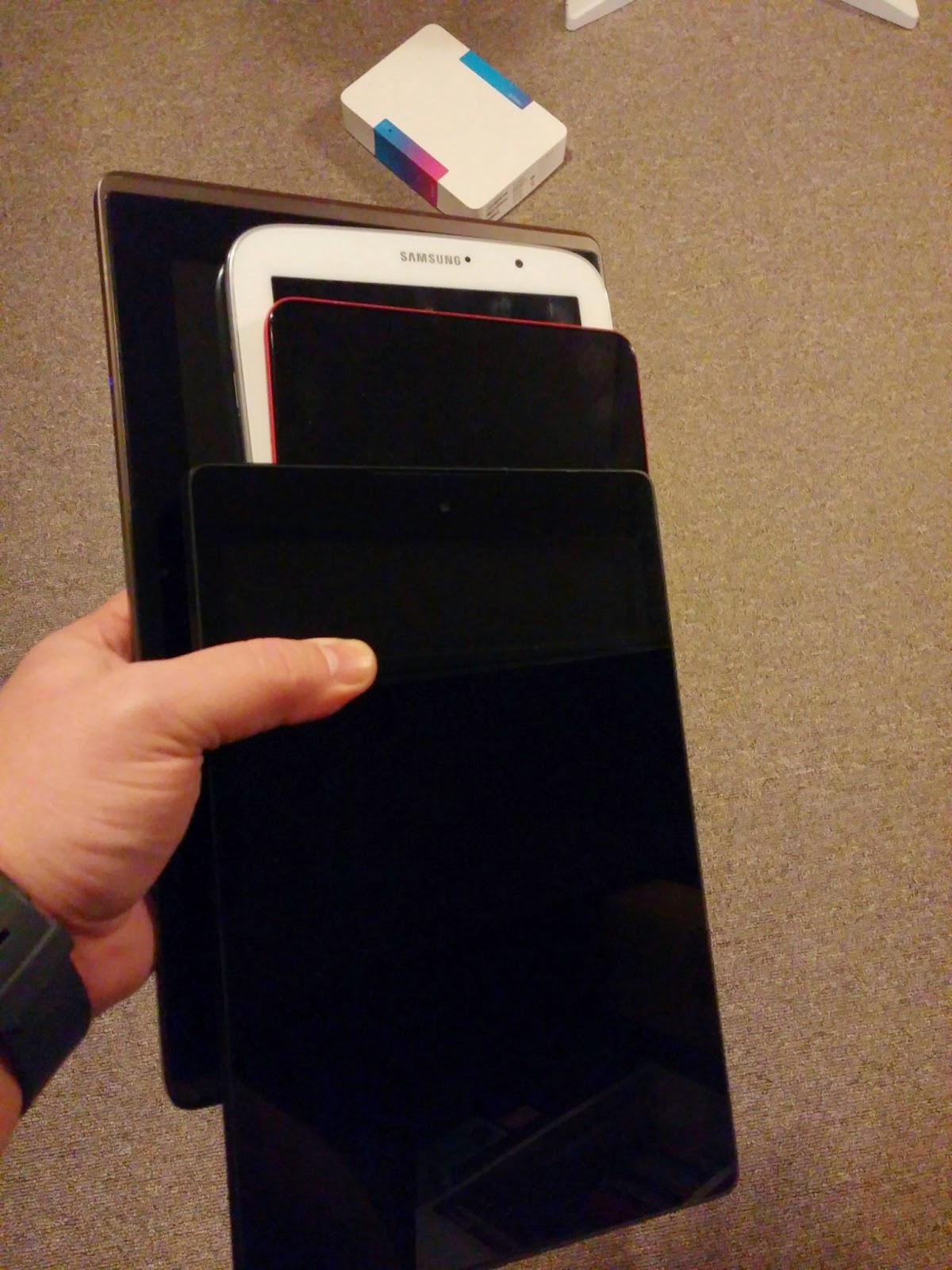 Battery has been amazing - miles better than anything else, but it's also a pretty huge battery.  There haven't been many devices out there that are bigger batteries, and most were a larger device too. 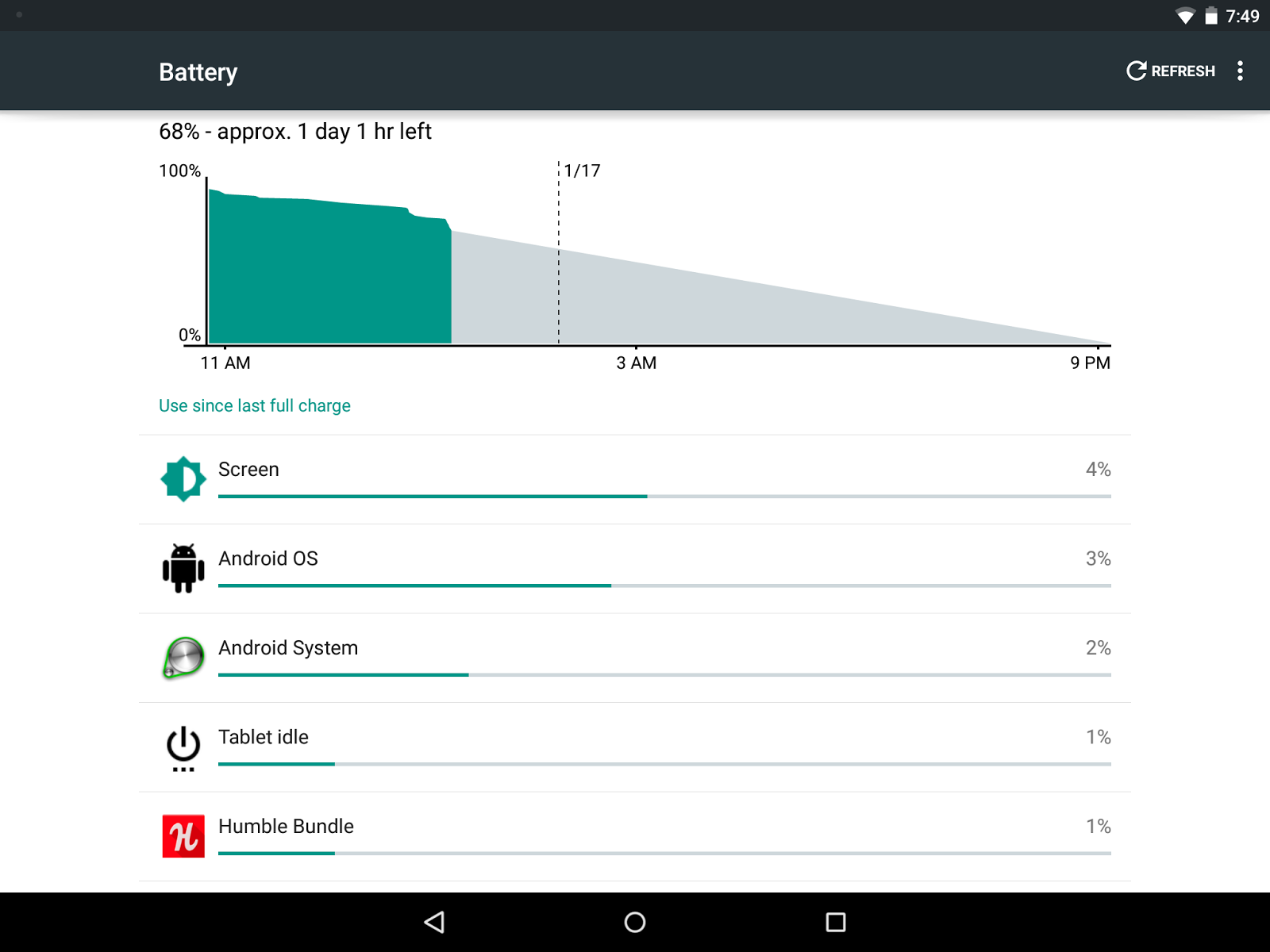 Miscellanea
Over the usage of the Nexus I noticed a couple of smaller issues pop up.  These weren't any crucial items, but something definitely worth noting.

Heat up issue - after some moderate usage, the back of the device up by the camera would really heat up quickly.  Nothing that would melt anything, or something that'd cause me some concern, just odd.  And whether it was a heavy 3D game or some browsing it would heat up the same.

Light bleed - as I tended to use this as a reading device here and there I would notice that whenever I wasn't looking directly at it (i.e. it lay flat on the table and I was sitting and looking down at it) that there would be a line of light bleed from the top.  If it was a white display, wouldn't notice, if it was black it wasn't so bad, but if it was somewhere in between you could easily see it. 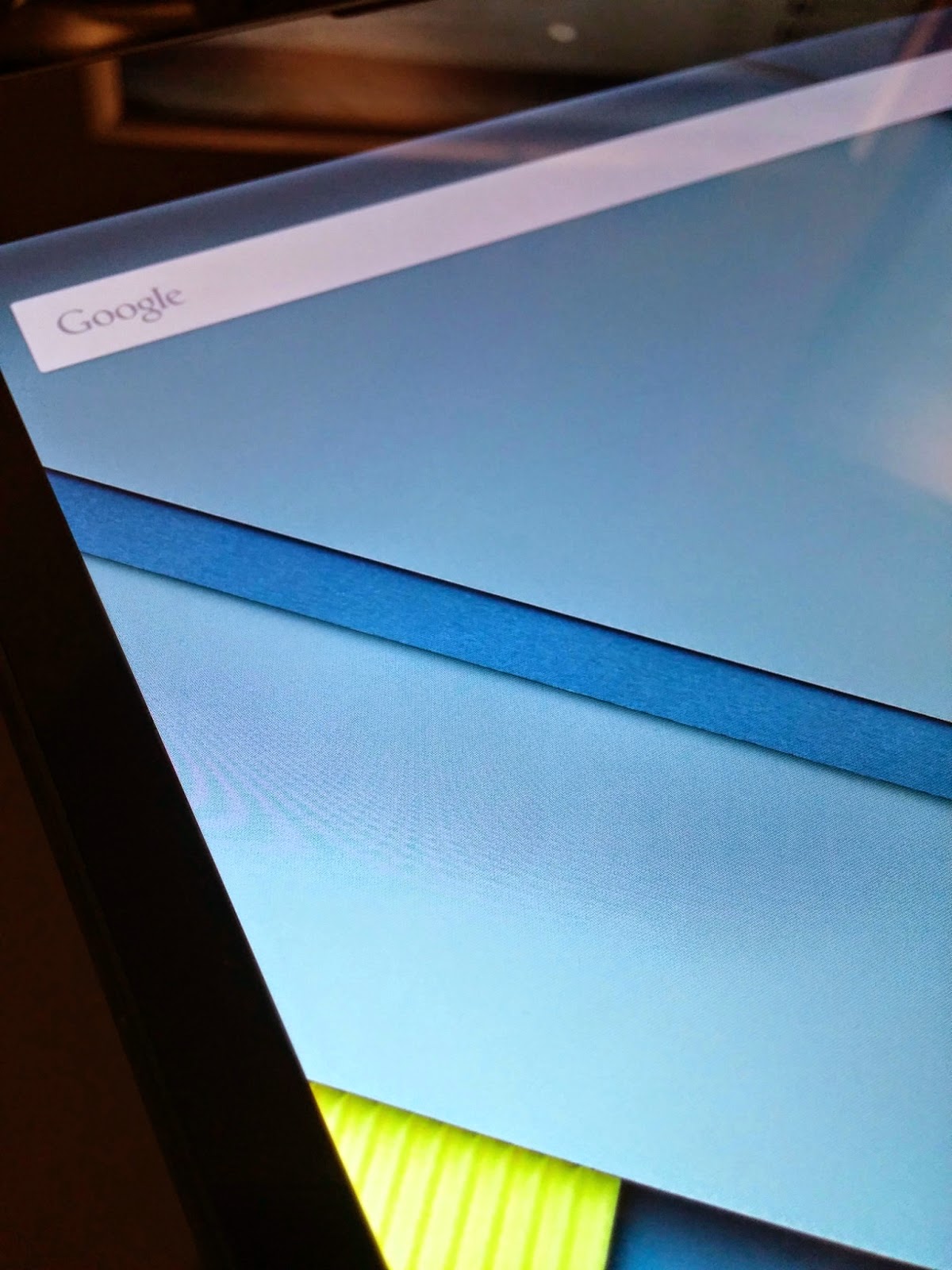 Backing - some have said that there's a bit of a give on the backing and it having some 'stickiness'.  I haven't had that issue myself.  You can tell that there's some space in there, but I'm not having any issue with it - if it bothers you I'm sure you could just pop the back off, put a piece of paper or something in there to help with the spacing.

Overall
This is a mighty tablet.  64bit architecture, native Android 5.0.  It's sluggish by no means.  And the battery can last for days.  After my first initial heavy use I had brought it down to about 30%.  I let it charge to about 50% or so and then did light usage throughout for the rest of the week.  It's at 34% now.  My Note 8 wouldn't be anywhere near that for usage (even if you halved it; and yet it's only 28% less). 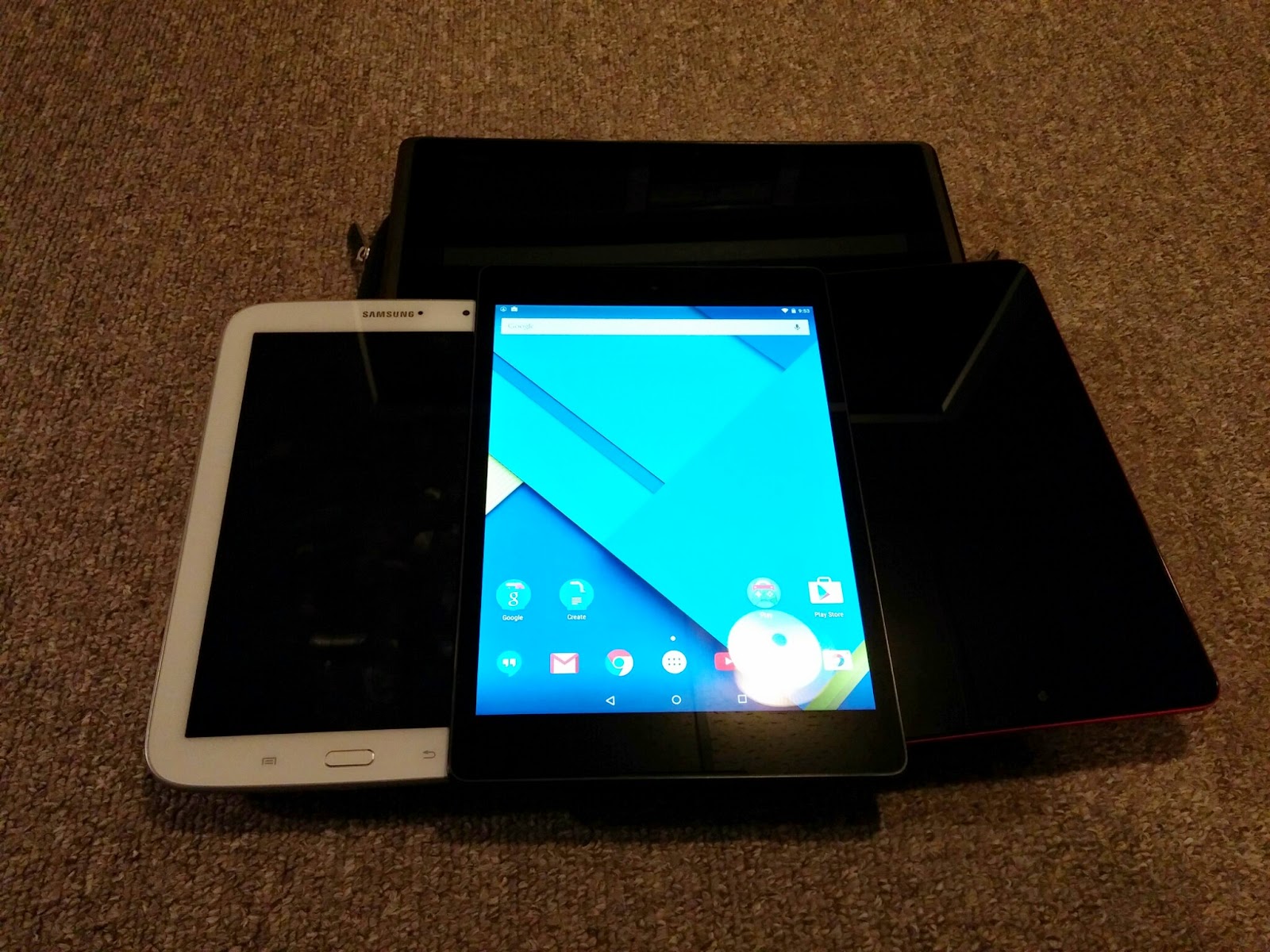