Hello Team Canada! This is +Tom Gray. I've been gone a minute, but I'm back to give my first impressions on the Nexus 6 since I've had it for approximately 24 hours. After flip flopping whether to buy the Nexus 6, I finally decided to get one, and luck was on my side as there was actually some in stock. This Nexus 6 marks my 34th Android phone I've personally owned, and with all this previous technology under my belt, I have very high expectations from my tech. We'll see if the Nexus 6 can keep my happy enough to keep in my pocket longer than 6 months.

Because I've only had the phone for only a single day, I'm not going to run this review long, and just hammer a couple points, and leave filling in the blanks to comments and questions on which I'll do my best to answer. So without further jibber jabber, let's get into it.

Motorola has proven themselves to make some fairly nice looking phones that feel solid as a rock, and the Nexus 6 doesn't disappoint in this field. 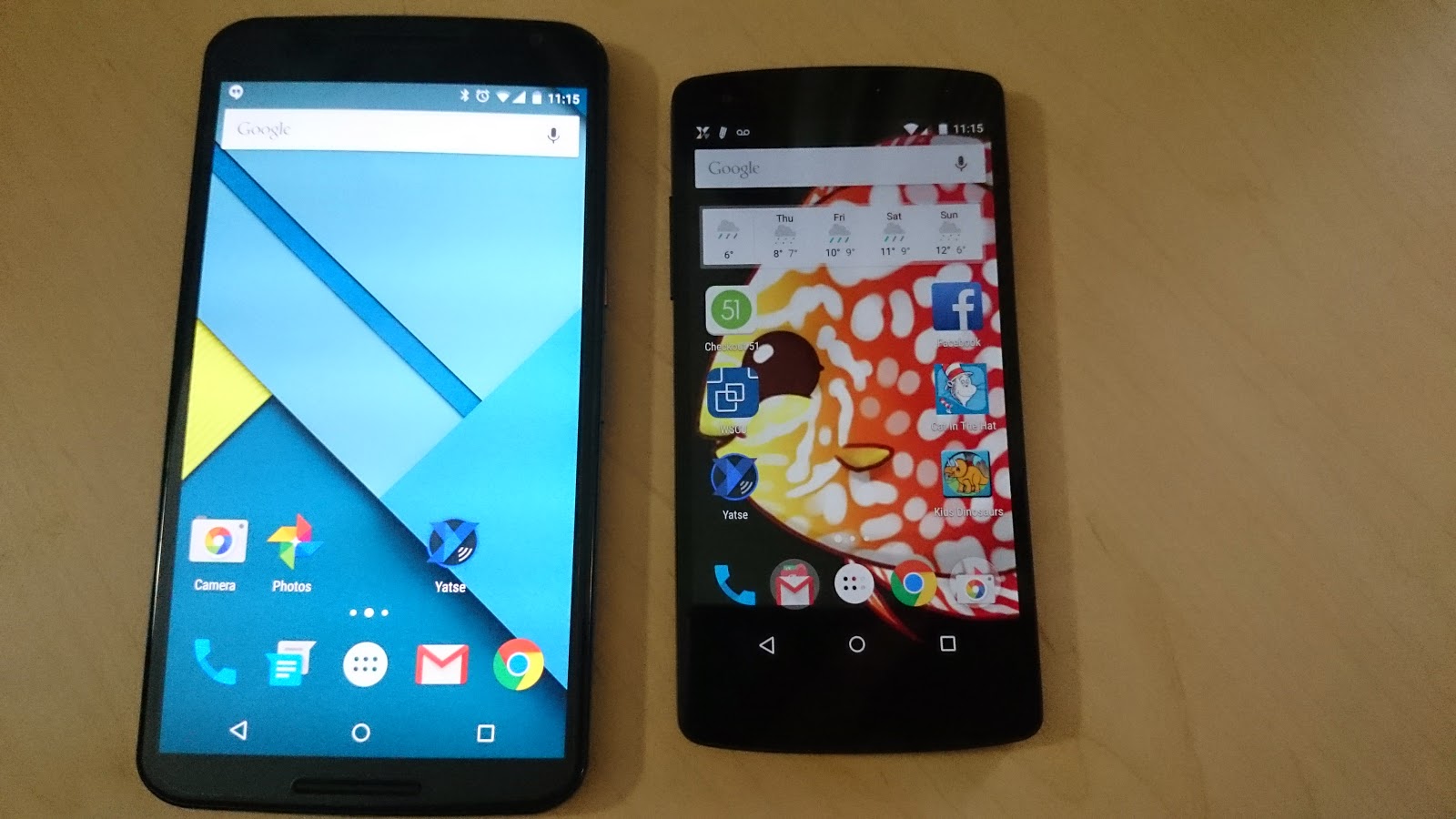 Most of my friends including my wife's first reaction was, "Seriously?... That's needlessly big" and they're totally right, however when you turn the device on and start playing on this huge 6 inch screen, it becomes abundantly clear why it's awesome to have such a big phone. That being side, you can see from the picture above just how much bigger this phone actually is compared to last years Nexus 5.

At first glance it appears this phone would be uncomfortable to hold, however with its curves and nice form factor, it really doesn't feel like you're holding a giant brick. I came from a Sony Xperia Z2 which is a flat slate all around, so having curved edges make it nice to hold.  The backing of the phone attracts finger smudges pretty easily, so if you're someone who needs to keep their phone spotless, this could be an issue for you, or at least it is on the midnight blue model.

This is probably the most important aspect of your phone, as you'll have it in your face every 30 seconds for the next year or two. Nexus 6 has an impressive AMOLED display at 1440 x 2560. Of course Motorola takes advantage of this AMOLED display and includes Ambient display, which is just a more simple form of the Moto X active display that many of us have come to love.

Despite some other reviews I've watched and read from other people, I find the screen very bright and beautiful. It maintains its visibility in outdoor environments, and of course with that amazing 1440 x 2560 display, it looks as smooth and clear as ever before. I did however find something I could complain about with the Nexus 6 screen, and that shows its ugly face at a lower brightness. Around 10% and lower brightness, your Grey and White colors start looking more pink than anything. This isn't huge deal for me as I don't often have it that low, but it's definitely something to wag a finger at.

Unlike the Moto X2 which the Nexus 6 appears to be based from, we're able to enjoy audio from both speakers, and not limited to just one speaker, which in my opinion is huge design flaw in the Moto X2. I'm assuming that based on the sheer size of the Nexus 6, Motorola likely had a good chunk of room to place some really nice speakers in here. I've come from 2 other phones that also had front speaks, the HTC One, and Sony Z2. I'd say the Nexus 6 easily trumps the Sony Z2 in volume and quality, and is equal or greater than the HTC One. These speakers by no means leaves you wishing you had more. They're impressive and loud. Being a Nexus phone, we all know what to expect when turning this phone on. We're talking pure Google Android flavour, with a slight zest seasoning from Motorola. The Nexus 6 offers us raw power with its Quad-core 2.7 GHz Krait 450 processor, combined with the Adreno 420 GPU, and there shouldn't be a single hiccup, and there isn't.

From booting up the Nexus 6, installing the latest update, updating all my apps, then meticulously going through every single app and it's settings, I didn't encounter a single stutter or slowdown. This new Android 5.0 LifeSavers.... whoops, I mean lollipop and the power Nexus 6 brings, the Nexus 6 is just 1 big 6 inch slab of butter melting in your hands.

I really wish Google would tone down the colors a little bit, I'd rather not have my phone filled with every color of the rainbow, Hence my nickname for Lollipop, LifeSavers.

Having all that power may come at a cost though, and that leads us to the next part of this first impressions review.

Having only owned this phone for about 24 hours, clearly it's too early to give an honest opinion on how the battery is. However, I can highlight a couple things.

First of all, Motorola and Google include Motorola's Turbocharger as the main charger inside the box, and this may just sound like some fancy names, but this charger is actually quite fantastic.
Last night I was at approximately 60% battery life, and plugged in my charger, within minutes I was at 65% and my phone informed me it'd only be 35 minutes to charge to 100% while I was currently using the phone. Mathematically speaking, I should be able to charge this phone from 0 to 100 in an hour and a half while the phone is in use.

Coming from a Sony Z2, I'm use to having amazing battery, where I can have about 8 hours screen time in a day. I don't feel I can hit those same numbers with the Nexus 6, as it seemed to drain faster, however it's still too early to be sure.  Having that Turbocharger handy though is a life saver for anyone on the go.

I judge my phones harshly, and I try not to let new things blind me from what's missing or what needs improvement. Having said that, here's my current state of mine.

My cons may be fixed with future updates, but there isn't a whole lot to complain about with this phone to begin with. This pretty much wraps up what I've come to learn and think about this phone within the last 24 hours of use. To this point I'm very happy and still dazzled by this large screen and fantastic sound,

If you have any questions about this phone, please feel free to leave a comment, and I'll do my very best to give you the best answers I can with device in hand.  I may be late to reviewing this phone, but as a Canadian, Google doesn't make it easy for us to buy this phone from the Google Play Store.

I'll cya all around Google+, and please share and comment and be apart of our community here at +Android Coliseum.
First Impressions Google motorola Nexus 6 Review