Posted by Ryan Moore on January 07, 2015
In my ever keeping of all the data in terms of Android, I'm updating the graph again on the Platform Distribution.

(taken from the Dashboard) 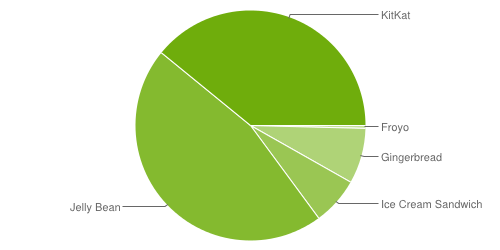 Currently KitKat Kontinues to Kickass in the numbers as it's now up to almost 40% of devices.  4.1 Jelly Bean hadn't gotten that far before it started a decline thanks to higher versions.  But even still, the growth of KitKat hasn't been seen before.  It's really had some big jumps!

To be able to envision that data, I've been keeping track since late 2012...


Here's how the versions have risen/dropped since Ice Cream Sandwich
I've deleted the column that had the duplicate entry, there was a change in how the numbers were reported... with that ridge gone you can really see the steep climb of 4.4

And here, as an overall of the graph of all versions over time.