How much does a subsidy really save you?

Posted by Ryan Moore on January 27, 2015
So we just heard today that the new Galaxy Note Edge will be available soon, and you can preorder the device for the low low price of $400.  Sure, the device is a monster, and more computer than phone, but at that subsidized price it's still more expensive than buying some devices outright.

So how much is a subsidy really?  In this case, if you got the phone on a 2 year plan you'd be saving $500 off the retail value.  Someone who's going into the market and signing a new plan this might make a lot of sense.

But, as I've discussed often in our hangouts, I'm not a big fan of upgrading a current plan to get a subsidy.  In the case of our new Note Edge.  Let's say I was paying approximately $60 a month currently (some old promotion).  To take advantage of the subsidy I'd have to sign a package with a minimum now of about $90/month.  And, to include that the plan now would be LESS than my plan earlier (I'd be losing 1GB/month).

So, over 24 months, paying $30 extra = $720 in extra fees.  Unless they're adding value to that package, I can't see why anybody would want to do that.  Pay the $500 for the phone at full outright price and keep your old plan.

Everybody's math will be a little different, so read up.

That's my main point about subsidies, but what really bothers me is how the subsidies are so inconsistent.  Sure, some carriers have a flat 'tab' amount you apply to your phone, but with the big 3 it's almost random how they come up with that number.  Take a look at our database page and you can see the carrier costs.

On Rogers, you can run through and see that the subsidy for a phone ranges from as little as $200 or as high as $650.  How is that fair?  I've done some of the math for you to take a look at for the big 3. 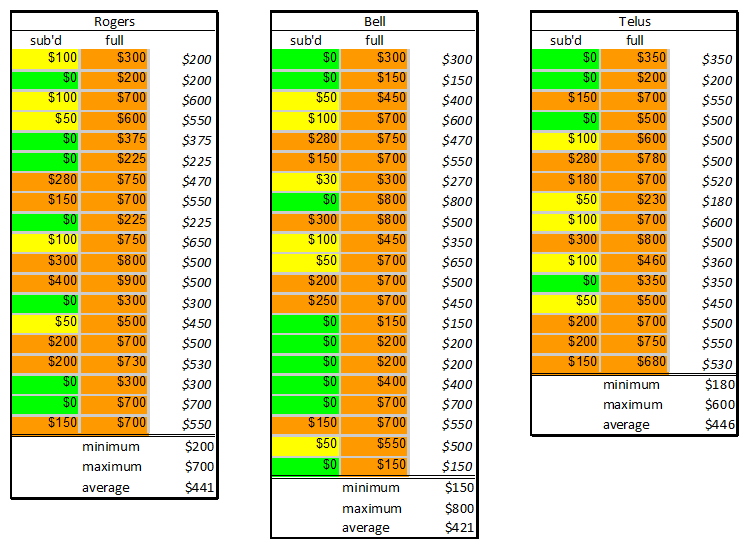 Sure, the carriers will tell you that the difference might be reflected in the device, maybe the subsidy THEY get from that OEM, etc... and then what bugs me is that 2 people with the same plan, would get 2 different subsidy amounts.

Again, it could be different numbers based on what phone and what plan you pick, but what I don't like is how inconsistent it is.  Sure, they will be transparent and tell you the numbers, so it's not a shock about what you will pay, but what they're not telling you is how others will pay other amounts.  And the only differentiator is the type of phone you've chosen, which seems like a bit of an additional tax or fee to pick what you want to pick (even on top of what you may be paying more already for that choice on the subsidized cost).

This is why I advocate to anybody who's looking to do that math.  Often it will work out in your favour to bring your own device (sometimes companies offer a discount if you do - which is another discussion for another day).

What are your thoughts on carriers subsidizing the price of the device?
carrier subsidy