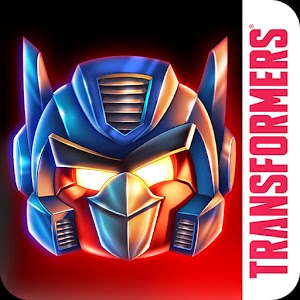 So that has taken a long LONG time.  2 weeks ago Rovio put out the Angry Birds' latest iteration:  TRANSFORMERS on iOS, and 2 weeks before that (or more?) it was available in Canada only.

Interested I tested it out on my 4S over a month ago.  It was a neat game.  But definitely NEEDED to be on Android.  The bigger real estate of bigger screens and higher resolution is a must.

I don't know why it's taken this long to do so, but my son is one happy camper.  We love the Transformer movies and his favourite is Bumblebee, so that's as far as he wants to go in the game.

The game is set up so differently than any other before (aside from Epic and Go).  I like this change up where it isn't just a version of tank wars with different looks.

Your bird team has sided with the piggies to helps stop a crazed EggSpark which has changed the birds (and piggies) beloved Eggs to robots.

To run a level to stop the robot egg you are sent running horizontally and you tap the screen where you'd want to fire your weapons.  Like other Angry Birds games, each player has different abilities. Red (Optimus Prime) is good at destroying glass, Chuck (Bumblebee) destroys wood structures.  Others (names are escaping me) have stronger blasts and may be slower...

Throughout the level enemies are firing at you, or blocks are falling on you (transform to the vehicle to speed past the danger).

You can unlock other characters depending on how many piggies you've 'popped'.  And then they can be upgraded with coins you get in the levels (but it takes time, you can speed it up with crystals.  In the iOS version I have a glitch has occurred and I now have 15,000,000 crystals... so I get all the upgrades I want - unfortunately there's no setting up a Rovio account to sync your data across the iOS/Android divide).

Other upgrades you get allow you to either call in airstrikes or have an EMP blast or shields (depending on the character) which you get ammo for by destroying robotized structures in the background.

Later you can do some team ups - i.e. allow a companion to jump in and help with the carnage for a few moments.

It's a great game... and simple to play.  However to get the upgrades and coins necessary means A LOT of play time (just like Go) ... or you can pay for extra coins/crystals.

The other twist is that any damage you incur in the game is cumulative, meaning if you take 1 heart of damage in a level if you want to fight at full health you'll have to pay to heal him.

My biggest complaints are the point where you get the Terrence character ... very slow firing, but heavy damage.  The problem is you get to a point where rockets are firing at you ... if the rocket hits you, you transform into a washing machine for a few minutes (meaning you take a lot of damage).  You can't hit the rocket until it's 'in range', and at that point there's no time for your weapon to hit it.  Place that when you're about to go past the falling stones or the mega egg robot who fires the huge burning rocks... you're destined to just have a bad time.

After all that you'll like this game. Each level is short, so it's enough to keep you entertained for a bit... just don't get frustrated that you won't be upgrading any time soon, unless you're willing to pay a lot.  Even playing a lot wouldn't help as you'll find that you run out of areas to attack (if you want to have more areas you either have to intercept ones at a cost of crystals, or pay for more areas to open up.  The math just adds up to "you need to pay to really play'.

Look for plenty of videos of Dean and I playing it.