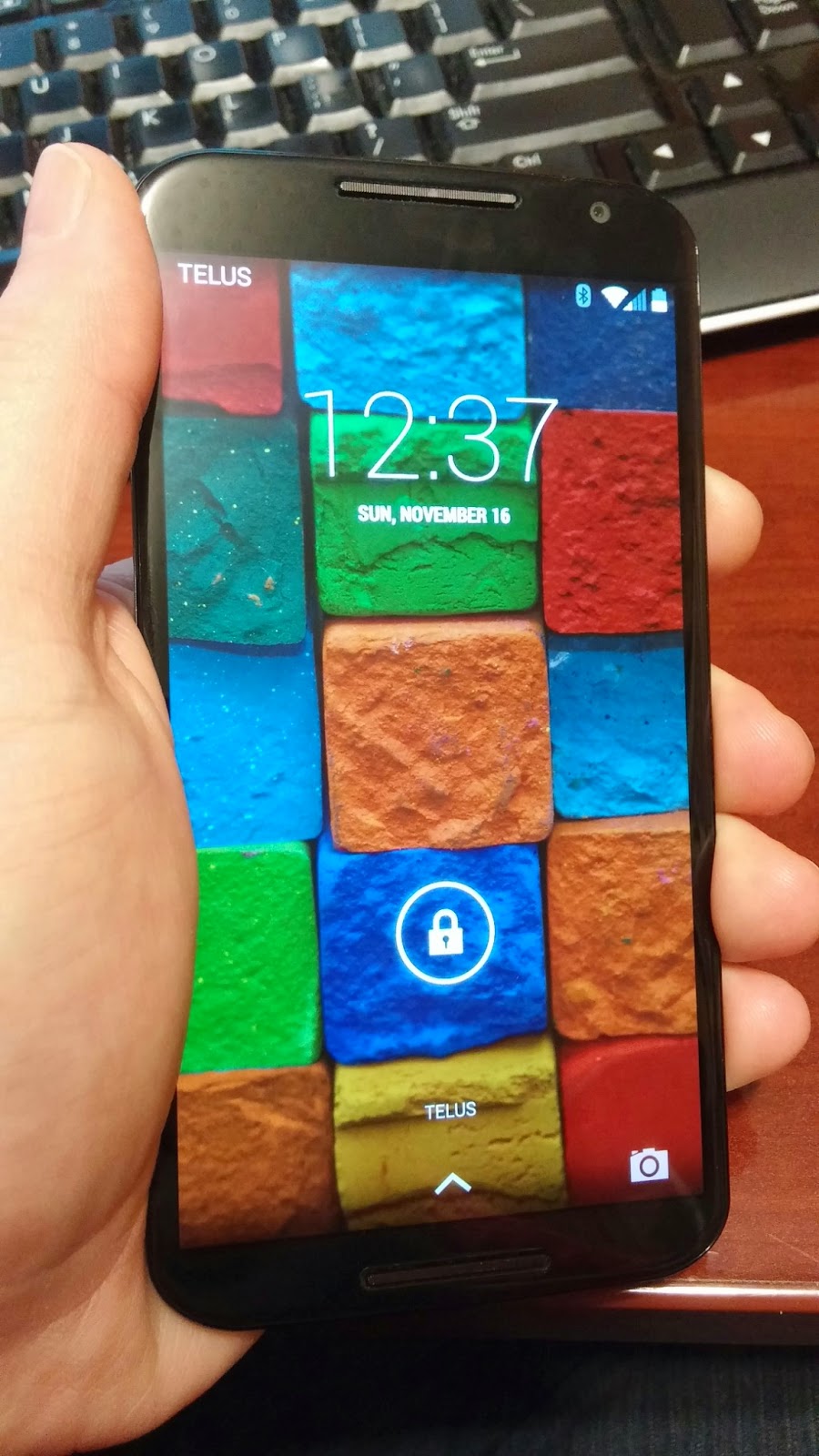 I've held in my estimation that the Moto X was really the most underrated device for a while.  It only really started to sell well at the store when it went down in price, or when it was allowed on non-smartphone plans (I long debated telling someone who wanted to get a flip phone, to get the X, and then I'd just buy a flip phone and swap them).

Anyhow, the Moto X at the time was really great, but under-hyped.  This year's edition has taken some time to make it to the Canadian shores, but it's here, and it's upped some of the features from the previous (if you ever wanted to see the comparison of flagship devices, don't forget to visit our database page).  So how does it stack up?

I've given it a go for about a week now and I love it.  It's come up shy against my G3, but if I didn't have that, I would really recommend this new X.  It's exactly what I like... near Nexus enough, simple and powerful!

Let's dive in to the review


So let's see the specs of this thing:
Currently it's running at Android 4.4, and I'm just waiting for it to get the new 5.0.  The 'pure editions' are getting it now, so we shouldn't be too far behind.

I'm glad they went for a proper HD display and the Snapdragon processor.  It was so hard to explain to folks that last year's dual core really was an octacore.

I would have much rather seen a 32GB version as 16 is really close to the wire for me - and I would have preferred to have seen a bigger battery bump.  But the battery doesn't last too bad all things considering.

In terms of specs, I feel better actually comparing it to my G2, rather than my G3, but it really does handle much better than my G2, so my 'base' will be the G3.

It has a rubbery back, which helps for gripping, but it's a grease magnet.  The metal edge of the device really REALLY makes this thing feel super solid and structurally sound (no #bendgate here). Both power and volume buttons are on the same side, like my Note 8, and unlike the Note, it differentiates the power with a ribbed texture, so it's easily found (unlike my Note 8). I find the ~5" size is perfect for one handed operation and the fact that it's really thin with a bit of grip and the metal banding... it's making for a really solid feel in your hand.

There's stereo speakers... like the HTC One... but unlike the HTC the top speaker isn't for games or music, it's just for your earpiece, so it kinda lies to you there.  That aside, the speaker does have some oomph.  The speaker grilles also have that lined ribbing like the power button.

It uses a nano-SIM, so keep that in mind - oh and it's on Telus; so if you're hoping to bring it to your carrier, that's a bit of a hassle (buy it unlocked somewhere or have to go through a rigmarole with Telus to buy it outright and then pay to unlock it).

Software
Did I mention that this is as close to a Stock Nexus device you can get without it being a Nexus?  That's what this is like.  A Nexus with just some Motorola features added in.

The active display is neat, but I find that it's a bit too sensitive.  As soon as I get near my phone the display comes on.  Which is alright, but to unlock you can only swipe the lock downwards (whereas on the normal lock screen you can move the lock wherever you want to unlock.

There are plenty of Moto apps and features thrown in for you to take advantage of ... whether you use them or not is up to you.

Lots of features.  Face tracking (so it knows when you're looking at it), waving your hand over the screen to show the notifications, flick of the wrist for camera, voice recognition and much more.

Oh, and I have to include the Spotlight series.  My kid loved them.

There is even 'connect' apps to let you connect your Moto 360, or your computer and allow it some control and activity with your device.

Performance
The device performs very well... when you think "oh, it's got the engine to run, but only 2GB of RAM" you're not thinking properly.  It handled everything I did with it without any stutters ever.   Well, maybe when I was out Ingressing and it was cold... but I think that was network congestion and it being cold.  Not the device. So don't worry about any hiccups while using.

In fact it handles a little too well, especially in the area of touch sensitivity.  But you'll love it.

The battery is something I was concerned with, but again it handled itself quite well.

As it was Telus and locked, I couldn't use it for my daily driver (i.e. handle my cell phone calls and texts, everything else it did).  That aside, I pushed it when I would use it on my work breaks and made it my ingress device. It still lasted about 12 hours with about 3 hours of screen time (see the photo above).

That's pretty impressive as I was expecting it to be much less than my G2 but it handled just below it, and about on par with my G3.  Impressive.

In the original X, the camera was... meh.  But then an update allowed it to tweak the rendering and started to produce some nice quality photos.

The new X still has some artifacting on the photos, but still produces a very nice quality picture.  I'd show some off, but with summer well behind us the outside is more grey, and wouldn't let the camera show itself off.

I'm not a big fan of the Moto camera app... I had to take of the instant touch to take a photo because I'm used to tapping to focus.  There is an option to set up that if you 'drag' you'll drag the focus spot ... giving you that moment.  I find a lot of my photos with their app blurry.

Otherwise there's nothing wrong with their app, I'm just not used to it. Overall
The biggest downfall of the device is that it's a TELUS exclusive.  That really eliminates a lot of potential.  Sure, Telus is #2 in the country, but I'm just not a fan of these exclusivities.  If it were possible to get the device unlocked from Motorola, like you can in the US, that might be mitigated... however, we're not so lucky up north.

In the end it's a really good Nexus device that will get updates pretty fast (history has shown the Moto line has been quick) with very little intrusion of their added features.  Unlike Samsung and LG where they totally reskin and then the extras are always in your face, with Moto, if you don't like them, they're easy to set aside.

I think this will be again an under-hyped phone that many will dismiss as they look to Samsung or HTC etc... but this gem is probably the best bet for most out there.  For $100 on a 2 year plan, or $600 outright, that's priced well below most flagships