Lenovo has some new YOGA tablets

Not really news, as we had seen these at events prior, but we're intrigued, and as Lenovo's not really much of a big player in Canada, we got some details that we can share finally.

First up is the Yoga Tablet 2 Pro. 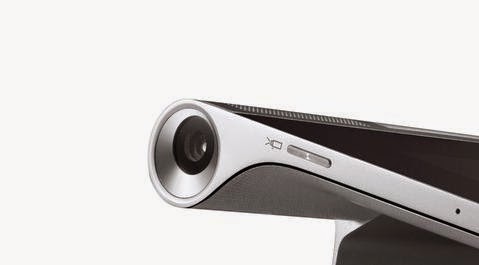 Yeah, this is the one with a projector built in!

The projector will go up to a 50" screen

Also, as with other Yoga tablets it has the little 'lip' part that flips around to act as the stand.  This time around they've put a little hole in it, which will act as a 'hanger' for the device if you want to leave it on a wall or something.

Kinda neat.  They're listing this out at $550.  Which seems a little pricey if you look at the tablet specs alone, but having the ability to broadcast your screen up to a 50" is pretty neat and brings some unique value add.  I just think it'd be a little awkward to turn it sideways to do so.

The Yoga Tablet 2 is lacking the projector that the other does and comes in both Android or Windows flavours.  We'll just look at the Android; which comes in an 8" size as well as a 10" size.

No word on if they will be sold at Best Buy (like the Yoga 3 Pro, which is a Windows based version)