LG G3 is here and I like it [first impressions]

So it's here, and I've got to play with it for a bit now. I've been quite excited to try it out; but I haven't had a lot of time to play with it as I was giving the OnePlus a fair shake, and I had some other items I was given to review and wanted to get those done in a proper time.  But, I think you deserve my first impressions

So let's take a look at what the G3 delivers as compared to other phones I have in my reach now...


The OnePlus is taking it in terms of some features... but only in the Front Facing Camera, +100mAh, and 64GB is nice ... but you've seen my thoughts on that phone.  But what do I think of this phone?

It definitely has the right 'feel' ... it's surprising how easily you adjust to the back buttons.

It is larger than the preceding G2 model in screen size, but is only marginally larger over all...


Definitely enjoy being back on LG... sure it's interface can be as bad as TouchWiz... but I like it, oddly enough.  It's got some quirks like the G2 did (like if you want to make folders in your app tray you have to put it in custom mode, then click edit, then folderize, then save, then put it back in alphabetical ... otherwise you're organizing ALL of the apps... ugh).

Having the same processor and RAM as the OnePlus is weird because it outperforms the OnePlus easily.  Haven't had a slow down yet.

The plastic back is a little weird to feel ... especially as it's removable this time around.  It feels somewhat 'empty' , whereas the G2 felt solid; I dunno how to really explain it.  Go grab a Nexus 5 and an S4 and just feel the backs and you'll understand.

Speaking of the back... I swear when they announced the G3 it was going to be Qi wireless charging out of the box.  Not so.  I'm hearing it might be PMA wireless charging, but I haven't got a charger to test out on it.  That would suck as it was something I was really hoping on as I loved being able to rest my Nexus to charge it up.  When you take the back off it only has the sticker with 2 contacts on it... which is making me think that it might only have NFC back there... I'm waiting to hear back from LG as to the official word.  There seems to be some confusion out there on which version gets which. 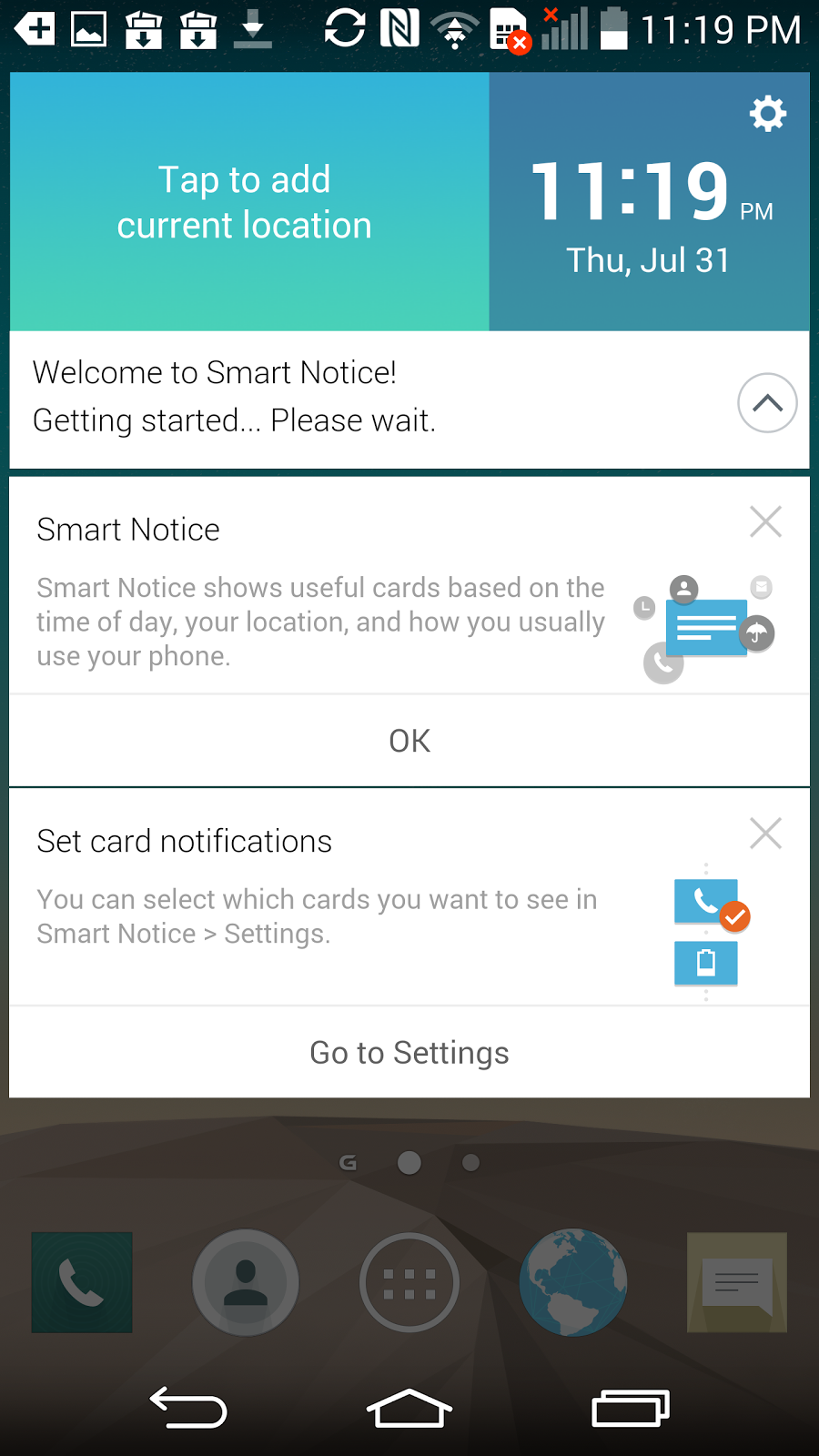 Everything else in the device is quite similar to the G2, which I really loved, it just has a little comic-y look to it (not comic = funny, but comic book, cartoonish) which is a nice simple design.

The new "Smart Notice" is quite cool...

Battery life is pretty good.  Not as good as the OnePlus (but the OPO isn't powering an QHD display).  It's about the same as the G2 was.

As for the screen.  You don't really notice the extra resolution unless you really look... it's odd ... it's like being in an office that has a white noise generator that you get used to, and then go back someday when it's off.  It's like that with other displays... you don't notice the pixels, but then you don't on the G3, go back to the G2 and you can start to see them.

I haven't really tried to push the G3 to the display limit yet, ... it's just nice to have the extra pixels (in case you need 'em... because then you'd have 'em - go ahead, name the show that quote's from).

Anyways, I think that's a good teasing amount at first here.  If there's anything else you want to hear, just drop me a line!
First Impressions G3 LG quick review Review