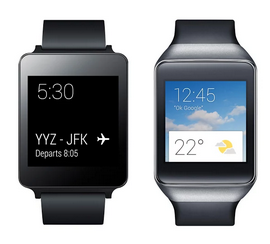 In the line up there's only 2 contenders at the moment:  Samsung's Gear Live and LG's G Watch.

+Mark Lastiwka has purchased the Samsung and +Sylvain Le Bourhis has picked up the LG.

They're about to do their own reviews of each and I wanted them to collaborate on a joint article... but, what do you want to know about the watches?

Sound off in the comments about what you'd like to see each talk about in their reviews.

Other watches in the AC midst:  +Ryan Moore is using the Sony SW1 (ordered the G Watch); +Cass Morrison is using the Gear Fit, and +Tom Gray had recently given up his Galaxy Gear 2 when he went to the Z2.