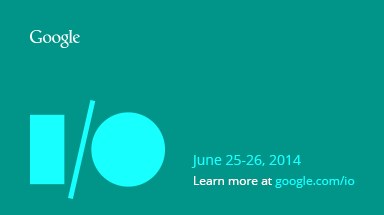 So, it's that time of year again.  Google I/O time.

Been a little over a year since the last event, and there was quite the hullabaloo last year and outcry over some of the expectations.  Like last year I made some predictions, and well... I wasn't near half right. [http://www.androidcoliseum.com/2013/05/google-io-2013-lets-compare-notes.html]

But, let's take a grain of salt with all the leaks and rumours we've heard about recently and let's have a discussion about what we might expect to see tomorrow (all my own speculation, mind you).

Notice how a lot of what was talked about wasn't necessarily OS related, or device (sure there were Play Editions, but they were already released, just now released with the Google version).

At IO it's really about the developers, and highlighting all the services that Google offers. Android is just a small part of that

So here's some of my thoughts on what we might see tomorrow.  I'm sure there's some rumour folks out there that will tell you that "WE SHALL SEE PRODUCT Z released".  Maybe... but I'm doubtful.  What do you think we'll see?  Here's my list

More Android @ Home
Sure, I called this last year and it never happened.  But Google has purchased NEST.  And now there's the release of the NEST APIs.  So it may not be "Google/Android @ Home", but it'll showcase some of those options we're all hoping to see to turn our 'homes' into 'smart homes'.

Android Wear
This is a no-brainer.  This has been showcased again and again.  We've even heard that attendees at IO'14 will get the G Watch.  (Curses you lucky SOBs).  It'll be interesting to see what exactly these new devices will be able to do, after all the teasing we've head.
Will we see the fabled "Gear Wear"?  After all of Samsung's Gears had switched Tizen (much boo'd, yet really, did anybody notice?), an Android watch won't be of much difference to me.  As long as it shows me my notifications.

ART vs. Dalvik
It's been almost a year since the ART compilation had hit with Kit Kat.  Will it have been enough time passed to switch over?  I don't think we're going to see a new iteration of Android (why would they patch out 4.4.4 only to provide 5.0 a week later?), yet I think the emphasis will be on the developers to now really start implementing support into their apps as the next big iteration might just make that switch the default.

Glass 2.0
Well, it sounds like this might already have happened with a new hardware revision.  So let's see what some of the new Glassware options will look like.  With it opening its doors now to the UK... the ecosystem is starting to evolve.

Android TV
This has long since been rumoured, and those of us who still have our Google TV boxes have been languishing for something new.  With "Android on a Stick" devices becoming really popular and the Chromecast becoming HUGELY popular, something would need to come out to provide an 'evolved' form of Chromecast.
Now, will this be a separate box like GoogleTV, which didn't really take off; or will it take the form more like 'casting' has?  I'm wondering if they're just going to go balls-out and OEM up?  Who knows.  We'll have to be patient.

Google+ features
Oh you can bet there'll be more.  What?  I dunno.  I'm hoping for an app redesign (yes, I know... again)

Cloud Options
Now, we've seen what Google Cloud Messenger can do, but I think it can go further.  I'm hoping to see an implementation of more 'backing up' of app data, potentially even full on Android data backup.
Plus, I'd love to see a redesign of the Google Drive app.

Silver
Hrmm... me no likey what I'm seeing thus far about this fabled line up that will be the Nexus killer.  But we might start seeing the start of what it could be ... especially as we're seeing that the Google Play Editions (well, those of you not in Canada can see) are all out of stock.

Android 4.4.5
I know we just got 4.4.4 (a fix for SSL), but there's been a lot of folks hurt over the new security features that 4.4 offers, i.e. breaking of full access to the SD card.  Sure, if you root (and if you do, I really recommend TowelRoot) it'll fix that problem... but maybe we might see a potential workaround on Android's end.

Youtube
There's been so much discussed about an update to allow Youtube to run in the background, plus some rumblings of an "All Acces-like" subscription service.  I think we'll be seeing some new 'direction' for Youtube.